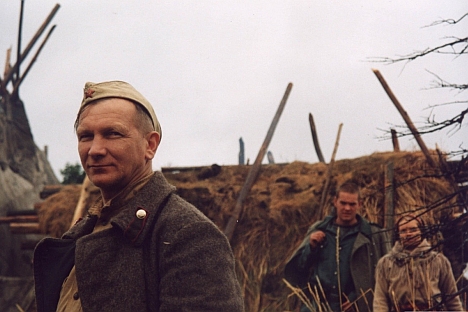 Among the more recent Russian movies about World War II, Rogozhkin’s "The Cuckoo" may be the most satisfying. Source: Kinopoisk

Ahead of Victory Day, check out our list of five war movies from Russia/Soviet Union.

Soviet cinema’s critical engagement with the war began in many ways with Kalatozov’s film, which was voted by Russian critics in 2008 as the best film of the first 50 years of Russian cinema. Kalatozov’s film was the first among many classics from the Thaw era that dealt with the war’s significance, preceding Grigorii Chukhrai’s "Ballad of a Soldier" (1959), Fedor Bondarchuk’s "Fate of a Man" (1959), Chukhrai’s "Clear Skies" (1961), and Andrei Tarkovsky’s "Ivan’s Childhood" (1962).

The Cranes are Flying focuses on Veronika, who has seen her boyfriend Boris off to the front and who deals with the hardships the war causes at home. Tatiana Samoilova’s nuanced performance is one for the ages.

Banned for 15 years, German’s first film tells the story of a Soviet soldier who defects to the Nazis, then switches sides again to fight with Soviet partisans. Based on his father’s novel and adapted by Eduard Volodarskii (who has written a number of important films dealing with the war), "Trial on the Road’s" examination of concepts such as “patriotism,” “hero,” and “traitor” remain profound.

“Trial on the Road” was censored and taken out of circulation in the Soviet Union for 15 years after its release due to its unflattering depiction of Soviet soldiers. Source: Youtube

German also directed another classic about the war, "Twenty Days Without War" (1976).

Bondarchuk, a veteran of the war, first turned to it onscreen with his 1959 classic, "Fate of a Man". After making the six-hour epic adaptation of "War and Peace", which won the Academy Award, he returned to World War II in "They Fought for the Motherland".

The film was selected as the Soviet entry for the Best Foreign Language Film at the 49th Academy Awards in 1977, but was not accepted as a nominee. Source: Youtube

Set in July 1942, as the Red Army begins to battle at Stalingrad, the “they” in the movie are broken, wounded, weary, older, complex individuals. Bondarchuk decided to have this collection of soldiers defend a small, relatively unimportant plot of land. In the end, after defending some far-flung locales, the regiment, which has lost all of its officers, is told they will head to Stalingrad.

Klimov’s masterpiece, set in occupied Belarus, is the story of Flyora, a young boy who gets caught up in the conflict and who stumbles through the hellish landscape that was the Eastern Front. Klimov’s film has consistently been cited as one of the best, if not the best, film about the war ever made.

When it appeared in the U.S., Walter Goodman declared that its “history is harrowing and the presentation is graphic” while its director was “a master of a sort of unreal realism that seeks to get at events terrible beyond comprehension.”

Among the more recent Russian movies about World War II, Rogozhkin’s "The Cuckoo" may be the most satisfying (Dmitrii Meskhiev’s 2004 "Our Own" is also worth a watch). In it, a Finnish soldier who was conscripted to fight for the Nazis and then chained to a rock after being labeled a pacifist, makes his way to the house of a Sami woman whose husband has also left to fight in the war. She is nursing an injured Soviet soldier who was sentenced to death for anti-Soviet activities but who managed to escape his execution.

Rogozhkin’s film explores the way misperceptions and differences in language affect the way the three view each other, often with comedic effect.