The Badaber uprising and its aftermath 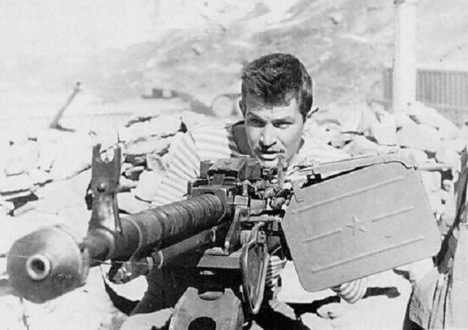 The fierce battle that lasted all night and the losses among the Mujahideen demonstrated that the Russians were not going to surrender. Source: Russkaya Semyorka

The entire world, except people of the USSR it appears, knew what happened at Badaber fort near the Pakistani city of Peshawar on April 26-27, 1985. The Western media believes that the KGB did avenge the deaths of the Soviet war prisoners killed at the secret prison in Badaber.

Badaber fortress outside Peshawar was a centre where the Americans (along with the Pakistanis) imparted military training to Afghan groups to combat the Soviets. The Americans converted the fortress jail at the beginning of the Cold War into the Peshawar centre for the CIA in Pakistan.

During the Afghan war, the village of Badaber supposedly hosted a centre for humanitarian aid, to cater to Afghan refugees and prevent them from starving. But in reality, it served as a cover for the military training centre for the Afghan counter-revolutionary party Jamaat-e Islami, which secretly held Soviet prisoners of war who were considered missing in their homeland.

30 years ago, on 26 April 1985, when the Soviet Union was preparing for the forthcoming 40th anniversary of Victory Day, shots were heard at around 1800 hours at the fortress of Badaber. Taking advantage of the fact that most of the guards at the camp had gone to perform their evening prayer, a group of Soviet prisoners of war reportedly “eliminated” two guards at the fortress armoury, procured weapons, took over the fortress’ radio control centre, freed other prisoners and tried to escape.

As former Afghan president and leader of the Islamic Republic of Afghanistan Burhanuddin Rabbani recalled, one of the Soviet soldiers (called Viktor Duhovchenko, according to Wikipedia) led the call for the uprising. He managed to disarm the guard who brought the prisoner’s their soup. Then he released prisoners, who seized weapons left by the prison rangers.

There are divergent views of what then transpired.

According to some sources, the rebels tried to break through to the gate in an attempt to escape. According to others, they aimed for the radio tower through which they wanted to contact the Soviet embassy. The fact that Soviet prisoners of war were being held captive in Pakistan would be significant proof of Pakistani intervention in Afghan affairs.

The Soviet prisoners managed to seize control of the armoury and to take suitable positions for the destruction of the guard posts. They had heavy machine guns, mortars (M-62) and anti-tank hand grenades at their disposal.

The alarm raised the entire staff of the base - about 3,000 people, together with the instructors from the United States, Pakistan and Egypt. But their attempts to storm the positions of the rebels were defeated.

At 2300 hours Rabbani raised the regiment of the Mujahideen Khalid ibn Walid, surrounded the fortress and asked the rebels to surrender in exchange for their lives. The Soviet rebels countered by saying they wanted to communicate with representatives of the embassies of the USSR, the Democratic Republic of Afghanistan, the Red Cross and the United Nations. When he learnt that his offer had been refused, Rabbani ordered the storming of the prison.

The fierce battle that lasted all night and the losses among the Mujahideen demonstrated that the Russians were not going to surrender. Rabbani himself nearly lost his life in the line of fire from the rocket-propelled grenades. Seeing the resistance, all available forces were launched against the rebels, with salvos fired by tanks and even the Pakistan Air Force.

What happened next will probably remain a mystery forever.

According to declassified information, signals provided by the 40th Army radio intelligence, which intercepted the report of a Pakistani pilot, a bomb attack against the rebel prisoners hit a military arms depot containing two million modern rockets and shells, among other weapons.

One of the Badaber prisoners, Rustamov Nosirzhon Ummatkulovich, later described the scene: “Rabbani went away and shortly after, the cannon appeared. He ordered them to fire. When the cannon fired, the cannon ball landed straight into the ammunition depot causing a powerful explosion. Everything blew up. People, buildings, everything was gone. The place became ground zero and black smoke bellowed out.”

There were no survivors. Those who didn't die in the fiery explosion were killed by the attackers.

However, an intercepted message from the American consulate in Peshawar to the US Department of State said, “Three Soviet soldiers managed to survive the crushing of the uprising.”

Around 100 Afghan Mujahideen, 90 Pakistani soldiers, including 28 officers, 13 Pakistani officials six American instructors were killed in the blasts, which also destroyed the prison archives, containing information about the prisoners.

To exclude the possibility of any repetition of the incident, Gulbuddin Hekmatyar, leader of the Islamic Party of Afghanistan, ordered a few days after the incident that “Russians are not to be taken prisoners.”

Despite the Pakistani authorities taking all possible measures to cover up the incident; including absolute silence on pain of death, and ban on the entry of outsiders into the area of the fort; information about the Soviet prisoners of war and the brutal suppression of their uprising leaked into the media.

First to write about it was the Peshawar magazine ‘Sapphire, but that issue was confiscated and destroyed. The ‘Muslim’ newspaper of Pakistan went ahead and still published this news, which was immediately taken up by the mainstream media.

The Old and New World interpreted the incident differently. Europeans wrote about the unequal fight of the Russian prisoners of war for their freedom, while the ‘Voice of America’ talked about the powerful explosion, which killed dozens of Russian prisoners and the same number of Afghan government soldiers.

The US State Department on April 28, 1985 released a “comprehensive” report that stated: “The humanitarian camp area of approximately one square mile was buried under a dense layer of fragments of shells, rockets and mines, as well as human remains. The explosion was so powerful that locals were coming across the fragments at a distance of 4 miles from the camp, where 14 Russian paratroopers were kept, two of whom survived the uprising’s crushing.”

The fact that the uprising occurred was confirmed by the representative of the International Red Cross, David Delanrants, who visited the Soviet Embassy in Islamabad on May 9, 1985.

The Soviet Union confined itself to an official note of protest from the Foreign Ministry, which claimed the government of Pakistan was fully responsible for the incident, and called for conclusions about the consequences of the State's participation in the aggression against the Democratic Republic of Afghanistan and the Soviet Union.

Officially, there “could be no Soviet prisoners of war in Afghanistan.”

Revenge of the KGB

There was, however, an “informal reaction” from the Soviet Union. According to the journalists Karlan (Kaplan) and Burki (Burki S), the Soviet secret service conducted a series of operations in retaliation against the attack.

On May 11, 1985, the Soviet Ambassador in Pakistan Vitaly Smirnov said that the Soviet Union would not let this incident go unanswered.

In 1987, as a result of the Soviet raids into Pakistan, 234 Mujahideen and Pakistani soldiers were killed. On April 10, 1988 a powerful explosion occurred in the ammunition depot at Camp Odzhhri, located between Islamabad and Rawalpindi, leading to the death of between 1,000 and 1,300 people. Investigators concluded that it was a diversion.

Some months later, on August 17, 1988 the C-130 plane carrying President Zia crashed, killing him and the American Ambassador Arnold Raphel, who was also on board. Pakistani intelligence agencies directly linked this incident to the KGB's retaliation for Badaber.