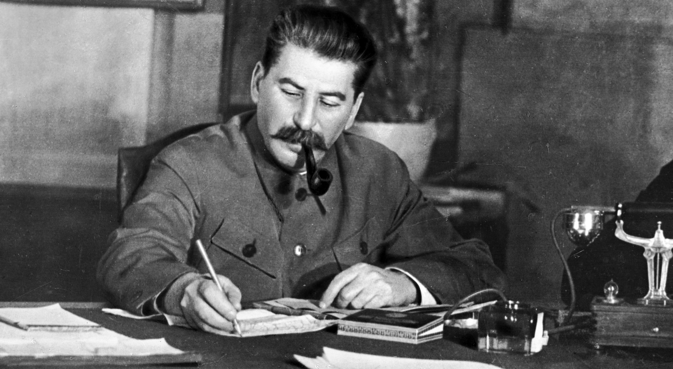 A reproduction photo of Joseph Stalin, General Secretary of the Central Committee of the All-Union Communist Party (Bolsheviks), in his office. Source: RIA Novosti

As Russia debates the rehabilitation of Joseph Stalin in the run-up to celebrations of the 70th anniversary of victory over Nazi Germany in the Great Patriotic war, the name of Stalin, the man credited with leading the Soviet Union to that epic victory, has been in the news in India, in connection with a 70-year-old mystery: the death of Indian freedom fighter Subhash Chandra Bose.

There is a debate on in Russia about the rehabilitation of Joseph Stalin, the man credited with leading the Soviet Union to that epic victory over Nazi Germany in the Great Patriotic war. As Russia prepares to celebrate the 70th anniversary of the victory over fascism, the name of Stalin has been in the news in India. Not in connection with his leadership of the Soviet Union or his rehabilitation, but in connection with a 70-year-old mystery: the death of Indian freedom fighter Subhash Chandra Bose.

Bose, a former member of the Indian Congress party, left the party and India in 1940 to seek assistance from his “enemy’s enemy,” the forces in Germany and Italy and then Japan. His ‘enemy’ was Britain (he, like other Congressmen and most Indians, wanted the end of British colonial rule in India). When Britain declared war against Nazi Germany in 1939, Bose saw a chance to liberate India by aligning with the ‘Axis’ powers, Germany, Italy and Japan.

After forming the Indian National Army, Bose tried to use military means to liberate India, with the help of the Japanese. When the tide turned against the Axis powers, Bose tried to go to Russia in 1945 to seek assistance but allegedly died in a plane crash in Formosa (now Taiwan).

Claiming that Bose did not die in a plane crash in 1945 but was killed at the instance of Soviet dictator Joseph Stalin, BJP leader Subramanian Swamy said he had papers to back his claims.

He wants the Indian government to declassify the secret files relating to the mysterious death and disappearance of the “great Indian freedom fighter” Bose in August 1945.

Swamy, a member of the ruling BJP and a former Union Minister, blamed Stalin of killing Bose in captivity in Siberia.

"According to the papers that exist with us, Bose had faked his death and escaped to Manchuria in China, which was then under Russian occupation, hoping Russia would look after him. But Stalin put him in a jail in Siberia. Somewhere around 1953, he hanged or suffocated Bose to death," said Swamy.

Swamy also claimed that the then Indian Prime Minister Jawahar Lal Nehru was aware about Bose being held captive in Yakutsk Prison in Siberia.

The Indian government has now formed an inter-ministerial committee to review the Official Secrets Act in context of demands to declassify files related to Bose's death or disappearance.

According to a senior government official, declassifying these files will affect India’s relations with Russia and with Great Britain. The official also said there is no move by the government to rehabilitate Stalin. The Indian government view about Stalin today is in line with the West, and has been since the time that (Nikita) Krushchev denounced Stalin.

According to Swamy, Prime Minister Nehru had good relations with Stalin, who viewed the Congress Party more favourably and supported them over the Communist Party of India.

According to Sucheta Mahajan, Professor of History at JNU, a delegation of four leading members of the Communist Party of India who went to meet with Stalin in 1953, to seek support for their cause to overthrow the Indian government, were told to return to India without being given assistance by the leader of the Soviet Union.

When Stalin died, the Indian Parliament was adjourned as a mark of respect to him. The Indian Parliament does not normally close when a foreign leader dies, but Prime Minister Nehru himself moved an adjournment motion to honour Stalin, whom he called “a very great man.”

In his tribute to Stalin on March 6, 1953, Nehru said: “Perhaps no single figure has moulded and affected and influenced the history of these (last 35) years more than Marshal Stalin. He proved himself great in peace and in war. He showed an indomitable will and courage which few possess. Perhaps when history comes to be written about him, many things will be said and we do not know what varying opinions may be recorded in subsequent generations. But everyone will agree that here was a man of giant stature, a man who, such as few do, moulded the destinies of his age and although he succeeded greatly in war, a man who ultimately will be remembered by the way he built up his great country,” said Nehru, speaking in the Parliament. “So it is right that we should pay our tribute to him on this occasion, because the occasion is not merely the passing away of a great figure but, perhaps in a sense, the ending of an era in history.”

Nehru also disclosed in Parliament that when news of Marshal Stalin’s serious illness came, he was reading a long report from KPS Menon, the Indian Ambassador in Moscow, about the recent interview which Stalin had given the Ambassador. In that interview, Stalin expressed his goodwill for India and his desire that world peace might not be broken.

“It was interesting how he discussed with our Ambassador some of our cultural problems, showing a certain knowledge which was slightly surprising,” Nehru further said. “He discussed—it may interest the House—the languages of India, their relationships, their parentage and their extent, and our Ambassador gave him such replies as he could on the subject.”