Canine heroes of the Eastern Front 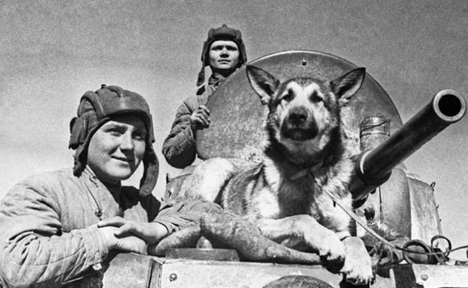 Dogs rescued a total of more than 600,000 people from the battlefield. Source: TASS

During the Victory Day parade in Moscow on June 24, 1945, combined regiments of all fronts and military vehicles were followed onto Red Square by dogs, walking side by side with their handlers in perfect alignment. Used to rescue the wounded, to locate mines and even to destroy enemy tanks, these specially-trained canines played a vital role in the victories won by the Soviet army on the Eastern Front.

Countless lines have been written over the years about the courage displayed by the soldiers of the Red Army during World War II – but very few have been mentioned their canine comrades-in-arms, the specially-trained dogs that accompanied them into battle. About 60,000 dogs of various breeds as well as ordinary mongrels were drafted into the army. Dogs helped people on every front – they searched for mines, pulled the wounded from the rubble or from battle. Sometimes they were even used as suicide bombers – dogs wrapped with explosives would be trained to rush under enemy tanks.

An anecdotal story about the Battle of Moscow in the fall of 1941 tells of a group of enemy tanks attacking the Soviet line that supposedly turned back when they saw dogs rushing at them. Fear was justified – dogs were trained to blow up tanks. During the war, Red Army dogs destroyed more than 300 German tanks – equal to two armored divisions. 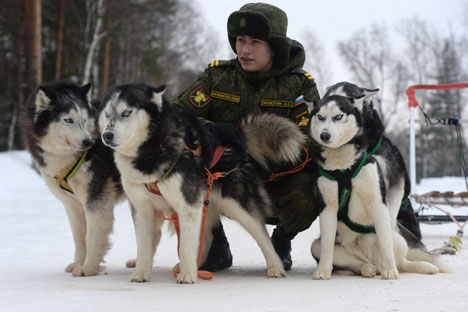 On sleds during the winter or small carts in the summer, dogs brought ammunition to the battlefront, and took the wounded on their way back. Each team of dogs substituted for three to four nurses. Dogs rescued a total of more than 600,000 people from the battlefield. When the nurses could not reach a wounded man because of heavy fire, the dog would crawl up to him on their bellies and show him their side, where the medical bag hung. They waited for him to bind up the wound, and only then went on to the next. If a man was unconscious, the dog licked his face until he came to his senses.

Besides rescuing the wounded, canines were also put to use carrying out other essential tasks such as maintaining communications. During the war, messenger dogs delivered more than 20,000 messages and laid about 5,000 miles (8,000 km) of telephone wires where it was impossible for a soldier to pass.

Meanwhile, dogs also demonstrated an invaluable aptitude for detecting landmines. More than 300 large cities were cleared of mines with the help of dogs. The personal file of a collie called Dick reads: "Conscripted from Leningrad and trained for mine detection work. During the war, detected more than 12,000 mines, took part in demining Stalingrad, Lysychansk, Prague and other cities."

Dick performed his greatest feat in the Leningrad suburb of Pavlovsk, detecting a 2.5-ton clockwork landmine an hour before the explosion. Despite multiple injuries, Dick, repeatedly won at many dog shows after the victory. The veteran dog lived to a ripe old age and was buried with full military honors.

Despite numerous feats by canine soldiers during the war, an Alsatian named Dzhulbars was the only dog to receive a medal for Battle Merit. During the last year of the war, this sapper dog found a total of 7,468 mines and 150 shells, and participated in mine clearance of palaces on the Danube, the castles of Prague and the cathedrals of Vienna.

Dzhulbars' handler was Dina Volkats, the future wife of the country's chief cynologist, Lt Col Alexander Mazover. Before the war, Volkats became a service dog trainer in her native Kharkov (in present-day Ukraine). In 1941, the 18-year-old was sent to the Central Service Dog School to train soldiers. After receiving the rank of second lieutenant, Volkats set to work. Having chosen a dog, Volkats showed it to the head of department. Dzhulbars looked so pathetic that the chief only grunted: "Couldn’t you find a dog worse than that? May I know on what grounds you have chosen it?" "By his eyes," Volkats is said to have replied.

At the end of the war, Dzhulbars was injured and could not participate in the victory parade in Moscow on May 9, 1945. Marshal Konstantin Rokossovsky reported this to Stalin, who ordered the dog to be carried onto Red Square on its coat. The Alsatian was carried in the arms of Alexander Mazover, who was exempted from the need to high-step and salute – he was responsible for the safety of a very valuable soldier of the 14th Assault Field Engineer Brigade.