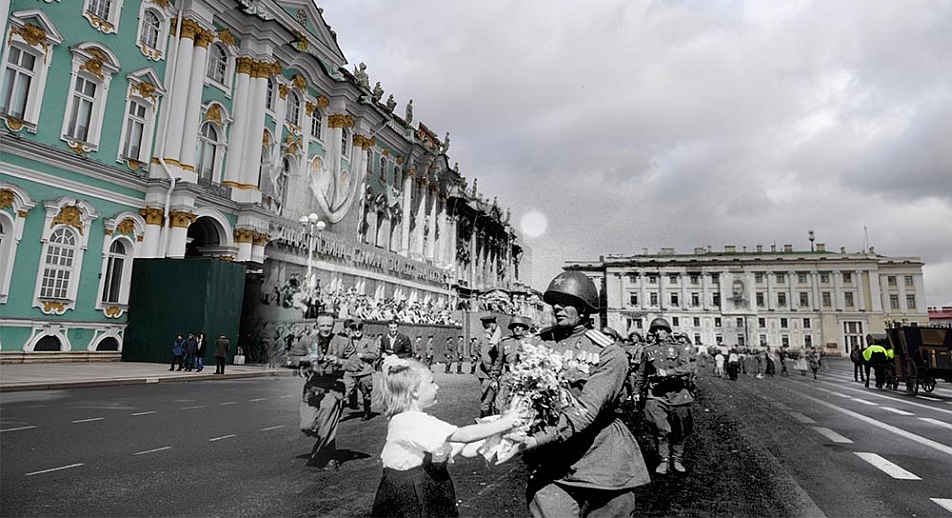 In the hands of marine pilot Sergei Larenkov, a camera turns into a time machine.

For six years, Sergei Larenkov has spent his spare time making photo collages, creating mash-ups of archival wartime photos of Russian and European cities with photographs of the same places today. Elena Bobrova of RBTH spoke with Larenkov about his idea for the project and his plans for the future.

RBTH: How did the project, "The Link of Times," come about?

Sergei Larenkov: My grandmothers survived the Siege of Leningrad, now St. Petersburg, while my grandfathers fought within the ring of the blockade. Much of what I know about the time I heard from them in my childhood.

When I asked my daughters about what they learn about the war in school, I came to a disappointing conclusion: I realized that the connection with that time gets broken with the departure of the old people.

Having thought about how I can fill this gap, I decided to show my daughters what the places they walk every day looked like during the war. In 2009, I took archival photographs, photographed the city from the same points and put photographs of the siege of Leningrad on the modern photos of St. Petersburg. The result amazed me. I was so fascinated with it that I wanted to continue to penetrate into the past with my camera.

RBTH: How do you decide what to photograph? Do you choose the places that you know and look for them in the archives, or do you find archival photos and start looking for this location in reality?

S.L.: If I'm going to visit this or that city, I prepare for this very carefully in advance. First of all, I study in detail the history of what happened there, study the geography of the city.

I select photographs and try to determine with a certain probability where they were shot, when I am still at home. In many cities, where I try to "penetrate into the past," I get help from the local guys who are interested in history, with whom I prepare materials for the expedition in advance.

RBTH: Where do you find the old photos for your collages?

S.L.: I took my first images from open sources on the web. Later, I took a more professional approach and started working with archives. Assistance is provided by the Russian State Archive of Film and Photo Documents in the town of Krasnogorsk near Moscow. Many of the photos were contributed to the project by local historians and museums.

RBTH: What happens if you arrive at a place and find that no traces of the war remain there at all?

S.L.: In this case, I try to find at least an indirect connection – some folds in the terrain or very old trees.

In the Peterhof Park, which has survived the war, I came across some wounded oaks from the Catherine the Great era, which suggested a lot to me. And when I tried to find Stalingrad in the streets of modern Volgograd, I had to resort to the help of aerial photographs from the war era.

RBTH: In 2010, you took photographs of Berlin, Prague and Vienna – what prompted you to do this?

S.L.: Having processed a huge number of photo and video materials, having made a lot of photo reconstructions and the film "Blockade Album," I felt that I had lived through the war myself. In addition, I could not reshoot many images of the blockade for ethical reasons.

I realized that after the horrors of the siege, I also need to see the victory. So I went on an expedition to the Europe of 1945.

RBTH: Where are you currently working, and what are your future plans?

In 2009-2010, I did a project in Moscow. This was followed by Europe – Vienna, Prague, Berlin, Paris, Normandy. Then came Kiev, Odessa, Sevastopol, Kerch and many others. In 2014, I managed to extend the project to include Dresden, Novorossiysk and Murmansk. The entire project, "The Link of Times," includes more than 1,000 works.

In addition to World War II, I have projects on the First World War and the Russo-Finnish War [ed. Winter War]. It's incredibly interesting for me to touch the history, to show the scale of the past wars and their aftermath, to pay tribute to the heroic deeds of our people.

There are still a lot of places that I would like to take photos of: the Caucasus and the Baltic States, Poland, Hungary, Serbia. I would especially like to visit Port Arthur.

RBTH: You have had many exhibitions and published a number of albums. Is photography still only a hobby for you?

S.L.: I am an amateur photographer, but I would not call it a "hobby." This is the other side of my life, which makes it more meaningful.

From Berlin to Moscow: walking the streets that remember World War II