FC Start vs. the Nazis: When football really was a case of life or death 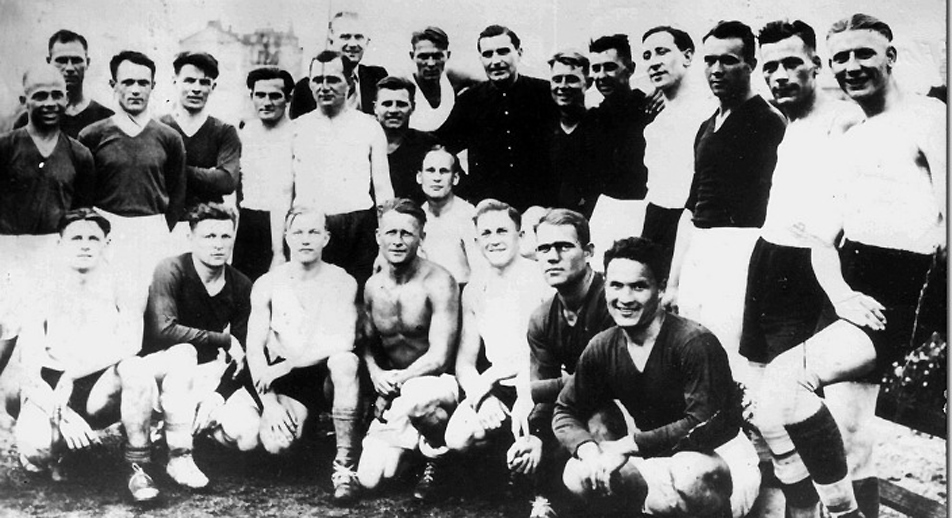 In 1942, Kiev had been occupied by Nazi forces for nearly a year. Then a German commander decided he would like to see German and Soviet players face off on a soccer field. This placed the former players of F.C. Dynamo Kiev in a quandary: Should they try their hardest to defeat a team comprised of the reviled occupiers at the risk of losing their lives, or should they intentionally throw the match, at the risk of losing their honor?

On September 19, 1941, the city of Kiev fell to the Nazis. After the occupation began, many of the football players from Kiev's popular Dynamo club tried to fight in the resistance for a time, but were soon cut off from the partisans and the front line. Rather than leave the city, they decided to stay together and most took jobs at the Kiev-based Bread Factory Number 1.

Then, in the summer of 1942, the players heard that the Germans wanted to stage a series of "friendly matches" – they even proposed that the dinamovtsy (former Dynamo players) practice at the city’s Zenith stadium. The military superintendent of the city, Major General Eberhardt, was said to be the man behind the idea. He apparently saw in the proposed match a chance to further humiliate enslaved Kiev in front of thousands of observers. What is more, the occupiers might have a little fun at the expense of their weakened rivals.

The incredulousdebated amongst themselves. How were they to find enough energy to play on meager war rations? Would they not be sullying themselves by playing the Nazi invaders? But Dynamo's key players argued for the matches, saying they would not just play, but would win. The people would come and see the fascists beaten at football. It would be a breath of fresh air for the city’s residents.

So the playersaccepted the challenge and named their team Start. On July 12, 1942, posters were hung all over Kiev: "football Match. German Armed Forces vs. Start Team, Kiev."

Start did not train much: They just kicked the ball around a bit near the bread factory, preserving their precious energy. Yet forward Ivan Kuzmenko worked hard on honing his free kick – 30 yards from the goal, testing goalkeeper Trusevich. Kuzmenko suffered from some joint problems and knew he could not run much, but wanted to make a contribution.

A few days prior to the first match, Mikhail Sviridovsky, the most respected player on the team, dug up some uniforms for his comrades: white shorts, red t-shirts and long red socks. Everyone knew that the color of the jerseys and socks was in defiance of the Germans. But the confident Nazis turned out not to mind the red: beating the "reds" at football was such a tantalizing prospect.

The match did not exactly go to plan for the Nazis – Start paid no attention to German threats and beat them 4-1. On July 17, the Germans pulled together a somewhat stronger team. But the Dinamovtsy trounced them too: 6-0.

The next match saw the Hungarian club MSG Wal crushed 5-1 and then again 3-2 in a rematch. Kievans started to quietly cheer. The players began to be recognized on the streets once again, to be met with smiles and thanks, and more and more people showed up at the games.

In the fifth match, the Germans decided to teach the Russians a lesson. They assembled a strong team from the Flakelf – German air defense units, which included several professionals from different German football clubs (some of whom even continued their sports careers after the war). These were a different class of players from the previous Nazi teams. Well-fed and muscular, they played a mean brand of football – yet this did not prevent them from following their predecessors to an ignominious defeat, losing 5-1 to Start on August 6. During the match, the dinamovtsy could hear the fans shouting uDavai, Krasniye!"("Come on you Reds!") The shouts were timid, but they were shouts nonetheless.

The management of the bakery where most of the players worked had promised to get them more bread to help them build up energy for the games, but now warned them that they were walking a tightrope. "They will shoot you!” warned the bakery staff, who supposedly claimed that the Nazi fans were already calling for the Start players to be hung from the crossbar of the goal.

The ‘Match of Death’

The match that was to decide the fate of the Kiev team was a so-called “revenge match” against Flakelf, scheduled for August 9. The players from Start knew that things could not continue as they had much longer. The Germans would not let them keep winning in front of thousands of fans. So it was no surprise when an officer in a Gestapo uniform reportedly paid a visit to their locker room before the match and issued an explicit order in clear Russian: “When the team goes out onto the field, it should salute the opposing team with the traditional ‘Heil Hitler!’"

And there was one more thing, the Gestapo officer said. They were not to win the match.

The Dynamo players were silent. The Gestapo officer is said to have showed off his knowledge of Russian by saying "molchaniye – znak soglasiya."("Silence is a sign of assent.") Indeed, the emaciated players did not utter a word before the game. But, after lining up in the center of the field, on a signal from captain Sviridovsky, they defiantly yelled: "Fizkult privet!"a common sports salute.

Determined to avenge their defeat in the first game, Flakelf took a hard physical approach to the rematch. "They were hitting us so hard that we could hear our bones creaking," forward Makar Goncharenko later recalled. "The officials on the field turned a blind eye to it and even smirked at such roughness."

Meanwhile, the officials – all German – were not doing their job. The Nazis were playing rough, deliberately targeting key players, but Start were not in a position to answer rough play with more of the same. Furthermore, the referee was doing all he could not to let Start get too close to the German goal, whistling for offside on the slightest provocation. So it became senseless to make passes too close to the penalty box. Start had to resort to shooting at the goal from afar or outplaying the German defenders one-on-one.

Nonetheless, by half-time, Start leading 3-1, having overturned an early strike for the Germans with a long-range free-kick from Kuzmenko and a brace by Goncharenko – one a header from a Kuzmenko cross and the other an individual goal created by dribbling through the German defense.

The second half was marked by fierce combativeness, with neither side giving quarter. Start were missing the talents of Kuzmenko, whose injured leg had forced him to come off the pitch at the break after being cynically fouled by the Germans throughout the first half. Flakelf scored twice to level the match, but Start were undeterred, and two further goals for the Kiev side finally ended German resistance at 5-3.

On the morning of August 18, the whole Start team was arrested.

The price of victory

During 32 long days of interrogations, accusations, humiliations and threats in the basement of Gestapo headquarters, the Gestapo officers accused the players of being connected with the local underground and of beating the Germans on orders from the partisans. The interpreter in the interrogations turned out to be a traitor; before the war he had worked as a janitor at the stadium, now he slandered the players and sullied their reputations.

The prisoners were taken from the Gestapo dungeon one morning at dawn to several waiting cars. One of two bleak futures awaited those whose "crime" was having outplayed their opponents: a concentration camp or immediate execution.

Of the players sent to Syrets concentration camp (later known as Babi Yar), four were later shot there, including Trusevich and Kuzmenko. Makar Goncharenko was among the survivors, along with Sviridovsky. In fact, Sviridovsky and Goncharenko executed a daring escape from the camp.

Goncharenko went on to became a respected coach in Ukraine, training such famous players and coaches as Valery Lobanovsky and Oleg Bazilevich.

Interestingly, Lobanovsky, who died in 2002 from a stroke, resurrected the fame of Dynamo Kiev in the 1970s and into the 1990s. In 1975 he led his team to win the European Cup Winners’ Cup, then the European Super Cup, where he defeated the German team Bayern Munich in two matches – a fitting epilogue to this astonishing story.

This article has been aabridgedfrom the original in Rossiyskaya Gazeta.