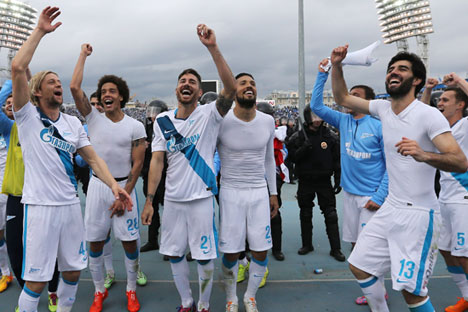 Zenit, the new Russian soccer league champions, used to spend a lot on star players and coaches, but the hefty investments have not brought desired results in the European League Cups. Analysts blame poor staff policies for not getting results.

St. Petersburg’s ‘Zenit’ FC have become Champions of the Russian soccer League in the 2014-2015 season. The club from the city on the Neva won the title with two matches in hand before the tournament final. The outcome has caused barely any surprise because St. Petersburg took the lead from the beginning of the season, winning decisive matches against main competitors; CSKA, ‘Krasnodar’ and ‘Dynamo’.

Today, ‘Zenit’ is dominating the Russian League like ‘Bayern Munich’ does in Germany, or ‘Paris St Germain’ does in France.

Shopping on a grand scale

The era of excellence took off in 2006, from the time “Gazprom” took over as the club’s owners. In early 2007, the transfer market exploded, when ‘Zenit’ bought the captain of the Ukrainian team Anatoly Tymoshchuk from the Donetsk ‘Shakhtar’ for US$ 20 million, then considered a record sum for Russia. In August 2008, ‘Zenith’ broke its own record by paying Moscow's ‘Dynamo’ club 30 million euros for the Portuguese player Miguel Danny. But the double transfer of the Brazilian Hulk from ‘Porto’ and the Belgian Axel Witsel from ‘Benfica’ in the summer of 2012 were the most extravagant acquisitions. According to official information, ‘Zenit’ paid 40 million euros for each, while there were reports that Hulk cost the club a massive 60 million euros.

2014: A year to forget for Russian football

Why did the club go for such huge expenses? Though reigning in Russia, ‘Zenit’ could not attain success in European competitions. However, ‘star’ buys did not bring instant results. In fact, after bringing Witsel and Hulk, ‘Zenit’ finished second in the 2012 championship. Neither did the star players manage to bring the club to the playoffs of the Champions League.

A key reason for the club’s failure was the conflict that arose with a number of Russian players resenting the fact that newcomers were earning more. The club's midfielder Igor Denisov protested and eventually left the team. Despite his departure, the situation did not improve in the season 2013-14. The then Italian coach Luciano Spalletti lost control of the team and, after ‘Zenit’ lost the title to CSKA again, was dismissed.

He was replaced by the Portuguese coach André Villas-Boas, who made his name with ‘Porto’ (the victors in the Europa League) and was also known for his work in England with ‘Chelsea’ and ‘Tottenham Hotspurs’.

In the summer of 2014, ‘Zenit’ bought two more high profile players, Argentinian defender Ezequiel Garay, who came from ‘Benfica’ to join the St. Petersburg club for 6 million euros, and the Spaniard, Javi Garcia, from ‘Manchester City’ for 15 million euros.

‘Zenit’ has finally managed to regain its Russian championship title, after a two year gap, with its import of a galaxy of high-profile players.

Since the UEFA Cup and European Super Cup titles in 2008, which the team won under the then Dutch coach Dick Advocaat, fans have been waiting for new achievements in Europe. But this season, the St. Petersburg club was unable to get into the playoffs of the Champions League passing no further than the Europa League quarter-finals. So far, it appears the large investments have paid off only at home.

The fall of the ruble threatens Russian football

Those interviewed by RIR are split over the reasons for the club’s slow progress. Alexey Strepetov, former player and coach of ‘Zenit,’ believes that the team is short of strong players.

“‘Zenit’ has 5-6 top players, but in order to successfully play in the Champions League, a few more players are needed. Another thing is that ‘Zenit’ is limited by the rules of financial fair play, required by UEFA, and is required to work under the limit on acquiring foreign players effective in Russia. So now, no expensive purchases are made. The goalkeeper Yuriy Lodygin, who was found in Greece, and acquired for only 700 thousand euros, is an example of how it has become necessary to look for promising and low-cost players,” Strepetov said.

Konstantin Sarsaniya, former sports director of ‘Zenit’, sees mediocre coaching as the cause of failure.

“I do not understand what Villas-Boas wants from the players. Everything is based on the individual qualities of the players, and I can say that ‘Zenit’ is playing below its potential,” Sarsaniya said in an interview to RIR.