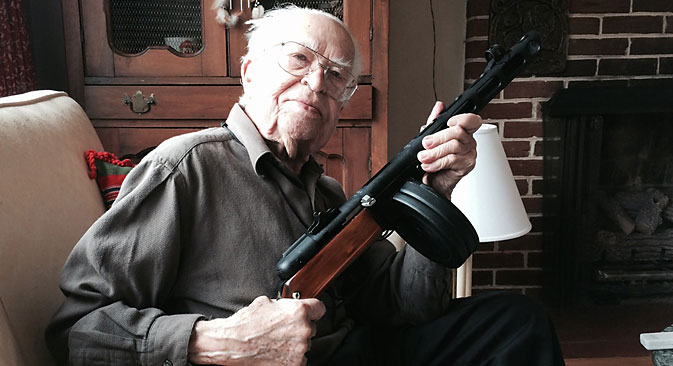 On April 25, 1945 Soviet and American troops cut through the Wehr­macht divisions and met in the middle of Germany near the town of Torgau, 85 miles from Berlin, on the Elbe River. American veteran Igor Nikolaevich Belousovich was a participant of this historical meeting.

American veteran Igor Nikolaevich Belousovich, 93, was born in Shanghai and grew up in San Francisco. He was a direct participant in the Elbe meeting that took place April 25, 1945, and this year he came to Moscow to watch the May 9 Victory Day parade. At his home in Falls Church, Virginia, just outside Washington D.C., Belousovich spoke about how the soldiers from the Allied armies met, and what the meeting meant for them.

It is not difficult to detect Russian lineage in your name. How did it happen that you fought in the American army?

My father was a “white” immigrant. After the 1917 Revolution, he managed to get to Khabarovsk from central Russia, where he met my future mother and married her. Then they crossed the border to China.

I was born in Shanghai, and seven years later, my family moved to San Francisco. Back then, 1,000 Russians lived there. They all lived together. At home everyone spoke Russian, all our friends were Russian.

With time, I obviously became American, but I still have this so-called double personality. After growing up I started at the University of California, Berkeley, but did not finish my studies due to the war.

How did you wind up at the front?

I think it was in 1943. Back then, there were various educational programs in the Army for students, and taking my background into consideration, I was sent to study Russian at Syracuse University. But the director of the Slavic department was convinced that I knew Russian quite well and therefore switched me to a German course.

The army in Europe needed reinforcements, so my studies were interrupted. We were distributed among the military units, and I found myself in the 69th infantry division as a regular lance corporal. At the end of 1944 the division was sent to England and then to the front near the Belgian-German border. My last military campaign consisted of capturing Leipzig.

How did you become part of the group that established contact with the Soviet units?

We were fighting in the eastern part of Germany and our regiment stopped near the Mulde River, a tributary of the Elbe. Parts of the Red Army were somewhere on the other shore of the Elbe. For several days, we did not move anywhere – everyone was very cautious. Just think: If we had not recognized each other and started a skirmish, this would have been very bad.

Finally, when three patrols were formed to establish contact, one of the regiment commanders remembered that someone among the soldiers spoke Russian. I was called and placed in one of the patrol units.

U.S. troops on morning patrol shortly before linking up with the Red Army. Source: Igor Belousovich

Early on the morning of April 25, we crossed the Mulde Bridge in our jeeps. In about two or three hours, our three groups managed to established contact with the Russian army. We would later say that any one of the soldiers in our three patrol units could consider himself a participant of the first meeting with the Russians.

When and where did you personally come into contact with the Soviet soldiers?

At a distance we spotted a cavalry column, which, after seeing us, galloped in our direction. I had a small photo camera in my pocket, the only one in all the patrol units. I took some photos of the cavalrymen, and then of the meeting itself.

Belousovich: 'At a distance we spotted a cavalry column, which, after seeing us, galloped in our direction.' Source: Igor Belousovich

A commander of one of the Soviet detachments told us which roads could be taken to the Elbe and to the town of Torgau. [Editor’s note: Torgau is considered the offical meeting location.] I was the only one to speak both languages, so I translated.

Then the cavalrymen went to Dresden and we arrived at the Elbe. We were met by a group of Soviet officers, including General Vladimir Rusakov - commander of the 58th guards division.

The meeting on the Elbe is sometimes considered the final defeat of Nazi Germany. What feelings did you personally have at that moment?

The only thing I regret is that at that moment I only had one roll of film. I knew that it was a historic occasion.

By the way, Russians have always respected this date. Here in Washington, in the Arlington Cemetery, there is a memorial that honors the meeting at the Elbe, and every year the Russian Embassy invites veterans to a wreath-laying ceremony and organizes a reception for them.

How did the American soldiers perceive the meeting?

Among the Americans, there were few who had an idea of the Soviet Union. But of course they knew about the bloody battles on the Eastern Front. Back then there was no such thing as the Cold War.

Even though we spoke different languages, the meeting was very friendly. Everyone patted each other on the back, and smiled. There were no serious talks or negotiations. I translated a lot. We were given a lot to eat and drink and then we slept in our hosts’ camp. In the morning I had a terrible headache.

Did the ordinary soldiers exchange anything as tokens?

Yes, everyone wanted to take some kind of souvenir. We were interested in the stars with the hammer and sickle on the Russians’ caps. But the most important souvenirs for me were the memories and the photos. The film was later developed at our command post and much to my surprise, the photos and the negatives were returned to me.

In two weeks the war in Europe was over. Our unit organized the movements of migrants who were heading west. In two or three months we were transferred to the rear, and then we returned home, and that is how it all ended.