Symbols of a vanished era: the items that epitomized daily life in the USSR 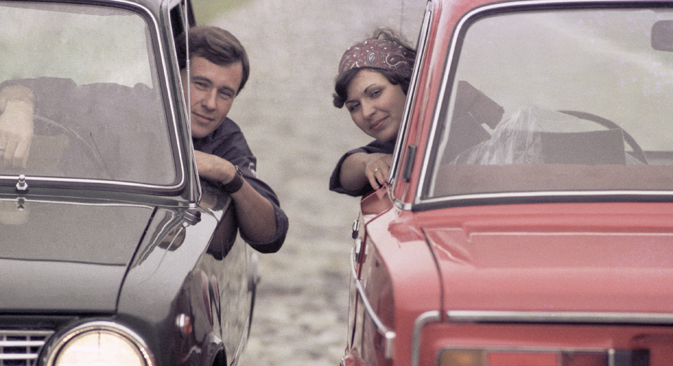 A car was something you were supposed to buy only once – and for some people, it really did last a lifetime. Source: Yury Abramochkin / RIA Novosti

Russian writer Alexander Kabakov, author of the dystopian work “No Return” and the diary novel “A Runaway,” presents his list of Soviet day-to-day life essentials, providing a glimpse of the everyday scenes and items that featured in the daily routine of the communist era – largely forgotten in modern-day Russia.

“That was a kind of a beanie for men made of elastic thread and designed to keep short hair in perfect form. It was usually worn right after a shower, while the hair was still damp. Generally, men avoided parting hair in the middle; side-parted hairstyles – or ‘English’ hair, as they used to say – were more popular, but most people wore comb-backs. Still, a hairnet was a tell-tale sign of a dandy. In every communal apartment there was an old bachelor – a communal playboy, if you will. Now, that man could often be seen wearing a hairnet in the morning.”

Cigarette cases (but no cigarettes)

“As popular as they were diverse, cigarette cases ranged from simple self-made tin containers, brought home by soldiers and adorned with embossed images (the most popular motif was a German shepherd’s head) to genuine antiques obtained in consignment stores by the rich; these were usually pre-revolution made, gem-encrusted silver cases decorated with various pictures and inscriptions, some of which were rather amusing.

“It was also possible to buy a golden cigarette case, but this was a very expensive thing – so expensive, in fact, that writers Ilya Ilf and Yevgeny Petrov owed one to Valentin Katayev for suggesting the idea for their famous novel The Twelve Chairs. Being honest people, they bought him what he wanted. Being thrifty – as most people hailing from Southern Russia are – they actually bought a ladies’ cigarette case, which was smaller, narrower and longer than the usual kind.

Those blessed with good taste possessed leather cigarette cases, which more often than not were war trophies. Later, as classic cigarettes became more and more popular [Up until the 1960s, Russian smokers preferred papirosy – cigarettes of specific design without filters; cigarette cases were mostly used to carry these – RBTH], cigarette cases gradually disappeared. And nowadays smoking has almost been made a felony in the country.” 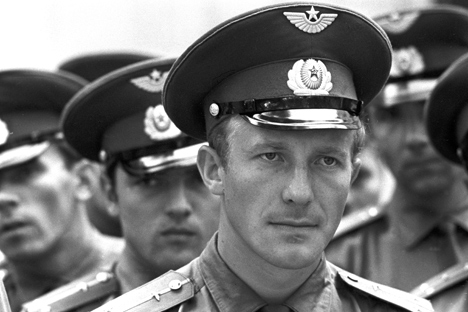 “My father was an officer in the Red Army, so many of my memories are related to the specific lifestyle of our garrison community. Now, a celluloid collar was a very peculiar contraption. It was a thin strip of plastic sewed under the collar of an officer’s coat. One noteworthy thing about them is that they were readily available in Voentorg military supply shops, but high-ranking officers actually forbade their subordinates to wear them. The reason was that the plastic frequently chafed the neck. On the plus side, stitching such a collar to one’s uniform was an easy and not at all time-consuming task.”

“These were heavy felt boots, usually a light shade of cream in color. The stitches, positioned at the rear, at the front and on each side of a boot, were covered with russet leather strips; the vamps were also covered with leather, and the soles were typical for a usual boot. Basically, they were the same as valenki [another kind of traditional Russian felt boot – RBTH], but thinner and made by stitching together several pieces of felt, rather than felting the whole boot. Burki were worn by the so-called supply agents who prowled day and night across the vast expanses of our socialist motherland; their task was to find an enterprise producing the goods needed by the company that sent them. They were essentially industry’s ‘matchmakers,’ making up for the inferiority of the planned economy.” 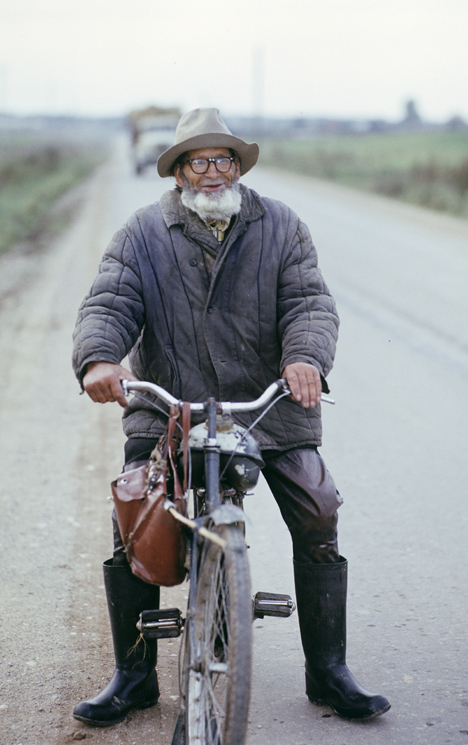 “Here I’d like to sing the praises of the Russian telogreika [a wool-padded jacket, or bodywarmer] and at the same time, to lament the historical injustice inflicted on it. This garment is akin to American jeans in that it is just as hard-wearing, versatile and comfortable. By the way, jeans and a telogreika would make a very nice outfit together. I actually know one person who wore it and pulled it off, and that was Yury Rost [a Russian photographer, journalist and author]. He wore a pair of high-quality American jeans – which were held up by a piece of rope for a belt – combined with a telogreika. Alas, this ensemble never became popular. A shame, really: jeans conquered the whole world, but the telogreika remained essentially confined to Russian gulags.

“The bitter fate of this item is reminiscent of the just-as-bitter fate of its country of origin. You know, it used to be a part of the military uniform in the Red Army. It was also worn by prisoners – but, then again, their telogreikas were in such poor condition that they were virtually indistinguishable from any other overcoat. In the end, the origins of the telogreika played a malicious trick on it.”

“Prior to the 1950s, double-decker trolleybuses could be seen on the streets of central Moscow. These were bizarre vehicles with very short trolley poles. I don’t think it was completely safe to ride one, though – such a vehicle simply could not be stable. I remember well one of those trolleys which used to run from the city center down Gorky Street to the Dynamo stadium and back. On the days when there was a game at the stadium, the trolleys were absolutely packed with football fans, some of them even had to hang outside.” 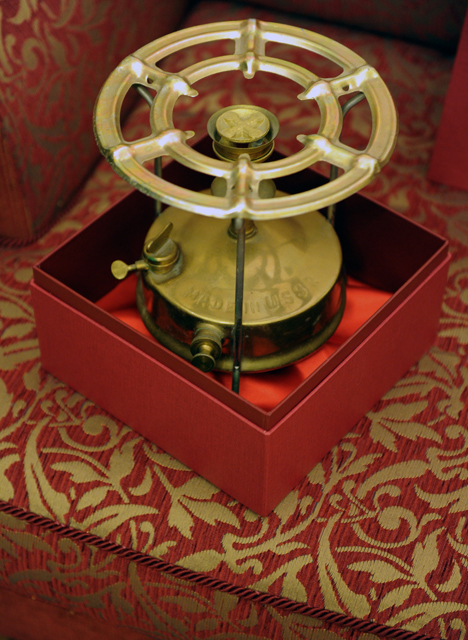 “Natural gas was not available in many city households, so people used small portable kerosene stoves – or Primus stoves – for cooking. They all had mostly the same design, give or take a couple of features. Later, a new device called kerogaz appeared; this was the same old portable kerosene stove, but it had a higher fuel consumption efficiency. All those stoves were usually lined up in the kitchens of communal apartments, and when people came home from work in the evening, you could hear this steady humming. The humming of a Primus stoves was one of the distinctive features of Soviet home life.”

“An inherent piece of the typical design for the room that was used as the lounge – if that word can be used in the context of a communal apartment. Despite the cramped living conditions, there was often a ficus houseplant in a prominent location, frequently accompanied by a small Chinese apple tree (or kitayka – ‘Chinese’ – for short) which bore fruit.”

“People living in the ‘Soviet medieval period’ (lasting from 1930s to the early 1950s) had a very special relationship with cars. Car owners were called chastniki or ‘owner drivers.’ A car was something you were supposed to buy only once – and for some people, it really did last a lifetime. Cars were assembled pretty neatly, and were resistant to corrosion despite the paint being awful – the metal frames were just that thick.

“Generally speaking, Soviet cars demonstrated that Soviet economy was capable of producing decent and – to use a modern term – commercially viable products. There was just one condition for that: The quality control department had to be managed by Comrade Fear. The history of Soviet automobiles – from the GAZ-M20 Pobeda, an automobile that was eternal and elegant in its own way, all the way to the crumbling Moskvich and Volga cars, of the end of the decadent era in the USSR – is one big piece of evidence for that.

“During the twilight years of the socialist era, Soviet citizens were allowed to form cooperatives. As soon as that happened, a small shed appeared right near the fence of the Moscow AZLK factory, the maker of Moskvich cars. The shed housed a cooperative which upgraded the purchased cars right there on the spot. In other words, the workers from AZLK simply went there after work to disassemble and then reassemble the cars they’d just produced. Granted, after that, you could actually drive those cars for some time.”

“The stores never displayed any actual food products in their windows – there were either plastic replicas or cardboard cutouts. And that makes sense: For instance, a store called Meat had no need to attract customers. So the display windows were full of fake sausages made of papier-mâché. The most recognizable replica was that of tongue sausage, but it looks slightly differently now – back then the slices of fake tongue sausage were depicted with a chessboard pattern on them, with black squares representing pieces of meat and white ones standing for fat.

“The famous Yeliseyev store in central Moscow did display some genuine food. For example, there were huge porcelain troughs filled with caviar of several kinds – several sorts of red, black, fresh-grained, beluga, osetra, pressed caviar… Nevertheless, the display did not look too appetizing: Since caviar was still pretty expensive and did not sell tremendously well, it just stayed there and dried out.

“Number 1 on Tverskaya-Yamskaya Street used to house a toy store until the 1960s. Its display window had a multi-story doll house in it, complete with little dolls peeking out of the windows. It was like a huge doll world out there. I recall it was impossible for anyone to pull me away from that window. Of course, buying the house – or even a small part of it – was equally impossible. Anyway, the first thing a Soviet citizen learnt when he entered a store was that the goods he was there for were not available. Afterwards, he had to decide how to deal with it.” 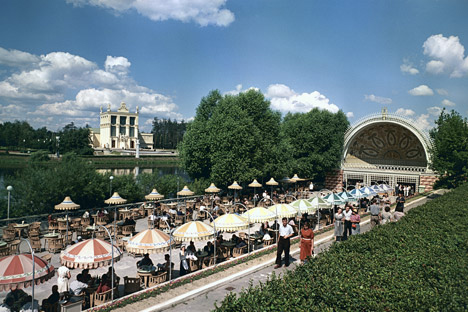 “Self-service soda fountains – some with syrup dispensers to add some flavor, some without – were all equipped with a special device to wash glasses. Certainly, a glass was supposed to be there, but it never was – these were either stolen by winos, or shattered and not replaced in time. To make a fountain work, you had to bang it on the side. Soda was also sold by street vendors with carts.

“Sometimes you could meet an ice-cream man with a special cart filled with dry ice. Shopping carts with pirozhki [pies with various fillings] were much less common, but you could still find those. One was always on the corner of Neglinka and Pushechnaya Street, opposite the Central Department Store, or TsUM. The pirozhki sold there came in two kinds: with ‘meat’, which was in fact various finely ground meat scraps, or with jam. Not the healthiest kind of food, sure, but we still enjoyed them.” 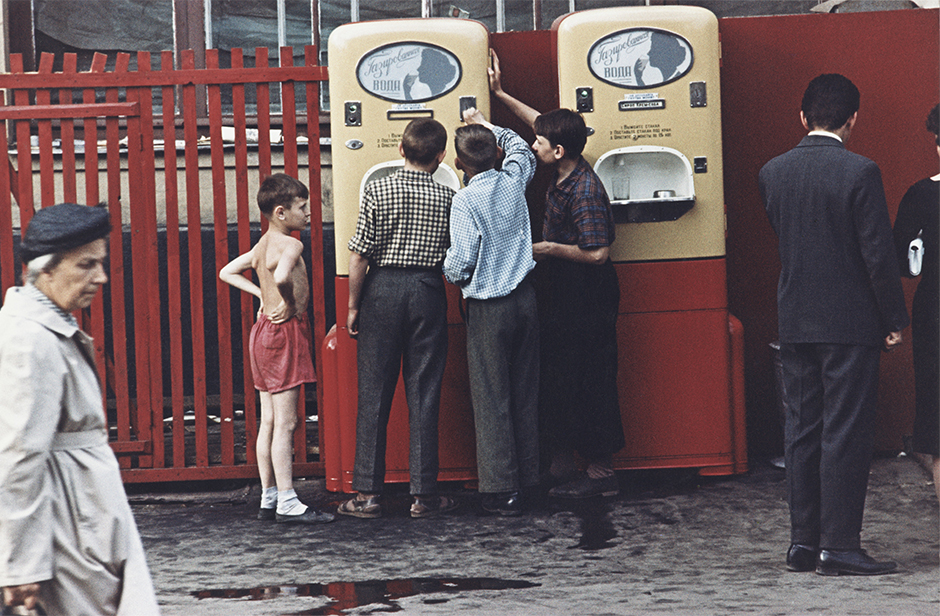