The saga of Sergei Polonsky 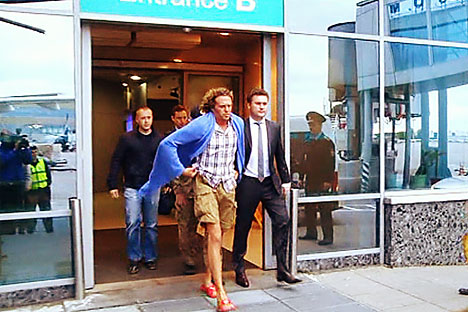 Polonsky is likely to be convicted, but is not clear what his punishment will be. Source: RIA Novosti

Sergei Polonsky, once called one of Russia’s most eccentric entrepreneurs and counted among Russia’s wealthiest citizens, was arrested on May 15 in Cambodia. After being deported to Russia, he is being held in a Moscow detention centre and is due to stand trial for the theft of 5.7 billion rubles from investors in elite housing projects he floated.

Sergei Polonsky has been called one of Russia’s most eccentric entrepreneurs. This characterization by Forbes is probably the most accurate evaluation of the man.

Stroimontazh was renamed Mirax Group in 2000 and, under Polonsky’s direction, entered the Moscow real-estate market. By 2008, the company was working in real-estate markets of Russia, Ukraine, Montenegro, USA, Switzerland and UK. His portfolio in November 2008 included projects with a total area of 12 million m², with a gross income estimated to be $1.65 billion, of which $616.4 million was a clear profit.

Polonsky’s most notable project was the Federation Tower, a skyscraper designed by famous Russian architect Sergei Choban. Its foundation was the largest block of concrete in the world (14,000 square metres), recorded by the Guinness Book of Records

The company’s portfolio included large-scale residential projects, which were cities inside a city, such as Golden Keys II, where high-rise buildings were placed side by side along cottage settlements.

During the 2008 global financial crisis, he first recognized market stagnation and froze the project. In 2012, co-investors accused him of fraud in relation to the Kutuzov Mile residential complex. The investigation revealed that Mirax had raised 5.7 billion rubles and invested 2.5 billion in the construction.

As Konstantin Kovalev, Blackwood managing partner, explained, Polonsky’s business was no construction pyramid scheme. “This was a large company, a leader in business class real-estate construction. The crisis affected its development, and the company had become too big and had a management crisis. It was specifically this that Polonsky was unable to resolve,” Kovalev said.

“Russian companies develop very quickly, here there is no need to develop a reputation over decades. People trusted Mirax and one cannot say that he deceived investors. Simply, his predictions for the rise in the cost of real estate ended up wrong, which happens often enough on the market. Many companies found themselves in a similar situation after 2008.”

“For the Russian public, Polonsky was similar to American businessman Donald Trump,” said Artem Tsogoev, UNIKVART managing partner. “He built high profile projects, personified everything that was successful and positive, that was on an actively developing real-estate market”, he said.

Eccentricities on a large scale

He named one of his four children Mirax, in honour of his company.

He said he had been nailed into a coffin and had spent a night at a cemetery.

He thrice wanted to go into space and even underwent pre-flight training, but he was rejected officially because of his “inappropriate” height and weight: 197 cms and 100 kg.

His company employees were required to tell jokes at planning meetings.

He made his top-managers participate in extreme sports. There was one time when 37 employees went on a 300 kms trek in the north of the country under orders from their boss.

On Builders’ Day, he ordered his managers to abseil from the top of a sky-scraper.

In a media interview, he admitted that his mentor was an esoteric who had once taken him to Karelia and left him completely alone in the forest for four days.

The strangest was Polonsky’s behaviour at a reception during the inauguration of the MIPIM 2008 real-estate exhibition at Cannes. The realtor refused to talk to anyone who was not a billionaire.

Polonsky also revelled in his fight with banker Alexander Lebedev.

And, eating his own tie, he streamed it live on the internet!

Polonsky was involved in a scandal in Cambodia, where he was going to start work on a new construction project. Travelling by boat, he locked a crew of local sailors in his cabin, and then threw them into the sea. He served three months in jail for it.

Kovalev explained the behaviour by saying that he didn’t know any company directors who did not have their own peculiarities, therefore Polonsky’s antics were not all surprising, and he accepted them as company PR.

The 42 year-old Polonsky was convicted by Cambodian authorities for violating immigration laws and promptly deported to Russia. The charges of which he stands accused carry a sentence of up to 10 years in prison.

Tsogoev is certain that Polonsky is likely to be convicted, but is not clear what his punishment will be.

"It will not be easy to prove it was fraud. The fact is that Polonsky was trying to complete the project, but his partners did not let him continue. But since he is in jail, then when it goes to court, he is likely to be convicted. Whether it will be a conditional term or real time will be decided in the proceedings," he said.