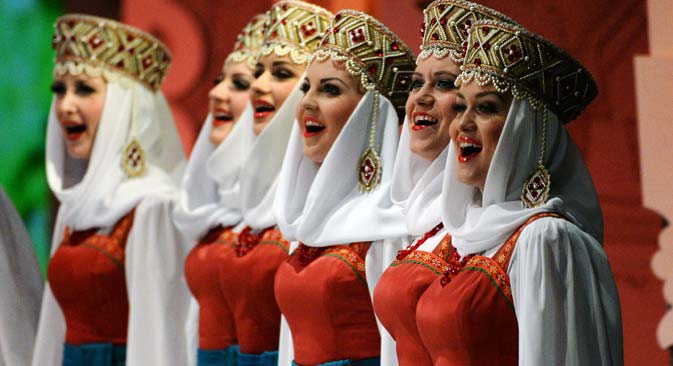 Russia is to commemorate the 25th anniversary of the day of the adoption of the Declaration of State Sovereignty of the Russian Federation with a series of concerts in New York, Paris, Jerusalem, Rio de Janeiro, and Beijing on June 12.

Five acclaimed orchestras, choirs, and chamber ensembles from Russia will hold concerts on this day as part of the “Day of Russia in the World – Russian Day” international cultural project, said the organizers at a press conference in Moscow.

The concerts by the famous collectives will take place sequentially on June 12 at different points around the world. The celebrations will kick off in Beijing, where the St. Petersburg State Capella Choir will perform at the National Center for the Performing Arts under the direction of Alexander Chernushenko.

As the writer and director of the project Yury Laptev noted, “the Chinese side requested that the choir performed, which is especially pleasing: It is known and loved here.”

The Sveshnikov choir’s artistic director Yevgeny Volkov said that “in the program there are many songs from the first wave of the Russian emigration, those that were heard in Paris in the early 20th century when Feodor Chaliapin, Alexander Vertinsky, and Russian choirs performed there.”

Also to be performed is the premier of the famous song “Le Chant des Partisans” as arranged by the composer Aram Khachaturian.

Upon the completion of the Paris concert, the “Soloists of St. Petersburg” Chamber Ensemble will begin its performance of works by Antonio Vivaldi, Mozart’s Piano Concerto No. 17, Tchaikovsky’s Serenade for Strings, and a Grieg suite at the Municipal Theater of Rio de Janeiro (Teatro Municipal do Rio de Janeiro).

The Day of Russia in the World will draw to a close in New York on the stage of Carnegie Hall, where the St. Petersburg Philharmonic Orchestra will perform Tchaikovsky’s Symphony No. 4 and Dmitri Shostakovich’s Symphony No. 5.

According to the organizers, in the years to come, the acts will encompass other world capitals, as well as other artistic spheres. Next year, there are plans to host the Day of Russia in the World in London, Vienna, Berlin, and San Paulo, and theatrical and ballet shows and exhibitions will be included in the program.

Deputy Artistic Director of the St. Petersburg Philharmonic Orchestra Nikolai Alexeyev will conduct the concert at Carnegie Hall. In comments to RBTH he said that he is not afraid of potential demonstrations over the Ukraine conflict on Russia Day in New York:

“I do want to talk about Russian-American relations, but I would like to talk about the attitude of Russian musicians and American audiences. When Carnegie Hall was opened in 1891, Pyotr Ilyich Tchaikovsky conducted one of the first concerts held there. Since then Russian soloists, conductors have regularly performed there. The St. Petersburg Philharmonic Orchestra is no exception and we are always looking forward to new meetings with the wonderful American audience.”

Read more: How Russian culture became essential for the world