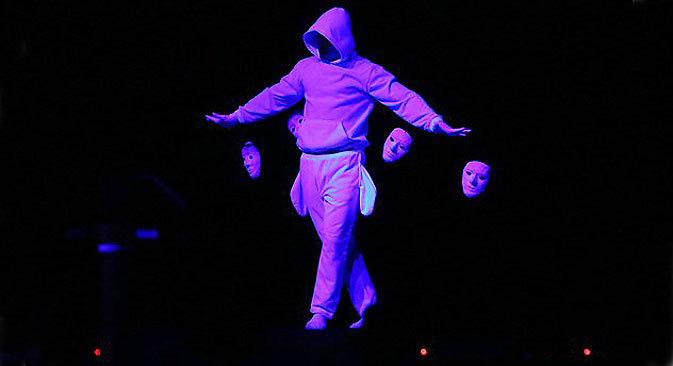 Siberian shadow dancers UDI who got millions of views on YouTube, finished tenth in the finals of Britain’s Got Talent, propelling them to international fame.

Siberian dance troupe UDI was founded in 1998 in the city of Tomsk. The name comes from initials of the first names of the three founders: Yuri (or Uri) Bakin, Denis Vishnyak and Igor Andrikevich. They were later joined by Sergei Sharov, Vladimir Lee, Dmitry Titov, Vladimir Sarafan, Andrey Bakhtin and Nikolay Mitkin.

“It happened a long time ago - they were aged around 12," recalls Igor's mother, Svetlana Andrikevich. "Denis first met Yuri and later Igor, and they have stayed together for more than twenty years. They used to go to the same sports center together and taught themselves to dance. Before each session they watched films about acrobatics, marshal arts and break dancing, learning the moves to practice later."

At first she did not like the direction the boys were taking: “As a mother, I was worried about my child’s well-being, especially since they actually learned dancing by themselves, without a coach. I was scared, especially about all those jumps. The pressure was so intense Igor even fell ill with fever a couple of times. Later, after seeing the spark in the children’s eyes, I accepted it.”

Nowadays, Svetlana is not just an ordinary mother — she manages the dance school UDI runs, which teaches acrobatics and break dancing to 650 people aged from five to thirty. The groups are diverse: there are disabled people, orphans and teenagers from low-income families.

Svetlana says she has always believed in the group, knowing that "the guys were sincerely and passionately into dancing - and that always gets rewarded." Despite this, on the night of the final of Britain’s Got Talent, she was extremely anxious. And she was not alone.

"The dance school students, their parents - we were all agitated, we all wanted UDI to succeed. The next day at school I asked if anyone was watching the final, and almost everyone raised their hands. It is very nice of them to support the troupe like this. It's a pity we couldn't vote though," says Svetlana.

A year ago, after having won the hearts of Russian and Ukrainian spectators in local talent shows, UDI decided to make a break for the UK and signed up for Britain's Got Talent.

"We're quite popular in Russia, but in Europe, no one knows us. We signed up online for the show, attaching a video of our performance. We did not have high hopes - after all, no Russian competitor had ever managed to enter before. So we sent it and forgot about it, but soon enough we got a reply - they invited us to an audition in London," says troupe lead dancer Igor Andrikevich.

The atmosphere behind the scenes was tense on the big night, the dancers say. While the British artists had professional stylists, hairdressers and tailors helping them before going onstage, the Russians had only themselves to rely on to create their image.

“All the participants quickly became friends and were chatting away, but we were outsiders as we’d spent all our time dancing and had not learnt English properly. It was at that point we understand that we should have," says Denis Vishnyak.

According to Denis, UDI were supposed to be the eighth act to perform which could have boosted their chances, since the closer an act comes on to the end of the show, the higher the chances are of being noticed. A few minutes before the show opened, producers decided to put UDI on second.

Once onstage, the dancers, shrouded in total darkness, ‘painted’ an entire story about the struggle between good and evil, using only light and acrobatic moves. The audience saw butterflies being caught by a carefree chap, a cyclist pedalling away, swords and mysterious masks appearing out of thin air, and, ultimately, the triumph of the light over dark.

“Evil” — the character glowing dark red — was portrayed by Denis, while Igor played  “Good” — the blue one. The dancers refuse to reveal how exactly one of them managed to fly over the stage and the other ride an 'invisible bike', but they admit there were some complicated techniques involved.

“The way we do it is secret, which is why people are surprised. We did it all with our hands, legs and bodies,” the artists joke. They say the performance was inspired by the late U.S. singer Michael Jackson.

“He is our idol! We all grew up listening to his songs. We once saw his performance in Bucharest, with glowing white skeletons dancing in the dark. That was what we based our act on,” Denis explains.

“After each act, the show’s technicians were supposed to upload a video of it on YouTube, so that people could watch it and vote. Our video was not uploaded, apparently because of some system error," he explains. "But as soon as the vote was over, it appeared on YouTube immediately… That said, what counts most is the fact that we were there!” the dancer adds.

UDI finished tenth out of twelve acts, which was won by Jules O’Dwyer and her Border collie Matisse. But the Siberian group still managed to impress people worldwide - the video of their performance became a YouTube sensation with more than 10 million views. Another video posted to Facebook also topped 10 million hits.

Back in their native Tomsk, the finalists were mobbed by locals and personally greeted by the governor of Tomsk region, Sergey Zvachkin.

Tomsk city authorities gave the dance school UDI runs nearly three thousand square yards of land and £60,000 to construct a new building. The money is to be allocated from the 2016 city’s budget.

The dancers say they have been inundated with offers to tour internationally following their BGT appearance. They plan to begin their tour in China late June and will also perform in United Arab Emirates, Australia and Germany. UDI have also accepted an invitation to perform in London with a new act. “We are not yet spoiled by fame, so we would like to tour all the countries we can and see as much as possible. But then we will of course return to our cozy little town, to our families and kids,” Sergey Sharov says.