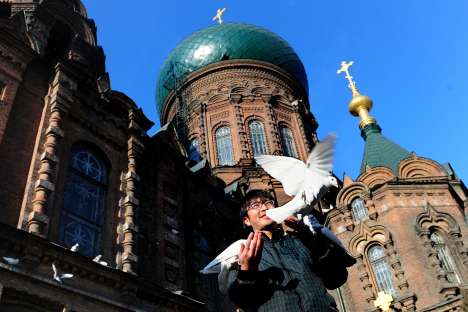 Even as the Asian powerhouse moves forward and looks at the future, there are still traces of a Russian past in cities like Harbin and Dalian.

On a late-winter morning, the snow flurries fall gently on the giant green onion dome of a Russian Orthodox Church. A voice or two can be heard in Russian but as the city wakes up, the dominant language on the street is Chinese. In terms of architecture and heritage, Harbin, in the north-eastern Heilongjiang province, is probably the most Russian city outside the former Soviet Union.

Founded in the late 19th century by Czarist Russia as a major point in the Trans-Manchurian (China Eastern) Railway, the city maintained a distinctly Russian flavour right till the aftermath of the Second World War. A large number of Russians in Harbin in the 1940s were “White” émigrés who escaped the Bolshevik Revolution.  The Red Army, which briefly occupied the city after the Japanese were evicted, forcibly sent many Russians back to the Soviet Union leaving less than 50 compatriots in the city.

“My grandparents migrated to Australia,” says Eugene Pankov, an ethnic Russian who was born and raised in Sydney. Pankov is among a small but growing number of Russians who are back in the city, now one of China’s economic powerhouses.  “There’s little of the city left from the time babushka lived here,” says Pankov.

The so-called Cultural Revolution, a period of madness in the 1960s and 70s wrecked havoc on many of the city’s Russian buildings, including the St Nicholas Church, which was demolished. The beautiful St Sophia Church with its large green onion dome still stands and is the most visible reminder of the city’s Russian past. The authorities decided to convert the church into a museum, whose interiors can be a bit shocking after a glimpse of the neo-Byzantine exterior. However, to get a real glimpse of Russian life in the city at its peak, there is a very good collection of old pictures in the museum.

The city’s walking street also has several turn of the 19th to 20th century buildings, and can easily remind one of Khabarovsk, which is relatively close to Harbin and has maintained and tastefully restored many of its pre-Civil War architectural gems. Yet Eugene Pankov, who is looking to write a book about Harbin’s Russians, complains that the authorities are in a hurry to remove any old structure that may not have any tourist value.

Pankov’s views echo a series of complaints that this writer has heard in different parts of China. A charismatic retired Chinese official, who was “adopted” by a Russian woman in the 1950s, says in flawless Russian that modernisation was the important contribution by Deng Xiaoping and that Harbin is a city that looks more to the future than the past. He argued that the last three decades were proof that Deng’s policies were right.

There is one strong Russian legacy that is now part and parcel of Chinese Harbin: a love of ice-cream. Unlike warmer cities to the south, locals in Harbin love a nice ice cream no matter how cold the weather is.

Distant Port by the Yellow Sea

Dalian, or Dalny (far in Russian) as the Russians called the city that they developed in the late-19th century, was linked to the China Eastern Railway and Harbin. It became Russia’s primary port in Asia. Dalny, which was under lease from the Qing Dynasty, was initially supposed to be a port that would rival Shanghai, but ended up being the main theatre in the Russo-Japanese War of 1904-5. The city slipped into Japanese control during the Second World War but the Soviet Union liberated it at the end of the war and administered it until 1950.

Although there was less of a Russian presence in Dalian when compared to Harbin, the city has a strong Russian heritage, which it takes a great deal of pride in. The oldest street in Dalian is called Russian Street and was restored in the mid-1990s under the leadership of then-mayor and now disgraced politician Bo Xilai. The street has a collection of early 20th century architecture including the Russian town hall. Although a number of structures on the street are restored old structures from Dalny, quite a few are new buildings that were built after Russian architects were brought in. A few of the buildings were also given Russian facades to give the street an authentic Russian look.

The Russian language has completely faded away from the consciousness of the prosperous city, now a major international port and a gateway for China to South Korea. Unlike Harbin, the Russian heritage is not the raison d’être of a visit to Dalian, yet the proximity to Russia, the presence of a growing Russian community and historical links keep the city connected with China’s northern neighbour.

As Moscow and Beijing once again grow closer, there is a renewed interest in the Russian language in China. Cities that are close to the Russian border like Heihe, near Blagoveshchensk and Suifenhe, near Vladivostok, have positioned themselves as gateways to Russia. Not only do an increasing number of Chinese speak Russian in these towns, a small number of enterprising Russians are setting up shop across the border. While it’s unlikely that these towns will have Russian streets with classical architecture like Harbin and Dalian, they are sure to bring the people of the two great countries together.