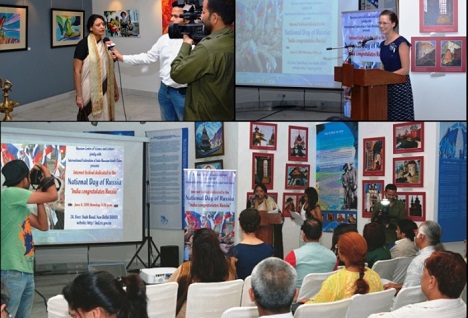 The celebration connected with over 18000 people across India and Russia through Facebook, and saw huge numbers of goodwill messages for the ‘Day of Russia.’ Source: RCSC

25 years ago, on June 12, 1990, the present Russian state came into being when the First Congress of People's Deputies adopted the Declaration of State Sovereignty of the Russian Soviet Federative Socialist Republic. It is a landmark date in Russia’s history, and a national holiday celebrated with much fervour and festivity.

India has always had cordial relations with Russia, and the relationship between the two nations is that of a trusted friend, ally and partner. The relationship with Russia is a significant aspect and achievement of India's foreign policy.

To mark the Russian National Day this year, the International Federation of Indo Russian Youth Clubs (IFIRYC) along with the Russian Centre of Science and Culture (RCSC) in New Delhi organised First Internet Festival dedicated to the Day of Russia. The Festival started on the 24th May and ended on the 8th June, at the RCSC. This was a one of a kind event in which IFIRYC undertook to digitally preserve the strong bonds of friendship India shares with Russia.

The Indian audience connected with the Festival organizers to congratulate the Russian over Skype.

“I congratulate my Russian friends on the occasion of the Russian National Day through Internet technology. I hope the upcoming visit of our Prime Minister Narendra Modi at the BRICS International Summit to be held in Ufa, Russia this year will herald a new era of friendship. I congratulate President Vladimir Putin for his admirable and tireless work for BRICS nations’ reforms and global peace,” said Purnima Anand, IFIRYC President, in her welcome address.

Kakar of Micromax said Russia would always be special for their company as it was the first foreign market they entered.

Press Attache Kutinova delivered a message on behalf of Russia’s Ambassador to India, H.E. Alexander Kadakin, in which he said the relationship between India and Russia is a unique international phenomenon, immune to adverse external impacts. The Ambassador’s message also appreciated Indian President H.E. Pranab Mukherjee’s recent visit to Russia.

The bilateral Friendship Society’s Singh said they celebrated the announcement to observe June 12 as Russia’s National Day. Kohli from Micromax Russia connected with the audience on Skype and congratulated Russians.

Dr. Vladimir Akinfiev, Founder- Chairman of IFIRYC and expert on education and culture of India and South East Asia, appreciated the initiative to organize the First Internet Festival. “This event will be a milestone to build Indo Russian relations with new generations,” Akinfiev said.

Alexander Gustalov, at Russian Institute for cultural and natural heritage (Southern branch, Krasnodar), connected though Skype and conveyed greetings from Southern Russia. “There are many states in India and they are all different, but India and Russia are not different states of one country they are one same state”, he said.

Arseny Starkov, Chief Consultant, RCSC connected to Tatiana Seliverstova, Head of the International Department, Russian Youth Union, who said she looked forward to visiting India again to further strengthen ties between them and their BRICS partners.

The celebration connected with over 18000 people across India and Russia through Facebook, and saw huge numbers of goodwill messages for the ‘Day of Russia.’

Aditya Kumar, who posted poem on Indo-Russian friendship in Hindi and English, was present to recite his poem.

2015 was announced as the Year of Literature in Russia.

The major highlights were cultural shows by Russian and Indian artists.

An art exhibition, ‘Friendship of People of India and Russia,’ was organised by Gallery Sree Arts & Jewels. The gallery’s founder, Jitendra P. Jain, showcased paintings by various Indian artists. Some artists present explained the aspects of Indo-Russian friendship they had tried to depict through their works.

The Photo Exhibition ‘Treasures of Russia,’ which was inaugurated during the programme, comprises over 50 pictures and will remain open till the end June.

The Festival was telecast live by BRICS International Forum on Youtube. (Broadcast can be watched on below link).

The Russian ‘Oscar Jazz Band’ performed at the RCSC on June 10. The event was dedicated to the 70th anniversary of Victory over fascism in the Great Patriotic War.

Ambassador Kadakin was present at the cultural extravaganza, jointly organised by the Russian embassy and RCSC, as were Sergey Karmalito, Senior Counsellor, Russian Embassy, and Fedor Rozovskiy, Director of the RCSC. The audience comprised members of the diplomatic corps, Indian cultural and political elite, the leadership and activists of partner NGOs, music and art lovers, Russian compatriots, media men, Russian language teachers and university students.