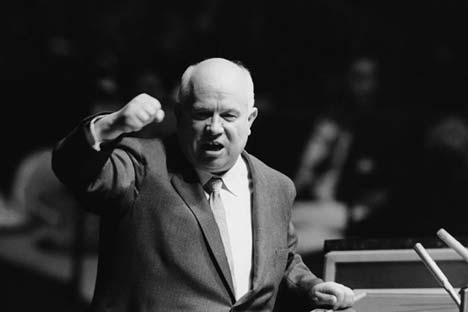 Nikita Khrushchev, who led the USSR through much of the ‘Cold War,’ actively supported the “Battle mole" project. Source: AP

Reports indicate that, at the height of the ‘Cold War,’ Nikita Khrushchev secretly ordered ‘subterrines’ or ‘battle moles’ to be built to destroy US underground communications and military facilities. The idea of building a machine which, like a mole, could dig tunnels underground and penetrate deep inside the earth undetected, has not only fired the minds of science fiction writers, but also of serious scientists and designers.

The USSR was, at the height of the ‘Cold War,’ secretly developing “battle moles”, capable of destroying the enemy’s underground communications systems, buried and camouflaged control points, capable of undermining arsenals hidden deep within the rock strata.  These subterrines would be capable of silently infiltrating deep into enemy lines, to crawl out and take on land troops where no one was expecting them.

In the early twentieth century such subterrines were seen as super-weapons.

The first underground self-propelled combat unit was designed by Pyotr Rasskazov, from Moscow, back in 1904. At the beginning of the First World War, his drawings were lost, only to emerge later, in Germany.

In the early 1930s, the Soviet Union revived this idea. The person tasked to work on creating a "battle mole" was engineer Trebelev. He wanted to design a machine which would look like a real mole. He managed to build and test a prototype, but the project was stalled.

The “Battle mole" project was more classified than even the Soviet nuclear project, and details about it remain sketchy. What is known, however, is that Nikita Khrushchev, who led the USSR through much of the ‘Cold War,’ actively supported the project.

That a secret underground plant for production of subterrines was built in Ukraine is also known. And, in 1964, the first Soviet subterrine nuclear reactor, dubbed "Battle mole" was unveiled.

Little information is available about this reactor except that the subterrine had a stretched titanium cylindrical body with a pointed end and a powerful drill. According to sources, the size of the atomic subterrine ranged between three and almost four metres in diameter and 25 and 35 meters in length. The speed at which it could move underground was between 7 kms / hour and 15 kms / hour.

Also, available data indicates that the nuclear physicist Andrei Sakharov was involved with the creation of this machine, possibly with development of the original soil crushing and propulsion system technology. The ‘cavitation’ flow created around the battle mole’s body reduced friction and enabled it to bore through granite and basalt.

The crew of the "Battle mole" consisted of five people. The machine could additionally carry up to 15 paratroopers and about a ton of cargo; explosives or weaponry. These combat vehicles were designed to destroy fortifications, underground bunkers, command posts and missile launchers located inside mines. The "Battle moles" were prepared to carry out a special mission.

According to the Soviet Union’s military command, the plan was that if relations with the United States deteriorated beyond a point, the subterrines could be used for an underground strike on America.

The “Battle moles" would be brought on submarines to the coastal waters of the seismically unstable California to drill underground inside the USA and install underground nuclear charges in areas where American strategic facilities were located.

The activation of the nuclear mines in the region would provoke powerful earthquakes and tsunamis, all of which would be considered natural disasters.

According to some reports, test runs of the Soviet nuclear subterrine were carried out in different geological conditions; in suburban Moscow’s soils, in the Rostov region and in the Urals. Witnesses who observed the tests were most struck by the capabilities the subterrine demonstrated in the Ural mountains. The "battle mole" easily bit into hard rock and destroyed the underground target.

However, a tragedy occurred during the repeated trials. For reasons unknown, the machine exploded deep within the bowels of the Urals, killing the entire crew.

Shortly thereafter, the project was shelved.

Based on materials by Rossiyskaya Gazeta.