Russia Day celebrations in India: a view from inside 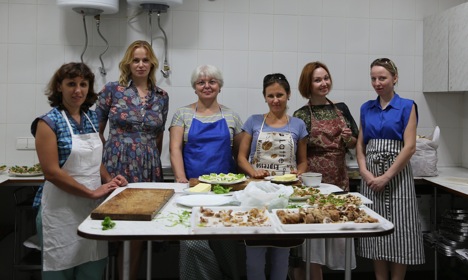 The kitchen entrance of the Russian Embassy in India is behind one of the many inconspicuous doors to the rear of the diplomatic mission. Source: Alessandro Belli

As celebrations for the Day of Russia in India wound down, this reporter went behind the scenes to witness the bustling preparations for the main reception, and got a look at what went into the sumptuous menu, along with the Russian Ambassador, who outlined his personal culinary preferences!

Russia Day celebrations in the Indian capital have ended. This RIR reporter learned how the preparations went for the main reception on June 12, and had a chat with the Ambassador of the Russian Federation in India, Alexander Kadakin, in the embassy’s kitchen.

"In India reception is a friendship event"

The kitchen entrance of the Russian Embassy in India is behind one of the many inconspicuous doors to the rear of the diplomatic mission. After 15 minutes of searching, we went in and found nearly 20 women there, laying out canapés, baking fish and cutting fruit. After a promise to help them cook, the ladies agreed to tell me about their relationship with cooking.

"In fact, we have been here for three days,” said Natalia Korableva, the embassy chef. “The meat was delivered on the evening of June 10, which we then butchered, cut, and so on. June 11 was dedicated to the main dishes. Today (June 12), we are preparing for the actual reception.”

Natalia has been working at the Embassy in India for 10 years, although, by her own admission, she always dreamed of becoming a pastry chef.

"I even have a favourite cake; ‘Curly boy.’ It owes its name to the combination of dark and light layers, covered with hot glaze and sour cream, which look like curls.”

Together we come up with a new name for the cake; "Alexander Pushkin," and take a promise that the next time she will prepare it for the reception.

Suddenly, Ambassador Alexander Kadakin appears at the door. At first he is surprised to find us in the "holy of holies" of the Embassy; as he calls the kitchen, but then the view of freshly-made cutlets ready to be put in the oven distracts and melts him.

He admits to be a fan of cooking himself. Once his personal assistant Dmitry Maltsev turns away, we turn on the voice recorder.

"I can have cutlets as a first, second and third dish,” he says. “If necessary, I can easily prepare them myself. And not only cutlets. I can also make dough and pel’meni (Russian ravioli). What did you think? "

The idea of Russian food being prepared by the embassy staff themselves was born in the USSR, he said, and is widespread in the diplomatic missions abroad.

"All the embassy staff are contributing to the preparation of the reception. It’s a very important event, because we are receiving our friends. In India, the reception is a friendship event ".

"At the same time, the Indian chefs will be cooking their national dishes. The Indian menu is as extensive as the Russian,” Ambassador Kadakin explained.

To decide on the menu and other reception details there is an entire commission of 20 people, headed by the Ambassador himself.

"After each reception, we introduce some updates, depending on our guests’ preferences,” he said.

"A woman should know how to cook"

Meanwhile, we get back to Natalia and ask whether a woman should know how to cook. When is the best time to get the answers to our vital questions, if not before Russia Day?

"Yes she should. A woman should know how to cook,”she says, without hesitation, but adds that it is better when both spouses cook.

Victoria Kusakina, Biology teacher at the embassy school, agrees: "Cooking together is a great way to achieve harmony in the kitchen.”

Evgeniya Karmalito believes that cooking together for the reception is aimed at uniting the team. “Many people get to know each other nowhere else but in the kitchen,”she says. “The embassy is very big, and some people meet each other twice a year during cooking.”

We follow the smell of roasted pork and run into embassy student Varvara. Hooray! Modern girls actually do know how to cook. We just haven’t searched well earlier!

“It depends on the girl, I myself am against stereotypes,” she said. “In a few years anyone can learn how to cook.”

About 40 women in all are cooking. In the evening, they will change the aprons for dresses, and replace neat pony tails with dressy curls.

Over the past four years that I have lived in India, I have never come across two similar dresses at the reception.

"The secret is that we begin preparing in the morning,” Kusakina said. “Like now, I am cooking and at the same time thinking what make-up and dress to wear.”

The other women smiled. They'd already thought of theirs.

"Indian cuisine is one of the most interesting ones"

We call our editor in Moscow, asking to give Natalia Korableva and Evgeniya Karmalito the honorary title of "old-timers". The latter has lived in India for eight years- since 2007.

"When I arrived, I began to master Indian cuisine with great interest. Indian cuisine is one of the most interesting,” Evgeniya said. “Now I have a broader view of things and I prefer fusion.”

Her suggestion is to take a "deliberate approach" to Indian recipes: "Often at receptions one finds Palak Paneer (cottage cheese in spinach sauce). However, the right Palak Paneer is never served at receptions. It should be green, and at receptions, after being warmed, up the dish turns brown.”

"Russians find Indian food too spicy and oily, while for Indians, Russian food is bland, tasteless,” she said. “Therefore, one should take a creative approach to cooking.”

Before coming to New Delhi, Artur and Olga Gerbst worked in the Russian Consulate General in Calcutta. Olga, among others, has been in the kitchen since morning.

"Thanks to Indian cuisine, I learnt how to mix the spices right," she said.

Indian food has become an integral part of the food selection that she offers her guests.

"When I return to Russia, I will certainly continue to cook Indian food. All my Russian friends love it,” she added.

Torn between the chance to taste the culinary endeavours of the embassy ladies and to interview the Ambassador, we managed not to forget about the most important thing and photographed the main menu, prepared specially for the reception in India.

Published for the first time for the readers of RIR only:

- With red fish and lemon,

- With ham and pickled cucumber,

- With roasted pork and sweet peppers,

- With pate and olives,

- With hard cheese and pineapple,

- Shrimp in sweet and sour sauce.

- Shrimp in sweet and sour sauce,