Russians take up yoga with a passion 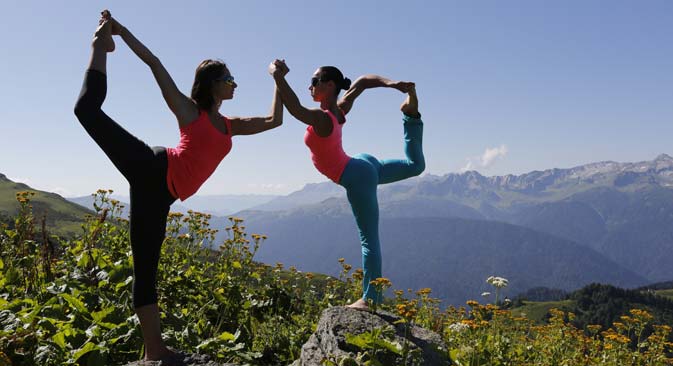 Yoga has spread across the length and breadth of Russia. Source: Valery Matytsin/TASS

The Indian spiritual, physical and mental practice is growing in popularity across Russia, even as Russians adapt the discipline to their living conditions and lifestyles.

It came as a surprise to few when Russia decided to co-sponsor the India-initiated United Nations Resolution to mark June 21 as the International Day of Yoga. Russia’s most famous practitioner of the Indian spiritual, physical and mental discipline is Prime Minister Dmitry Medvedev, under whose presidency in 2004-8, yoga gained immense popularity in the country.

The Indian diplomatic missions in Russia are partnering with regional governments, the Yoga Federation of Russia, socio-cultural organisations and Yoga centres to organize events across the country on June 21. The biggest such event is being organized in Moscow’s historic Sokolniki Park, where over 3000 people are expected to gather for a yoga demonstration.

Other Russian cities are also celebrating the day with enthusiasm. Vladivostok is expected to have more than a thousand participants in its program. The mayor of the Siberian city of Novosibirsk assured Indian Ambassador P.S. Raghavan that special zones would be set up in parks to hold yoga demonstrations.

Over the last two decades, the number of yoga practitioners has risen ten-fold to more than a million.  The Russian language version of Yoga Journal, which celebrated its tenth anniversary recently, estimates that 1.3 million practitioners spent close to $1 billion on the discipline last year. A survey conducted by the magazine revealed that around half of the yoga practitioners in Russia are between the ages of 16 and 34.

Moscow, whose only options at the start of the millennium were a studio of Iyengar Yoga and Ashtanga Yoga, along with classes at the Indian Embassy’s Jawaharlal Nehru Cultural Centre, now has 268 yoga studios, according to Yoga Journal.

Yoga set up it roots in Russia over a hundred years ago. Historical records indicate that yoga was practiced by the in Russia in different forms by the artistic and intellectual elite since the late 19th century. Legendary theatre director Konstantin Stanislavsky famously incorporated several yogic asanas (poses) into his Stanislavsky System as a means for developing attention and concentration. It was compulsory for artists in his studio to master these asanas before they could perform.

Even at a time when the state frowned upon yoga, some enthusiasts were keen on promoting the discipline.  In 1971, Viktor Boyko, a construction engineer and follower of B.K.S. Iyengar, translated a book written by his yoga guru. Boyko, a resident of the Crimean city of Sevastopol, became a follower of Iyengar when he was 16 and translated the book eight years later.

It wasn’t until the 1980s that the government in Moscow started exploring what was considered non-traditional healing methods.  The Soviet Ministry of Health sent PhD student Elena Fedotovato India to study yoga and visit various ashrams.  She met Iyengar, whom she managed to invite to Russia.

Iyengar visited the country twice, first in 1989 and then twenty years later. In 2009, he conducted special workshops on all yogic asanas followed by classes on pranayama (breathing exercise) under the auspices of Yoga Journal Russia. He also met then-Russian President Dmitri Medvedev and taught him some asanas.

The yoga guru’s visit to Moscow in 2009 was one of the major events in the European yoga calendar and attracted practitioners from across the continent. In many ways, it set the trend for the growth of yoga in the country.

From Kaliningrad to Khabarovsk

Over the last decade, Yoga’s popularity among the fitness conscious and those seeking spiritual solace has grown by leaps and bounds.  Yoga classes are trendy and are conducted in all sorts of environments from Moscow’s five-star hotels that charge around $50 for a 90-minute session to smaller yoga centres in the region that are trying to reach out to cash-strapped university students.

Several yoga teachers have been initiated into the discipline in India. A large number of young Russians are shunning Goa and spending their winters in yoga ashrams in towns like Rishikesh and Hardwar.Other popular places for Russians to learn yoga include the Osho Ashram in Pune and the Art of Living Centre in Bangalore.

“I hope to be able to set up a small yoga studio in Kaliningrad,” says Alina Goncharova, a resident of the Russian Baltic enclave, who spent the last three winters in Rishikesh.  She worked in a travel agency and stumbled upon yoga during a tour to India. “I have become a healthier and calmer person and live a more balanced lifestyle and eat a healthy and natural diet,” Goncharova says. She believes that yoga should be introduced in schools in Russia, but agrees that the religious affiliation of the discipline may make some parents wary.

Evgeny Kovalski, a resident of the Russian Far Eastern city of Khabarovsk plans to build an ashram in the outskirts of his hometown. He learned yoga at a centre in the Palakkad district of the southern Indian state of Kerala. He has also started a vegetarian catering service in Khabarovsk.

“People have the wrong idea in Russia that meat is essential to surviving the winters,’ Kovalski says. “It’s absolutely not true…vegetables, pulses and nuts contain all the nutrition that is needed and it’s through yoga that I was able to discover these choices.”

Khabarovsk, like many cities in Russia, has an Art of Living Centre that conducts yoga programs under the guidance of Sri Sri Ravi Shankar.  Many universities are starting to offer to offer the Indian discipline as a sport in their academic and extra-curricular programs. The best-known yoga program at an educational institution is the one conducted by the People’s Friendship University of Moscow.

“If we can slowly introduce holistic life changes in Russia that combine yoga and Ayurveda,” we can dramatically improve public health,” says Maxim Kuzmenko, a life coach and yoga practitioner based in Moscow. “For this, we should increasingly look at India, which is the origin of both.”  Kuzmenko plans to take around ten of his clients for the International Yoga Day event in the capital’s Sokolniki Park.