Work of renowned British architect goes on show in Russia 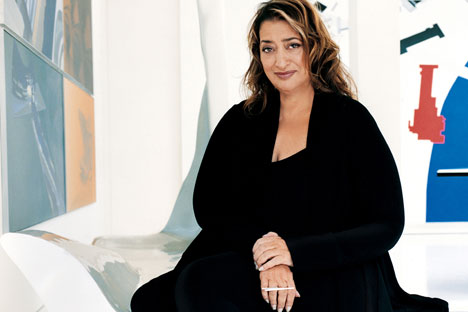 A joint project between the famous art gallery and Hadid's London studio, it embraces 300 items – from models to photographs; compact drawings to massive building designs. All fields of the architect’s works including lesser-known areas, such as jewelry and marine designs are present. Many of the exhibits have never before been on public display.

The exhibition, which opens June 27, coincides with the 10th anniversary of Hadid’s Pritzker Prize - the architectural world's top international award. Last year's awards ceremony was held at the Hermitage, prompting the idea for the exhibition, curator Kseniya Malich told RBTH.

"We decided it was time that such a significant artist returned to the museum and was fully presented."

Although the Hermitage has new additional space reserved for modern art at the General Staff Building adjacent to the historic Winter Palace that houses the main collection, Hadid's works are being shown in the luxurious imperial interior of the Nikolaevsky Hall with marble wall and grisaille ceiling created by Vasily Stasov in the 1850s. “It was done deliberately,” Malich said. “We wanted to stress that these pieces deserve to seen in such an important historic context. We wished to show that Hadid is equal to that test and express the continuity between epochs in architectural history.”

The exhibition has been designed around the space in which Hadid's works are shown; Nikolaevsky Hall has been specially adapted to host the showcase.

The exhibition has been designed around the space in which Hadid's works are shown. Source: Press photo

“We worked in the close contact with studio in London. The Hadid team created the concept there and our designers fulfilled it here in St. Petersburg," Malich said. "It was a novel experience of extremely close collaboration for me."

Hadid is familiar with Russian architectural and artistic movements. When she received the Pritzker prize, Hadid said that “the spirit of adventure to embrace the new and the incredible belief in the power of invention” attracted her to Russian art. “I realized how modern architecture built upon the breakthrough achieved by abstract art as the conquest of a previously unimaginable realm of creative freedom,” she said at the time.

Now in one of the world's greatest art museums, she will show the results of that freedom. Visitors to the Hermitage will see the projects that first brought success to the architect and her famous works of recent years, including the Heydar Aliyev Centre in Baku, Guangzhou Opera House in China and the London Aquatics Centre.

The Hermitage stages Francis Bacon exhibition in the UK