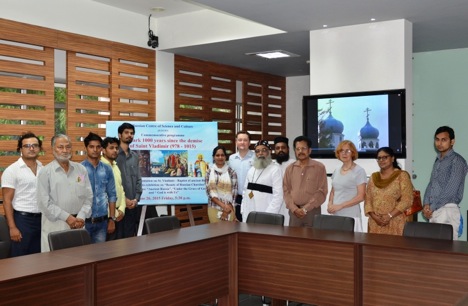 Participants of the meeting spoke about Saint Vladimir and underscored his noteworthy contributions. Source: RCSC

A function was held at Delhi’s RCSC to commemorate Saint Vladimir, the patron Saint of Russia and the man credited with establishing the Christian church through medieval Russia. The event marked 1000 years of his death in 1015.

Tributes were paid to Saint Vladimir (978—1015), who was baptised and adopted Christianity for his kingdom in medieval Russia, at a programme to mark 1000 years since he died. The commemorative event was held at the Russian Centre of Science and Culture in New Delhi on June 26, 2015.

The Very Rev. Skariah Ramban of the Delhi Orthodox Church was Chief Guest for the occasion. He was accompanied by Father Johnson Iype, Orthodox Church, Hauz Khas.

The programme comprised a multi-media presentation on St. Vladimir; Baptist of Ancient Russia; by Tatyana Shipilova, Director, Institute of Russian Language, RCSC, a Book and Photo Exhibition on “Beauty of Russian Churches” and the Screening of film “Under the Grace of God.”

Tributes paid to Mikhail Sholokhov at the RCSC in New Delhi

Vladimir was a prince of Novgorod, grand prince of Kiev and ruler of Kievan Rus from 980 to 1015. Vladimir's father was prince Sviatoslav of the Rurik dynasty. After the death of his father in 972, Vladimir, who was then prince of Novgorod, was forced to flee to Scandinavia in 976 after his brother Yaropolk had murdered his other brother Oleg and conquered Rus'. In Sweden, with the help from his relative Ladejarl Håkon Sigurdsson, ruler of Norway, he assembled a Varangian army and re-conquered Novgorod from Yaropolk. By 980 Vladimir had consolidated the Kievan realm from modern-day Ukraine to the Baltic Sea and had solidified the frontiers against incursions of Bulgarian, Baltic, and Eastern nomads. Originally a follower of Slavic paganism, Vladimir converted to Orthodox Christianity in 988 and christianized the state.

Vladimir was baptized at Chersonesos, however, taking the Christian name of Basil.The sacrament was followed by his wedding to Anna, the Byzantine princess. Returning to Kiev in triumph, he destroyed pagan monuments and established many churches, starting with a church dedicated to St. Basil, the splendid Church of the Tithes (989) and monasteries on Mt. Athos.

Basil II turned to the Kievan Rus' for assistance, even though they were considered enemies at that time. Vladimir agreed, in exchange for a marital tie; he also agreed to accept Christianity as his religion and to Christianize his people. When the wedding arrangements were settled, Vladimir dispatched 6,000 troops to the Byzantine Empire, and they helped to put down the revolt.

Vladimir then formed a great council out of his boyars and set his 12 sons  over his subject principalities. According to the Primary Chronicle, he founded the city of Belgorod in 991. In his later years he lived in a relative peace with his other neighbors: Boleslav I of Poland, Stephen I of Hungary, Andrikh the Czech (questionable character mentioned in A Tale of the Bygone Years). In 1014 his son, Yaroslav the Wise, stopped paying him tribute. Vladimir decided to chastise the insolence of his son and began gathering troops against him. Vladimir fell ill, however, most likely of old age, and died at Berestovo, near Kiev. The various parts of his dismembered body were distributed among his numerous sacred foundations and are venerated as relics.