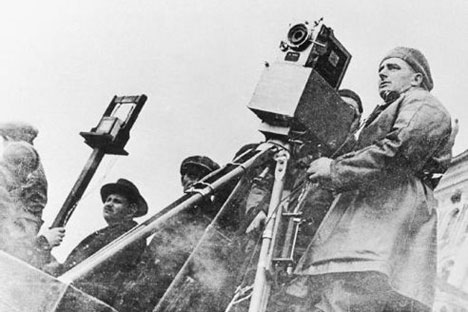 Due to the competition, some movie dealers are committing a new kind of crime. Police have managed to trace and locate a gang of so-called “movie interceptors.” Source: Press photo

A sensation is roiling the movie market. The strong competition among film distributors has reached a climax. The rental offices are currently very busy preparing for the upcoming season to ensure the necessary stock of movies in order to have a repertoire by fall.

Due to the competition, some movie dealers are committing a new kind of crime. Police have managed to trace and locate a gang of so-called “movie interceptors.”

Following a thorough inquiry, police arrested an “interceptor,” who turned out to be a 16-year-old boy, Sergei Yaichkov. Yaichkov, who worked in the Petrograd branch of a movie plant, confessed that he was well acquainted with the delivery methods of movie rentals from Petrograd and back.

The Kazan railway office is providing its employees with a very picturesque corner of the earth, acquired by the company to build a village for a scout camp.

A wonderful, almost virgin pine forest, which is weaved with large meadows surrounded by young fir trees bordering the Moskva River, creates the perfect backdrop for scout activities and games.

A large program of activities has been scheduled – nature walks, scouting activities, lectures and workshops on first aid, gymnastics and sports.

At a recent forum that discussed the high cost of living, one of the speakers on the issues of transport touched on a theme that is a sore subject for modern man. Having calculated the capacity of our railways, the speaker posed a question to the group: what is more important for transport at the present time – coal or meat?

Weighing the value of meat as food and coal as a necessary product for the functioning of our industry, the speaker came to the conclusion that we need to give up meat in order to free the way for the transportation of coal. This conclusion did not strike any of the participants as strange.

Do people eat horsemeat? This question naturally arises from the circumstances of the current beef crisis. The acting head of the city horse slaughterhouse, N. Zuyev, gives an affirmative answer.

“The consumption of horsemeat has risen dramatically in recent years,” Zuyev told our reporter.

Due to colossal demand, prices for this type of meat have also increased. But, of course, they are much lower than the price of beef even in their present form. One pound of first-grade horsemeat now costs 14 kopecks, even though until recently this never cost more than eight kopecks. Of course, the increase in the consumption of horsemeat is not due to the needs of the Muslim population. Part of the Christian population has switched to horsemeat because of the high prices.

We are certainly witnessing the birth of a new type of playhouse: summer courtyard theaters. The recipe for the establishment of such a theater is quite simple: take any Petrograd courtyard, no matter if it previously hosted a stable or an ice-skating rink – nobody is concerned about the past! – and build a theater there with kiosks, stages, and most importantly, a canteen, and a new theater is ready, literally in one moment.

The Olympia, which opened yesterday, is one such hastily made “courtyard theater,” established exactly according to the above recipe.

The main advantage of the new theater is that it is located on a large plot of land that lacks grass or even a single tree. The theater sheltered a troupe, which gave a lively performance of a fun farce called “Earthly Paradise.”