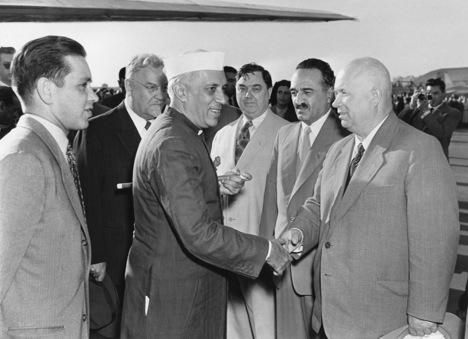 Indian Prime Minister Jawaharlal Nehru’s first official visit to the USSR, in 1955, laid the foundations for India’s rapid industrialization and was the cornerstone of the special bilateral relationship the two countries share.

Dozens of summits have been held between India and Russia (USSR) since India became independent in 1947. The first summit that took place, however, was truly an historic one and remains special.

It was 60 years ago, in 1955, when India’s first Prime Minister Jawaharlal Nehru embarked on his first official visit to the Soviet Union. It was Nehru’s second visit to the USSR, after he visited Moscow in 1927, with his father Motilal Nehru, to participate in the 10th anniversary celebrations of the October Revolution.

Nehru’s first official visit to USSR was delayed for several reasons. There was an intense debate in India about which country; USA or USSR, should be the first destination in the Indian Prime Minister’s calendar of foreign visits. Nehru and his confidantes hoped India would receive assistance from the West to eliminate crippling colonial backwardness through rapid industrialization.

Also, Soviet leader Josef Stalin initially had a negative view about Nehru, who was described as the ‘running dog of world imperialism’ by his ideologues.

So Nehru decided he should pay his first official visit to the USA, in 1949.The visit was a disappointment and belied Nehru’s expectations of major US assistance for India’s economic development.

This triggered a debate in India’s foreign policy establishment about Nehru’s first official visit to USSR. India’s position on the Korean war brought about a dramatic change in Stalin’s attitude towards Nehru and the Soviet world view on India, which reflected in the gradual change in Moscow’s position on Kashmir and mutual warm overtures from both sides.

Preparatory work for Nehru’s successful Soviet visit was done a number of cultural events including the first ever Indian film festival, with leading film stars in tow, Indian art exhibition, launching of Nehru’s ‘Discovery of India’ in Russian being organized in the Soviet capital in the run up to the visit. Nehru then called Soviet ambassador Mikhail Menshikov to tell him that he was ready to visit the Soviet Union.

The visit started on 7th June. For the first time, Soviet Premier Marshal Bulganin and the entire CPSU politburo was present at the airport to meet the Indian dignitary.For the first time in Soviet history, soviet leaders and the visiting dignitary travelled in open limousines on roads leading to the Kremlin, waving to thousands of people gathered to welcome the Indian leader.

Two residences were at Nehru’s disposal; one in Moscow and one in a Moscow suburb, which he used to stay the night. On the third day, the Indian Ambassador hosted a reception where Nehru met Soviet leader Nikita Khruschev.

Nehru raised the first toast in honor of Soviet President Voroshilov, which was followed by Khruschev’s toast. These were not usual protocol speeches, but were described by India’s Ambassador KPS Menon as “serious political statements.” The speeches emphasized the need for peaceful co-existence between countries with different political systems, months before the 20th CPSU congress declared the concept of peaceful co-existence as the central element of soviet foreign policy.

He also witnessed cultural programmes, including at the Bolshoi theatre, where he watched Pyotr Tchaikovsky’s Swan Lake. Nehru and his daughter Indira (Gandhi), overwhelmed by the spectacle, presented bouquets to the legendary ballet dancer Maya Plisetskaya.

Nehru was accorded a very warm welcome everywhere. On one occasion Soviet deputy foreign minister Vasily Kuznetsov, accompanying Nehru’s delegation to different Soviet cities, caught a bouquet of roses and cut one of his fingers with the thorn. Kuznetsov humorously remarked, “I spilled blood for the sake of Soviet-Indian friendship”, sparking off laughter from the guests.

When the Indian delegation stopped at Magnitogorsk, the steel city spread on both banks of the Ural river, and Nehru stepped on the bridge from the east bank to the west bank, Kuznetsov said, “You stepped from Europe to Asia.” Nehru stopped for a moment and looked at the blast furnaces, factory smoke covering the skyline on the Asian bank and at the luxurious apartment buildings, theatres on the European bank of the river and said, “You think Asia would always work like this and Europe would always enjoy the fruits of their labour?”
As a result of this visit, USSR provided unprecedented assistance for India’s rapid industrialization, eliminating the colonial structure of the Indian economy and helping it to build a self-reliant economy.

Bhilai steel plant became the first factory to be built with Soviet assistance, becoming the flagship of Indian metallurgy and was followed by dozens of industrial enterprises in metallurgy, energy, space and machine-building that laid a solid foundation for India’s rapid industrialization.

India’s Ambassador Menon wrote in his memoirs that he had never seen Nehru so happy as he was during this visit. Known for his love of children, during his visit to the Artek pioneer camp on the Black Sea, Nehru announced that two elephants, Ravi and Shashi, would be gifted to the Soviet children.

After his gift of mangoes to the Soviet leadership, mangoes were apparently served at an official Kremlin dinner for the first time.

The visit’s success was viewed with scepticism by the West, with the International Herald Tribune editorial sarcastically commenting on “Mango Diplomacy” and “Elephant diplomacy in the Kremlin”.

Clearly, six decades later, “mango diplomacy” and “elephant diplomacy” have borne fruit, and Nehru’s visit remembered as a milestone event in the history of the bilateral “time-tested” friendship.