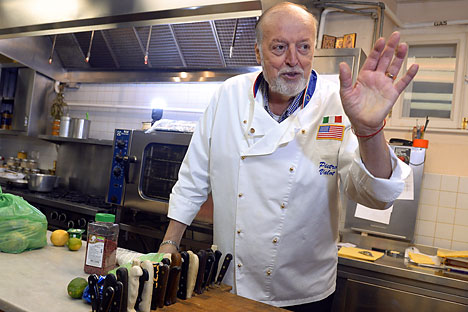 Pietro Valota arrived in the USSR in February 1975. Source: Kommersant

The head chef of the U.S. ambassador’s residence in Russia, Pietro Valota, an Italian, talks about how the mission’s kitchens are coping with the Russian embargo on EU food imports and shares his experience of cooking for ambassadors and presidents in 40 years of working at the embassy in Moscow.

“Well, off we go, to the battlefield,” sighs Pietro Valota as we step out into the guarded courtyard of Spaso House, the residence of the American ambassador in Moscow, in order to make it to Moscow’s main market, Dorogomilovsky, by nine. Valota is holding a shopping list with some 40 entries on it, scrawled in a mixture of Russian and Italian.

Once at the market, Valota is in his element.

“Hello, my dear,” he greets a woman selling vegetables. “Salaam aleikum!” He now turns to a greengrocer. He is a familiar face at the market and female vendors enquire: “Petechka, how are things with you?”

Knowing people makes logistics easier. At some stalls, produce for “uncle Petya” has been prepared in advance; for cheeses we place an order and come back to pick them up some 20 minutes later. Deep inside the market it is possible to find anything, be it mozzarella or gorgonzola.

“The president has banned cheese [imported from the EU, in response to Western sanctions imposed against Russia over its role in the Ukraine crisis – RBTH], but here it is,” says Valota.

“Not particularly, but sometimes yes, beef stroganoff or pelmeni. In any event, when you cook from Russian ingredients, you end up with Russian food…”

From northern Italy to the Soviet Union

The son of a miner and a housewife, having spent his early childhood with three sisters and two brothers in a small town in northern Italy, Valota first found himself working in a kitchen at the age of 14, before he even finished school. He came to Moscow when he was 28.

“A friend of mine invited me over here when he came home to Italy, to have an operation. At the time, he was working as the head chef at the U.S. embassy in Moscow and he needed a sous-chef.”

“I arrived in the USSR in February 1975. I remember there was a snowstorm the day I arrived… And the very next day there was a reception for 50 guests. Back then, I did not speak either English or Russian.”

Later he was also to meet his wife in the Soviet Union: “A friend of mine and I went to a restaurant and she invited her friend along. I fell in love and that very evening asked her to marry me.”

On the whole, Valota has got used to living in modern Russia, though he sometimes feels a little nostalgia for his younger years in the USSR.

“I remember when we went to the banya for the first time. There was a huge room with naked people in it, walking to and fro. I kept waiting for the steam to be switched on, but it turned out that the steam room was a tiny cubicle nearby. That was it, I decided that I had had enough. As for the rest, things were just like everywhere: holidays, guests, jokes that people would be telling each other on the balcony because the flats were bugged. I did notice occasionally that I was being followed. A couple of times they tried to recruit me.”

One of the responsibilities of the head chef is to remember and accommodate the gastronomical preferences of the ambassadors he serves. Valota is now on his 13th head of mission, John Tefft. When he started, the ambassador was Walter J. Stoessel (1974-1976).

“Cuisine that is in fashion now is more about show than about real food,” says Valota. “Take nouvelle cuisine for example: a large plate, a single prawn lying on top of a sardine and some decoration. And that’s your meal. It is ridiculous! You come home hungry and you end up eating sandwiches!

“What matters most to me is that people are happy. It often happens that I am summoned to the hall, people thank me and applaud. I like it. This is all the reward I want.”

Receptions, big and small, are part of his everyday routine. A recent menu for six people included a warm salad with prawns, veal scaloppini with mushroom sauce with asparagus, carrots and tagliolini on the side and ice cream to finish with. All that was cooked by Valota and his assistant.

Two days later they had to prepare a reception for 200 people, with 10 courses on the menu, as well as drinks, cheeses, crackers and nibbles and three desserts.

“Menus are prepared several days in advance and for the Independence Day reception on July 4, the menu is ready already by March. After the menu has been approved by the ambassador’s wife, nothing in it can be changed,” explains Valota. “Preparations for receptions like these sometimes take place at night, while cooking for the Independence Day reception starts five days in advance.”

“What food preferences did different ambassadors have?”

Making sensible economies is another daily concern on the head chef’s mind.

“For example, today I am cooking scaloppini, thinly sliced veal. In Italy you can buy the meat for it already sliced whereas here I had to buy a whole cut of meat. What shall I do with what is left of it? I could make minced meat but the ambassador is not so keen on cutlets. But he does like pelmeni, so the minced meat can be used to make pelmeni.”

In his 40 years of working for U.S. ambassadors, Valota has been to America only once: ahead of President Reagan’s official visit to the USSR. The Americans wanted to bring their own cooks, but the Spaso House administration would have nothing of it. So Pietro was sent to the U.S. for two weeks, for an “exhibition show” of sorts.

“I can’t say I liked it very much: We were accompanied by security guards everywhere, in the street and at the market. The border guard on immigration control in Washington did not want to let me into the country at all. I told him I was working at the American embassy but that was all I could say in English, so he did not believe me. Luckily, a customs official there turned out to be Italian, so we managed to find common ground.”

In the end, Valota was entrusted with cooking a dinner for Reagan in Moscow. However, U.S. secret service personnel had removed everything from the kitchen, including salt, and brought everything from the U.S., and one of them tasted the food before it was served.

“Have you ever cooked for Vladimir Putin?”

“Only if in his previous service he happened to visit one of the places where I worked and I knew nothing about it,” replies Valota.

This is an abridged version of an article first published in Russian in Ogonyok magazine. 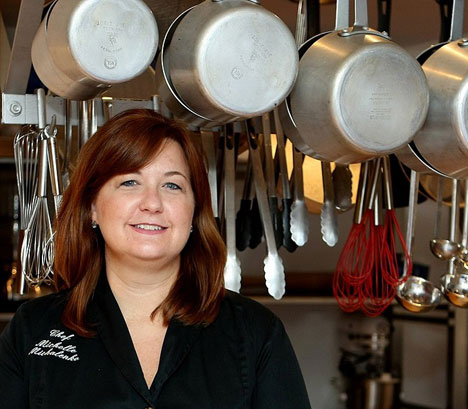 U.S. Embassy chef cooked her way from Michigan to Moscow