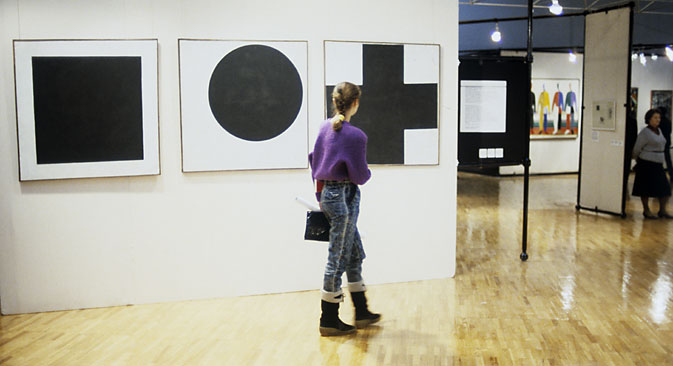 Yuriy Somov/RIA Novosti
Polish-Russian artist Kazimir Malevich's legendary Suprematist painting celebrates its 100th birthday this summer. The painting, which was first put on public display back in December 1915, has been an avant-garde icon ever since its creation. But how did this simple geometric work of art come to have such a far-reaching influence on artists the world over?

Just under 100 years ago, visitors to an exhibition of Futurist art in Petrograd (as St. Petersburg was then known) were surprised by a painting the like of which they had never seen before. The canvas, painted by - Polish-Russian artist Kazimir Malevich, was filled by a large black square, and nothing else.

The exhibition, named "The Last Futurist Exhibition 0.10." marked the first occasion that the public had been able to see the works Malevich had executed according to the principles of the Suprematist movement that he had invented, in which art was reduced to pure geometric forms that lent themselves to universal comprehension.

The painter's associates, as well as the public, were impressed by the painting Black Square. Without it was hung up at an angle below the cornice in the so-called "red corner" of the exhibition hall, in the position which, in accordance with the Orthodox tradition, domestic religious icons are usually placed. 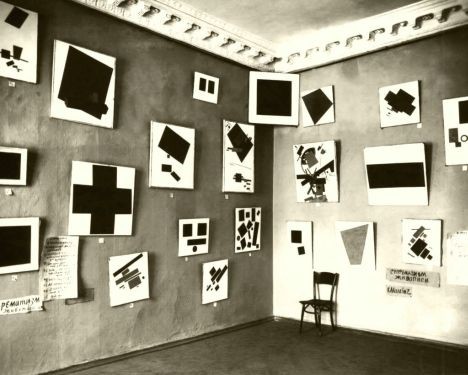 The painting, which was first put on public display back in December 1915, has been an avant-garde icon ever since its creation

Although the exhibition was held in December 1915, the 100th birthday of Black Square is being celebrated not in the winter but in the summer. Russian art scholar and Malevich expert Alexandra Shatskikh that the painting was created on June 21, 1915.

In the the cult of  Black Square and the Suprematist was spread throughout the narrow circle of Malevich's associates and students, with the movement's adherents in Europe constituting a single-digit figure. The fact that the artist's works hanging in Soviet museums were made inaccessible to the public from the 1930s onward also did not help Malevich's international fame. As Stalin’s grip on the country tightened, the memory of the recent avant-garde bloom was completely eliminated and Soviet art was no longer "exported" outside the Iron Curtain.

The return of Black Square

But nevertheless, Malevich was eventually to acquire world fame, albeit posthumously. However, this was not to happen until after World War Two, when a new boom of abstract art took off in Europe and the U.S. However, some of his Suprematist works could be found in New York's Museum of Modern Art even before the war and several paintings had found their home in private European collections.

However, interest in the artist blossomed after 1957, when Amsterdam’s Stedelijk Museum acquired a coveted, though barely known, collection from Germany.

Malevich had brought the collection to Berlin in 1927 as a personal exhibition and when he suddenly had to return home, he left the works with German architect Hugo Häring. The painter was never able to get the paintings back. Subsequently, Häring managed to conceal this artistic archive from the Nazi authorities, preserve it during the war and in the end send it to the Dutch museum. When the works were exhibited and reproduced in photo albums, they had an unimaginable effect on those who saw them. Even more incredible is that the lion's share of Malevich's legacy remained inaccessible to the western public until the advent of perestroika in the USSR in the 1980s.

St. Petersburg art historian and Russian avant-garde expert Irina Karasik believes that Malevich’s masterpiece ranks alongside the most influential artworks in history. "In the history of world art perhaps there is no painting that has had more fame than Malevich's Black Square, there is no work that has brought about so many other works," she said. The painting's influence is very diverse, even unexpected. Paradoxically, in the influence is felt less than it is in the West.

Admirers and followers of Black Square

Black Square, which the artist characterized as a "lively, regal youth," was supposed to produce an effect not its aspect but also with its meaning. It was a magical potion that helped liberate viewers from the "disease" of old art. This is how many artists perceived the work, including artists who did not intend to follow Malevich's aesthetic directly.

While we can say that artists such as the 50s-60s American minimalists Carl Andre and Donald Judd borrowed much from Suprematist principles, the French action painter Yves Klein and American Mark Rothko have nothing in common with Malevich's airy geometry. Nevertheless, the latter two painters often talked about Russian abstractionism as a major reference point.

The Suprematists' declaratory refusal of "graphic frills" can be considered a prologue for conceptualism.

The apotheosis of Black Square's influence on designers and architects came 10 years after WWII. Many of them, thanks to Suprematism, understood geometry not as a formal professional technique but as a philosophy of space. In one way or another this philosophy can be felt in the works of Brazilian architect Oscar Niemeyer, American architect Daniel Libeskind, Italian architect Renzo Piano (who built the New York Times Building), French designer Philippe Starck and American industrial designer Karim Rashid.

Another internationally acclaimed architect, Zaha Hadid, has often confessed publically her passion for Malevich's art. In particular, she once wrote in the British Royal Academy of Arts Magazine: "I had found the traditional system of architectural drawing exhausted. Studying Malevich helped me transform abstraction into an investigative principle." It is not by chance that in her personal exhibition, which recently opened at the State Hermitage Museum in St. Petersburg, one of the versions of the famous BlackSquare is seen as an epigraph.