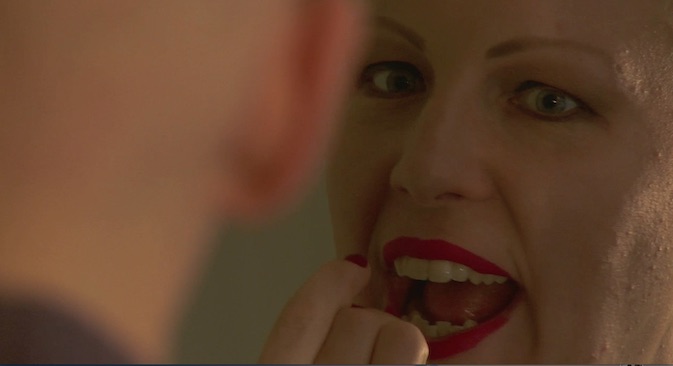 A handicapped actress gets ready for the show in this still from "Two and Twenty Troubles."

Young documentary filmmakers from Russia are increasingly choosing to get a professional education in the United States. Many of them remain in the country after graduation and make their films there – films that, whether they focus on Americans or Russians, always have a distinctly Russian touch. RBTH met three of them and listened to their stories.

Regina Gluckman, a cheerful and active old lady of 93, sits in her New York apartment, telling her daughter stories from her pre-war past and showing pictures from an old photo album. Here she is with her father and her little brother, young and beautiful. "Back then, when I was a child, I did everything boys did – but just better than them," she smiles.

She has never told these stories to anyone, but now, as she is approaching the end of her life, music therapy, and specifically songs in her native Yiddish, have stirred long-lost memories and given her daughter an opportunity to record those memories.

The story of Gluckman and her daughter is captured in a documentary by a young Russian director, Olga Lvoff, called When People Die They Sing Songs. In 2014, it was nominated for a 2014 Student Academy Award and received a number of prizes, including the 2014 CINE Golden Eagle Award. The film was also shown at fifteen documentary film festivals.

Olga Lvoff graduated from the School of Journalism at Moscow State University, but already in her final years there she realized that she wanted to make documentaries and went to study at the New York School of Visual Arts, where she got a master’s degree in Fine Arts and Social Documentary.

“There are wonderful documentary makers in Russia but there is no industry. That world is very small and revolves around several groups of people,” explained Lvoff –whereas New York, she added, is the center of the documentary making world.

Two and twenty troubles, or a tale of how to overcome

Viktor Ilyukhin graduated from the School of Visual Arts a year after Lvoff (at Moscow State University’s School of Journalism they were in the same year) and his works too have already received recognition and awards in the U.S. In particular, his film Two and Twenty Troubles, which tells the story of disabled actors working at Nicu’s Spoon Theater as they overcome their lack of self-confidence while working on a production of Anton Chekhov’s Cherry Orchard.

“The film is about the idea of overcoming physical limitations through art,” said Ilyukhin. After two weeks of shooting, Ilyukhin completely forgot that the actors had any disability. “We were just talking about life, about how it has changed. It was a revelation to me how many ways they find to express their acting ability,” he said.

Unlike Lvoff and Ilyukhin, Georgy Molodtsov completed his professional training in Russia before he went to the U.S.: in 2008, he graduated from the prestigious Gerasimov Institute of Cinematography (VGIK). Furthermore, straight after graduation Molodtsov was appointed to the team of professionals selecting films for the Moscow International Film Festival, building on his extensive experience of working in European countries and his track record in organizing an international festival during his years at VGIK.

In 2015, he received a master’s degree in Films and Media from the School of Communication at the American University in Washington. Despite his considerable experience in making and producing films, Molodtsov is insistent that his American education was far from a waste of time. “If VGIK offers an outstanding education in the philosophical and artistic appreciation of cinema, teaching you to understand its depth and different aspects, here we were instructed how to do it inside the industry. I was really impressed by how systemic all the processes are,” he said.

The animated social ad he made to promote a service that makes it possible to refill a drinking water bottle in 500 locations in Washington, D.C. received the university’s Vision Award.

Yet Molodtsov’s main American project is an as-yet unreleased documentary about Anton Buslov, a journalist and expert in urban planning who died in August 2014 in New York after a lengthy struggle with cancer. Buslov, who was a popular blogger, chronicled his illness, Hodgkin’s lymphoma, and the treatment he was receiving in Russia and the U.S.

“It will be a very intense film about a person who nearly died five times but managed to delay his death, gaining time to digitalize his knowledge, which will soon be published in two books, and inspiring thousands of people not to be afraid of speaking about cancer,” said Molodtsov.

Both Viktor Ilyukhin and Olga Lvoff managed to raise money to make and promote their films through crowdfunding on the Indiegogo website. For Two and Twenty Troubles, some of the money came from the New York Department of Culture and the Puffin Foundation. When People Die They Sing Songs was also partly financed by the Leonid Blavatnik foundation. Both admit that raising money for one’s films is not easy. “One has to balance between paid work and one’s own, independent projects that no-one pays you any money for. It is a lifelong problem and gradually one has to learn to resolve it,” said Lvoff.

All three have ambitious plans for the future. Ilyukhin is working on several environment-related projects both in Russia and the U.S. Lvoff is completing a script for a documentary about New Year’s Eve celebrations in different parts of the world and plans to continue living and working in the U.S. Molodtsov is in Russia, experimenting with virtual reality glasses in his documentary-cum-social project VRability, which in theory could enable people with disabilities to experience the joy of sporting competitions or other virtual activities.

“Making a documentary is always an adrenalin rush. You have to be constantly and fully immersed. You are trying not to miss anything from your protagonists’ lives because in the end you simply do not know what will happen. You have to capture everything,” said Ilyukhin.

Success in the U.S.: How 3 young Soviet-born entrepreneurs made it