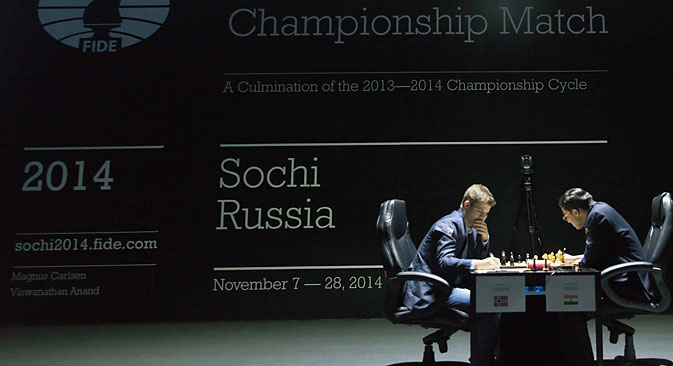 As the country marks International Chess Day on July 20, RIR looks at the facilities for the intellectual game in cities such as Sochi, Khanty-Mansiysk and Elista.

It has been almost one and a half years since the Winter Olympics ended in Sochi. Around 400 Olympic facilities were built in the city and its surrounding areas for the games. Since the Olympics ended, many of these facilities continue being used to host sporting events. The Olympic Media Center became a venue for one of the most significant events of the chess world in 2014. Last November, a match to decide the World Champion was held here between Magnus Carlsen and Viswanathan Anand. According to the organizers, this match was held at a highly technical level, being broadcast over the Internet, so that chess fans from all over the world could follow the proceedings, online and live.

In March-April 2015, another major event came to Sochi, the Women’s World Championship, where in the finals, the Ukrainian Mariya Muzychuk defeated Russian Natalia Pogonina. Despite the current difficulties in Ukrainian-Russian relations, Muzychuk spoke warmly about the level of organization of the match. “I would like to thank the FIDE, the city of Sochi, the Russian Chess Federation, the organizers of this tournament,” she said, according to TASS. “I was even rather taken off-guard on how everything went so well when the tournament started.”

In a conversation with RIR, the Executive Director of the Krasnodar Regional Chess Federation, International Grandmaster Sergey Nadyrhanov noted that large-scale chess events are just the tip of the iceberg in the Krasnodar Territory. “Major tournaments and championships are mainly organized by the Ministry of Sports,” Nadyrhanov said. “Whereas, we work with ordinary people, organizing tournaments not only in cities, but also in towns, villages, and Cossack settlements.”

While Sochi has become the center of major tournaments in recent years, the city of Khanty-Mansiysk in Western Siberia has, for several years, played host to important chess matches. For several years in a row, it hosted the World Chess Cup (the last time in 2011), and in 2010, the Chess Olympiad.

Kirill Zangalis, PR-Director of the Russian Chess Federation, Khanty-Mansiysk can be considered as the Chess Capital of Russia. “It regularly hosts competitions for children and youth, the Chess Academy is located there, which is perhaps the most beautiful building in the world dedicated to chess,” Zangalis told RIR. The Ugra Chess Academy first opened in 2010. The building was designed by Dutch architect Erick van Egeraat. The choice of Khanty-Mansiysk was not accidental. The city’s mayor, Vasily Filipenko is a big fan of this ancient game.

Elista and the City of Chess

An even more striking example of how the preferences of the authorities have determined the development of a region is the city of Elista, capital of the Republic of Kalmykia, on the border of the Volga Region and the North Caucasus. From 1993 to 2010, the republic was led by Kirsan Ilyumzhinov, who is not only one of the top chess enthusiasts in Russia, but since 1995, also the president of the International Chess Federation (FIDE).

In 1998, Elista became the host of the Chess Olympiad. For this event, the city built the City-Chess Complex, a facility totally dedicated to chess. In addition to the luxurious Chess Palace, which hosts the Olympiad matches, there is also the Chess Hall of Fame, home to the personal collection of the outstanding Soviet chess master Mikhail Tal. After the death of the Grandmaster, Ilyumzhinov bought his entire library and donated it to the museum.

Kirill Zangalis told RIR that the federation is actively working on popularizing chess in the country. “Since 2012, we have been regularly holding matches in major museums, such as the Tretyakov Gallery,” Zangalis said. “When the Women’s World Championship matches in Sochi were webcast, instead of advertising, we showed pictures from an exhibition titled the Second World War in the Works of Russian Artists.”