14 countries to participate in military band festival on Red Square 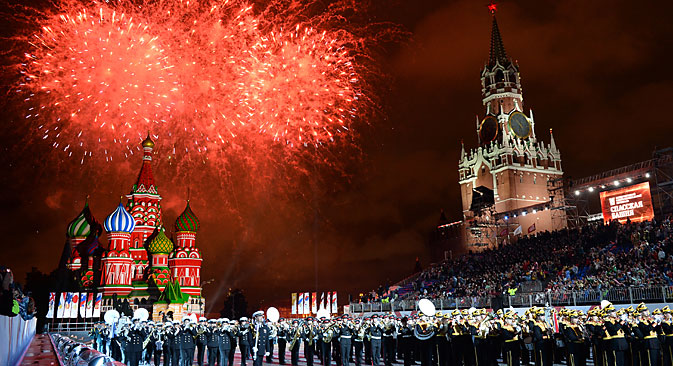 This year’s Spasskaya Tower festival will be dedicated to 70th anniversary of WWII victory.

Twenty-six bands have confirmed their participation in this year’s Spasskaya Tower festival, an annual celebration of martial music that takes place on Moscow’s Red Square.

Bands from 14 countries, including Britain, Greece, Italy, China and Japan, have confirmed their participation in the festival, which will be held in Moscow between 5 and 13 September and dedicated to the 70th anniversary of the allied victory over Nazi Germany in 1945.

“For nine nights, the viewers and guests of the military music event will witness a bright and colorful spectacle, consisting of performances by the best Russian and foreign military bands with theatrical elements, light installations, a grand finale and fireworks. A total of 26 bands from 14 countries have confirmed their participation in the Spasskaya Tower festival,” the event’s organizers announced on July 20.

The guests of the festival will see performances by the Band of the Armed Forces of Belarus, the Royal Stiltwalkers from Belgium, the Brentwood Imperial Youth Band from the UK, the Municipal Police Band of Rome from Italy, the Hellenic Air Force Band and Technical NCO's Academy Drill Team from Greece, Le Cheile Sa Cheol Massed Pipes and Drums from Ireland, army bands from China, Mexico and Pakistan as well as a folk group from Japan, Kanto Matsuri.

The Spasskaya Tower International Military Music Festival has been held on Red Square since 2007 by presidential decree.