Surf’s up: Where and when to catch a wave in Russia 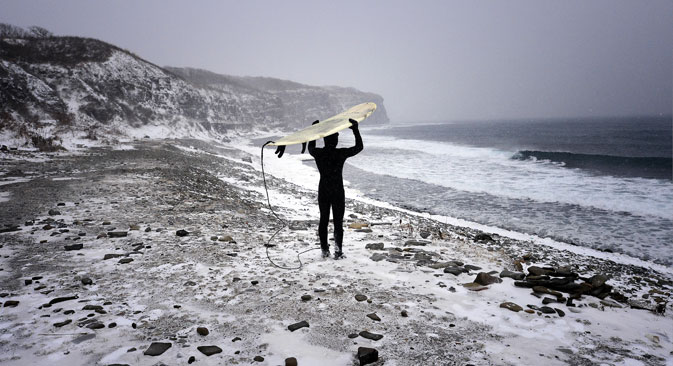 A man with his surfboard walking along the Ussuri Bay coast on Russky Island, Dec. 21, 2014. Source: Yuri Smityuk/TASS

Mention Russia as a potential surfing destination and you are bound to attract some strange looks – after all, it’s not exactly Hawaii. Yet while the waves are not always the highest, there are in fact a number of areas where surfing is possible, and a growing community of devoted surfers is developing in the country. But where are the best surf spots in Russia? Professional surfers Anastasia Timarevskaya and Sergei Rasshivayev talk about where to go and what can be expected.

“Kaliningrad is almost California,” said Anastasia Timarevskaya, head of the Russian Surfing Community project and a participant in the national surfing championship,.

Water that is quite warm – by Russian standards, good surf schools, a developed infrastructure, sandy beaches and a decent pier make Kaliningrad an excellent location for surfing.

For beginners, the season here starts in the summer, when the temperature of the water is about 20 degrees Celsius. Serious waves can be found here in the fall and are more suitable for experienced surfers.

“It is a region close to Europe, at the same time the prices are quite affordable here,” said Russian surfing champion Sergei Rasshivayev. This is especially the case for surfers from Moscow and St. Petersburg since it is practically always possible to find reasonably priced flights from those cities.

According to professional surfers, the best spots in the Kaliningrad Region include the resort towns of Pionersky and Zelenogradsk. From August 1-21, the region will host the third stage of the Russian surfing championship.

The waves here are unreliable and you have to check the weather forecast all the time. On the plus side is the ease with which the location can be reached and the fact that, if you are lucky, waves here can be as high as four meters.

“Surfing in St. Petersburg is quite hard, I would even say it is a separate sport,” said Anastasia Timarevskaya. “It requires nearly light-speed reactions. Sometimes you have to wait for a wave for 20 minutes. You even begin to doubt if there are ever any waves there. And then, suddenly here it is! And you ride it.”

High season here lasts from June to October. However, in practice local surfers go out surfing until the Gulf of Finland and Lake Ladoga are covered in ice.

The key locations for St. Petersburg’s surfers are spots in the settlement of Solnechnoye (Atlantis and Cape Flotsky) on the Gulf of Finland and the Mayak spot on Lake Ladoga.

“Kamchatka cannot be compared to anything. It is a completely unique world,” said Timarevskaya. “There are real world-class ocean waves there.”

Kamchatka is a unique combination of volcanoes, the ocean and snow. The main place for surfing is the vast Khalaktyrsky beach, some 30 km (20 miles) long. In addition to excellent waves, the beach offers quite a few other interesting things, including the famous black volcanic sand and several volcanoes. And of course stunning sunrises.

Professionals surf here not only in summer, but in winter too, when the whole peninsula is covered with snow. Russian surfers even made a video about it, which became something of a global online hit.

SURF IN SIBERIA ZIMA 1 from Kokorev Konstantin on Vimeo.

“Those who have heard of surfing in Russia, immediately think of Kamchatka. Which is absolutely right,” said Sergei Rasshivayev. “Although there can be excellent waves on the seas, it’s in Kamchatka that you can surf every day. In addition to the quality of the waves, it also offers the most stable conditions.”

In Vladivostok, there are several spots right in the city and several more on nearby islands. The season for beginners opens in spring, and throughout the summer the weather here is warm. Professionals, just like everywhere in Russia, go out surfing here all year round, closely following the waves forecast.

For Rasshivayev, surfing in Russia has its own particular character. “When you surf in the north, the first thing you feel is the joy of a new experience, of it being different from what you are used to. There are no palms around, only fir trees. You are dressed not in shorts but in a wet suit. It is a departure from stereotypes,” he said.

According to the professionals, cold water is nothing to be afraid of because modern wetsuits are very good at retaining heat, with some even fitted with an internal heating system.

Although the Black Sea coast is relatively easy to reach, there are no surf schools for beginners here, so this location is better suited for experienced surfers who have their own gear.

Experienced surfers say that in Sochi, which has for several seasons been very popular with Russian tourists, it is possible to catch waves similar to ocean ones. In Anapa, for example, in addition to surfing, you can also try windsurfing and kiting. There are good waves also to be found in stormy weather in Crimea.

Good spots in the area can be found in Khosta-Rika, Lazarevskoye, and Ashe. The season here lasts from October till March, when the sea is rough.

Interestingly, it is here that professionals coming to these spots in winter try to combine two seemingly incompatible pursuits: surfing and snowboarding. 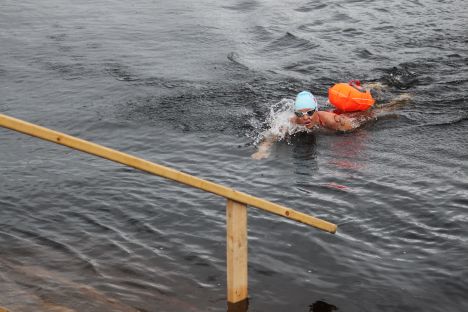