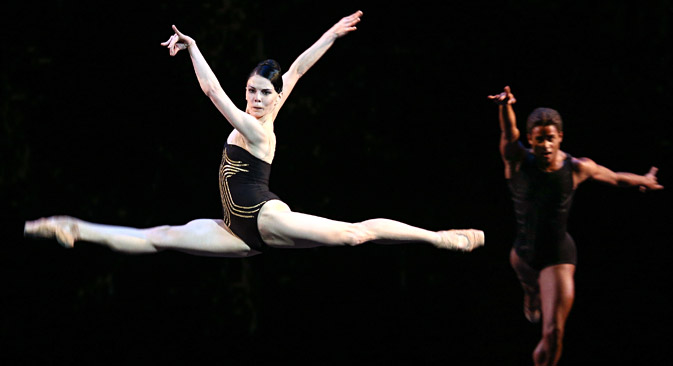 Natalia Osipova is currently the biggest sensation in today's ballet world. Four years ago she left the Bolshoi Theater, which she felt was rather limiting, and embraced the opportunities of being an independent touring star.

Now Natalia Osipova is celebrating her 10th professional year with a new status: She spent the current season as the prima ballerina at the Royal Ballet in London, and next season she will be back at the Bolshoi as a guest soloist. Osipova sat down to talk to RBTH about the changes in her career.

RBTH: Ten years is the official midpoint of a ballerina's career. For you is this ‘an entire 10 years’ or ‘just 10 years?’

Natalia Osipova: I have this feeling that I started dancing only recently. But when I look back to see how much I've done, it seems a lot. I was sitting around the other day, unhappy with some of my performances and decided to have a look at my old video recordings. I thought: "Not bad. Many things were done well."

But I've felt that I need to perform works that I want, not those that the theater imposes on you. I now have a circle of my own professional interests: certain ballets, choreographers, partners. So I'm looking for opportunities to realize my own projects.

RBTH: The ballet world is very diverse. How do you choose what is interesting for you?

N.O.: There are old ballets, roles that one wants to perform or perfect. And there are ballets which have been performed many times and therefore it's a pity dedicating yourself to them again since your body already hurts and you don't want to torment it with roles that are not that important.

I want to have time to do big, powerful, artistic things, which is why my last season was fantastic. I was able to do a lot.

RBTH: You spent practically the entire season in London at the Royal Ballet. From the spectator's viewpoint it was the most unexpected choice that you could have made: your grand manner of dancing, your emotional profusion, your desire to stand out from the rest – this is all contrary to the style of the London troupe. Why did you choose the Royal Ballet?

N.O.: From my point of view, too. Before, I had thought a lot about London, about how much I like the city, how I would like to live there. But I never associated myself with that troupe, which has its own, clearly expressed characteristic, its own style. I didn’t think of experimenting with that repertoire. I thought that I would never dance English ballets, that they don’t suit me!

But two years ago Kevin O'Hara, the director of the Royal Ballet, invited me to dance Swan Lake. I agreed and spent almost two months with the troupe rehearsing the ballet. At that time we were also working on a piece with Wayne McGregor, who suggested that Edward Watson and I dance in a concert in honor of the Queen's diamond wedding anniversary. Thus it happened that for some time I was part of the group. It was really good, I felt comfortable there. I felt that they were interested in me, that I was able to dance McGregor's piece and that Swan Lake came out really well. And right after the McGregor invited me to work with them.

At that moment I had been accustomed to leading a rather free lifestyle, which is unusual for a ballerina: traveling throughout the world, receiving temporary contracts, not having a permanent home. But as a woman, as a person, I started feeling that it was all tiring me out. But I didn't know how to stop, how to find the lifestyle that would combine creativity with a permanent home. Kevin's invitation came at the right moment and I understood that it was a rare chance, that I needed to try it. So I agreed, almost immediately.

Of I was very afraid how I would be received. I was afraid that they would think I don’t know how to do anything because I'm Russian. But now I can say that I found a group, people, a theater, a family, partners, all who gave my career a new direction. I started dancing ballets that I would have never danced in Russia or the U.S. Perhaps this was one of the most important decisions I ever made.

RBTH: How would you characterize the style that you devoted this season to mastering? How difficult was it for you?

N.O.: This is very difficult. If we were to compare the English style to Russian style I would say that the first is more delicate. It is distinguished especially in the artistic element. It's fascinating that ballet master Frederick Ashton's ballets [Ashton headed the Royal Ballet between 1963 and 1970 – RBTH], such as A Month In The Country, The Dream, La fille mal gardée, which I danced, all trace and elaborate the artistic aspect for the dancer, the mise-en-scenes are already constructed there. The performer is not required to invent anything. He or she just needs to enliven the role, add his or her feeling to it. And I like this a lot.

It was very difficult to learn the right movements. Of course, I can't be like the English ballerinas – I come from a different school. But I try a lot and they help me. Perhaps I don't always dance in their style, but ballet masters tell me that what happens is an interesting mix, that with my Russian school, which is more open, I create an interesting contrast.

RBTH: Next season you are returning to the Bolshoi with your most famous role, Giselle, but also with Onegin, choreographed by John Cranko, which you performed this year in London.

N.O.: I've dreamed of dancing Onegin for a long time [she will perform on Oct. 15 at the Bolshoi]. I wasn't able to do it at the American Ballet Theater. I was afraid that now the dream wouldn't come true because I started rehearsing it after an injury and there was little time. But everything went well and I performed the role that I had dreamed of most of all. I think that it is one of my best artistic works and it my main achievement in London.