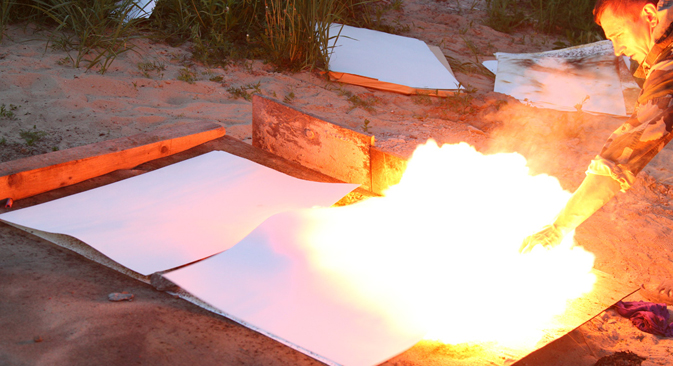 An exhibition 'War in the eyes of children' opens in the UK on Aug. 21

War in the eyes of children an exhibition by Russian-born artist Dina Mackins, who lives and works in Scotland, will be on display Aug. 21-30 as part of the Masters Show of the MFA Art and Humanities program of Dundee University's Duncan of Jordanstone College of Art and Design.

Mackins is the first artist in Europe to create her drawings with the help of munitions. The project commemorates the 70th anniversary of the end of World War Two and reflects on the similarities between past and current conflicts.

“Each drawing is dedicated to those who experienced war, and it is inspired by the use of archival photos, which show evacuations of children in Russia and Britain during WWII”, said Mackins.

Mackins used more than 35kg (77 lbs) of gunpowder to create her images, remarking that "it's enough to blow up a small city."

She adds: "My works are created for humanitarian purposes and I wish gunpowder was tool for artists rather than a weapon." 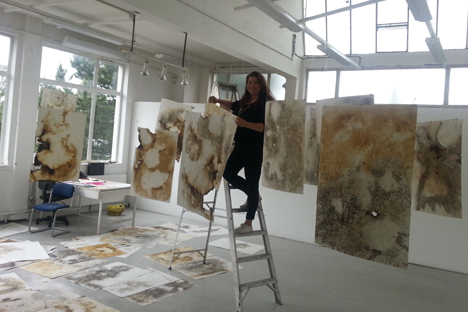 For many of her drawings Mackins has collaborated with Russian and British ex-service personnel with experience of international conflicts. Through this she aspires to demonstrate that servicemen from different countries want peace.

Gunpowder is a dangerous material, requiring special permission for it’s use and Mackins had to seek support from Russia's emergency network EMERCOM to prepare her drawings.

The process of drawing is spectacular and astonishing. To get the necessary effect, the artist first applies her own handmade organic ink to the paper then arranges the gunpowder before setting off a controlled explosion that results in a big bang - and her finished artwork. 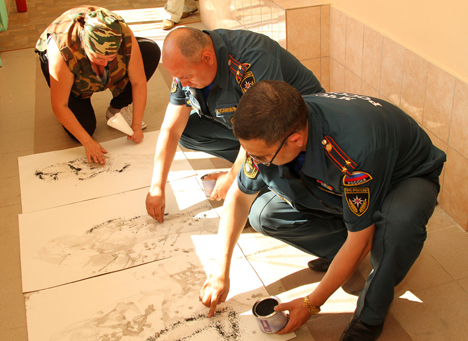 To achieve a specific result from the somewhat random process of using explosives, Mackins has to discard many attempts and start afresh. Each canvas is unique and the artistic effect depends not only on the sort of gunpowder and ink formula, but also on the prevailing weather conditions – as most of the creative process inevitably takes place outside.

Mackins feels that gunpowder is the ideal medium when depicting the devastating consequences of war and the essential fragility of the world.

Mackins also suffers from partial loss of eyesight, which served as another incentive for coming up with a new artistic language.

After the presentation in Dundee, Mackins is preparing another exhibition in Russia at the Tatarstan Museum of Contemporary Art, which will be held from September to October. During the summer of 2016 Mackins plans to travel to Russia to create even more ambitious large-scale humanitarian gunpowder drawings in collaboration with the Russian Military of Defense. This work will be hosted a major Moscow state gallery, The Museum of the Great Patriotic War.

“To prepare for that project I am planning to work in the military archives in Moscow and St. Petersburg, I want also to film the creation of the artworks at military training camps in the Moscow region,” Mackins said.

The opening of the Masters Show (War in the eyes of children) at 13 Perth Road, Dundee, is at 7pm on Aug. 21. Entrance is free.