Who needs Domino’s when you can have Soviet pizza 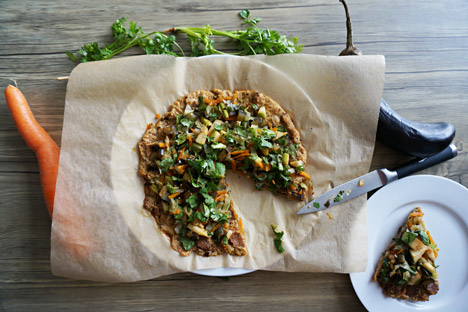 In The Book of Healthy and Tasty Food, pizza is a healthy recipe, for people with liver troubles.

“I found a good recipe for you – it’s the prototype of pizza – a Soviet one! You could make it for breakfast” – Granny said. I couldn’t resist the urge to try it.

The “pizza” was listed in the healthy recipes section of the Book, recommended for people suffering from liver problems. Red lights started flashing in my mind right away —  the healthy recipes in the book are particularly weird — but I had to satisfy my curiosity. Plus, my liver could probably use some loving care.

The base of the pizza is whole grain bread soaked in milk and eggs – I can live with that – but with sugar! The topping is stewed cabbage, carrots and zucchini – again, fine – but mixed with fresh apples and lettuce. I generally have no issues with fresh lettuce, but the instructions to bake it threw me off a little – I just wasn’t sure how to make sure it was baked through.

The result was better than expected – my husband and I were hungry enough so we ate it all, and found it to be odd, but healthy and edible. I doubt we’ll be looking for Soviet pizza in our next Domino’s order though.

I quizzed my grandmother about her thoughts on pizza — she claims to have tried it and found it “not great” — but I’m having a hard time trying to picture her with a pizza in her hands. In the Soviet days, she says, “we weren’t that interested in foreign cuisines. We had enough of our own: Russian, Georgian, Jewish, Siberian. And for pizza – we didn’t even really have cheese to make it with. We heard that in France they have many types of cheese, and the first people to travel abroad were stunned by the choice. We had three types of cheese plus a melted variety, which was very popular. The only nice type of cheese was called Swiss, it was very nice and very expensive – whether that was a name or it actually came from Switzerland, I don’t know.”

Granny has very much grown to be fond of French cheese – coming home to Moscow from Tbilisi I brought a slab of blue cheese back, along with tomatoes, cucumber and walnuts. It also made her reminisce about the first she tried “French” cheese:

“There was a small dairy factory in Old Russia where they made very popular melted cheese. Once I came in and saw they had Roquefort or Camembert – I don’t recall exactly – in small round boxes. It was the first time I’d seen cheese like that. The lady at the shop told us the factory made French-style cheese for export, but if a batch had defects in it, it would be sold for the locals at the shop. You know that many factories in the USSR used to make very high quality products for export, the sort of products we never saw in shops, unless they were special closed ones. The few tourists that traveled to the West would buy Soviet-made products there, because the quality was much higher compared to what was produced for the local market,” Granny said.

It’s no wonder there has always been an admiration for anything imported in Russia – the famous lines to eat at the first McDonalds are just one example. A friend of Granny’s says she first tried pizza in the early 1970s – they made it in a very chic famous restaurant on Novy Arbat  — the road that was built to carry Soviet officials straight to the Kremlin. I can imagine then what a huge deal it would have been to try something foreign, even if you didn’t think much of it.

But even with Granny’s weakness for French cheese (which has only grown stronger since Russia banned the import of foreign foods a year ago) Australian vegemite and macadamia nuts and Italian chocolate, she will take apple oladyi over pizza any day – I’m with her on that one, especially if the pizza is a Soviet one! 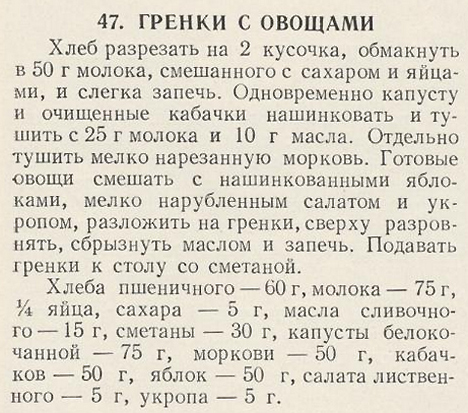 The recipe from the Soviet Cook Book, page 354

Cut bread into two pieces. Soak in 50 grams of milk mixed with egg and sugar.

When cooked, lay cabbage, zucchini and carrot slices on top of the bread.

Lay apple slices, lettuce and dill on that. Drizzle with butter and bake. Serve with sour cream. 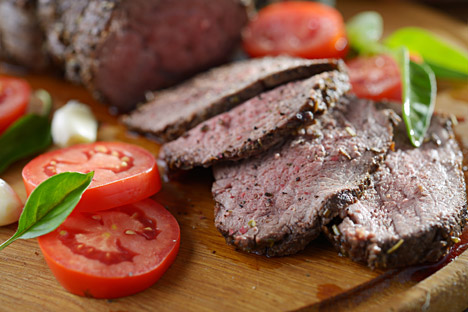