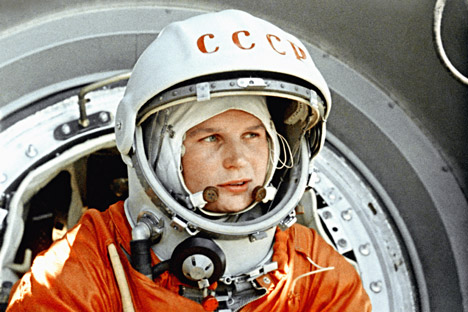 In the biggest exhibition of Soviet space artefacts ever seen outside Russia, London's Science Museum has launched a unique new display.

“Cosmonauts: Birth of the Space Age” contains many objects that have never previously left Russia, including a lunar lander five meters high and equipment from the space station. Record numbers of people are expected to visit the show before it closes in March next year and, in an unprecedented move to ensure no one misses out, the museum has introduced late entry on Fridays until 10pm.

In the third hall of the dramatic exhibition is the actual spacecraft, the battered Vostok 6 descent module from 1963, in which Valentina Tereshkova orbited earth for nearly three days, becoming the first woman in space. Tereshkova, now 78, was at the museum for the exhibition’s launch looking proudly authoritative next to the rusting, scorch-marked sphere that helped her to make history.

“Every time I see it, I stroke it and say ‘my best and most beautiful friend’,” she said. Today, she is still the only woman to have piloted a solo space mission; Mary Archer, chair of the Science Museum Group, calls her “a legend in her own lifetime.”

Selected from a shortlist of five, Tereshkova was an expert parachutist before joining the space program. When the rocket launched, Tereshkova shouted: “Hey, sky, take your hat off! I’m coming to see you!” During her mission, she orbited the Earth 48 times. As the descent module hurtled back through the atmosphere at 17,000 miles per hour, its outer shell charred and blistered. Her early skydiving experience was vital as she parachuted out of her capsule five miles above earth.

Tereshkova has not been the museum’s only celebrity guest. Sergei Krikalev, who flew into space six times, was at the opening alongside Tereshkova. Krikalev has spent a cumulative total of 803 days in orbit and was on the space station in 1991 when the Soviet Union collapsed. “Our ground control kept working,” he recalls. “I think our operations in space were more stable than what was happening down on earth.”

American lunar astronaut Buzz Aldrin and Alexei Leonov, who became the first man to walk in space in 1965, also visited the museum earlier this year.

Some of the items have personal histories - designer Sergei Korolev’s glove, cosmonaut Vladimir Komarov’s woolly hat and Helen Sharman’s space suit. A shower, fridge and toilet from the Mir station are on display. Tereshkova mentions drily that the equipment provided on her mission did not include a toothbrush. “Luckily I am very resourceful,” she says sternly, “as any woman would be.”

Elsewhere in the exhibition, an orange-suited mannequin in a Vostok ejector seat is tensed at an expectant angle behind a navigation console with multiple dials and a rotating globe. A model of the Venus lander and parachute hangs near lunar probes and the earliest image of the far side of the moon.

The exhibition explains Russia’s driving role in the global space age, charting pioneering discoveries from the 19th century onwards, that eventually made it possible to send human beings into space. Besides mindboggling historical exhibits, like a dog ejector seat or lunar roving vehicle, there are displays of posters, photographs and documents.

While less immediately compelling than the physical objects, this paper record of the last century’s achievements is equally fascinating. There is a page from the notebook of groundbreaking theoretician, Konstantin Tsiolkovsky and posters that celebrate the Soviet space program.

Science Museum director, Ian Blatchford, explains that they want to convey the atmosphere of these early days: “it’s difficult for people now to imagine how sensational Sputnik was,” he says. His favorite celebratory item is a Sputnik-shaped samovar. Leonov’s self-portrait, in orbit above the Black Sea, is also on show and conveys a powerful sense of humanity’s cosmic achievements.

Tsiolkovsky sketched pencil figures in 1933 that predicted spacewalks, weightlessness and life in orbit three decades before they were actually possible. “He laid the foundations in terms of dreaming about space,” says Blatchford, “but also in terms of science.”

Most of these exhibits have never previously been seen outside Russia and some were declassified specifically for this exhibition. The 150 objects have been borrowed from 18 different collections. The museum director describes the show as “a once-in-a-lifetime exhibition that has taken years of dedication and skill … to make a reality”. His staff collaborated with Russian Exhibition Centre ROSIZO and Space Agency, Roscosmos.

Tereshkova says she has always been motivated by a desire for global cooperation: “I belonged to the generation of war children; we dreamed of peace.” She is delighted at the level of interest the show is generating in London and the links it fosters between British and Russian scientists: “such exhibitions enable them to meet more often,” she says. After a morning in the museum, she and Blatchford are already cheerfully planning to go into space together as “proof of Russo-British cooperation!”

Blatchford takes a controversial view of the space race, claiming that the first nation on the moon was actually Russia, whose unmanned Lunar 9 landed there in 1966 - three years before Neil Armstrong became the first man to walk on the moon. The exhibition seeks to celebrate achievements like this that have not been fully appreciated over the intervening decades. Blatchford calls the Russian space program “one of the great intellectual, scientific and engineering successes of the 20th century.”

The exhibition will run until March 13, 2016. For tickets and further details, visit sciencemuseum.org.uk/cosmonauts. 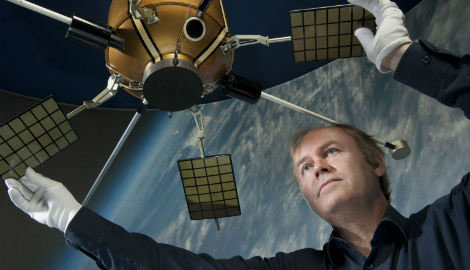