When ‘Katya and the Prince of Siam’ hit the ballet stage 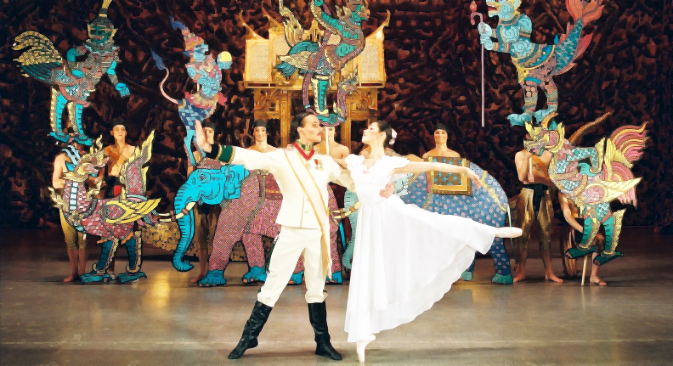 The Kremlin Ballet Theatre, St Petersburg State Symphony Orchestra, The Moscow Stanislavsky Ballet and the Mariinsky Theatre perform the tale of love between the Russian girl Katya Desnitskaya and the Prince of Siam on stage. Source: Press photo

A novel about a Thai prince and a Russian girl was adapted for the stage as a ballet. It received wide critical acclaim in Bangkok.

Over the last 17 years, Bangkok’s International Festival of Dance and Music has featured performances from famous Russian institutions such as The Kremlin Ballet Theatre, St Petersburg State Symphony Orchestra, The Moscow Stanislavsky Ballet and the Mariinsky Theatre. But the festival’s organisers say one performance stands out among the lot - the 2003 staging of the ballet ‘Katya and the Prince of Siam’ based on the book by the same name, written by Eileen Hunter with M.R. Narissa Chakrabongse.

Russian composer Pavel Ovsyannikov was commissioned to write the music for the ballet. Ovsyannikov was at that time the artistic director and chief conductor of the President's Orchestra of the Russian Federation. Andrey Petrov, artistic director of the Kremlin Ballet was asked to produce and choreograph the ballet, while Olga Polyanskaya designed the costumes and Vladimir Arefiev, chief designer of the Stanislavsky Theatre created the sets and decorations.

The team visited Bangkok several times absorbing Thai culture, visiting temples, museums and attending Thai classical music concerts to understand the mood that that had to be conveyed.

The ballet by the Kremlin Ballet Theatre with the Presidential Orchestra of Russia saw its world premiere in Bangkok to critical acclaim under the baton of conductor Robert Luther. The premiere was attended by Princess Maha Chakri Sirindhorn and Princess Galayani Vadhana.

Petrov said he found the experience “very creatively absorbing.”  He had first encountered Thai culture when the Kremlin Ballet Theatre was invited to take part in Bangkok's 4th International Festival of Dance and Music. It was at that time that J. S. Uberoi, chairman of the festival committee, mentioned the tale of Katya and the Prince of Siam to Petrov.

The ballet ‘Katya and the Prince of Siam’ based on the book by the same name, written by Eileen Hunter with M.R. Narissa Chakrabongse. Source: Press photo

The artistic director of the Kremlin Ballet then believed that there was a story waiting to be told. The colours, culture and history of Thailand had left a lasting impression on him and all of that were distilled into Petrov's vision of the love story, which is not a historical or biographical account.

“As the story of the ballet moves in the second part to Thailand or Siam, Pavel had to study Thai music and adapt it to a classical symphony orchestra,” says Uberoi, who is also the chairman of the Media Transasia Group. “Even the costumes go from European in the first act to ‘Thai inspired’ in the second.  Not easy to do but Olga Polyanskaya, the ballet's costume designer did a brilliant job.” He adds that some elements of Thai dance were also incorporated into the second act.

The ballet now has a new version that was produced and staged by The Yekaterinburg Ballet Theatre. This version, which has been staged over 15 times in the past two years, may be a part of the celebration of 120 years of Russian-Thai Diplomatic Relations in 2017 in Bangkok.