Woman metallurgists, postal ordeals and a tax on theater performances 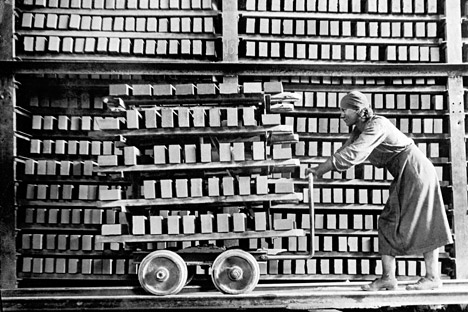 A woman at the plant.

Fotosoyuz/Vostock-Photo
RBTH turns the clock back a century and shines a light on the now-forgotten stories being reported on the inside pages of Russian newspapers in 1915 and the events and processes occupying the minds of the Russians of the age. Travel back in time with us week by week for a sense of what life was like in the twilight days of the Russian Empire.

The woman as factory worker

With each passing day, the use of female labor increases in industries that were previously considered inaccessible to the "weaker sex." The capital's factories apart, over 500 women work at the Taganrog Metallurgical Plant, with women being assigned not only to lighter work, but also to such work as the unloading of wagons of coal and other commodities. Moreover, in terms of productivity, women's work in many ways is not inferior to male labor and as noted by the masters is much more efficient than the labor of prisoners of war, 275 of whom are stationed at the plant and another 100 of whom are expected to arrive.

No vodka to be sold

The recent media reports about the resumption of the sale of alcoholic beverages in the near future are not at all true, we were told by a very authoritative source. No plan to resume sales of vodka exists in government circles, and this issue has not even been raised.

On Wednesday, October 21, the Tagiyev Theater staged an either English or American farce called "My Baby."

The drama reviewer must admit that he cannot write a review of the farce, just because he laughed so hard along with the rest of the audience that he could not find the time to assess the play and the actors' performances properly.

All of this comes later, after the curtain fell, but while you are watching the play, you are entirely in the grip of the author's whim and laugh at the adventures of hapless Jimmy, who procures three infants for his friend, in succession, when she needs to convince her husband that she has had a "baby."

The Ministry of Finance has submitted for consideration by the Council of Ministers a plan to establish a special war tax on tickets for entrance to public spectacles and amusements.

The tax will be levied by the Office of Empress Maria in its interest.

The new building for the Central Post Office in Penza has been the talk of the town for the past 10 years, but the common man's dream has never been fulfilled. To visit the post office means to sustain an attack.

When you need to come to some window in the office, you are clenched from all sides. And, drowning in your own sweat and that of others, you can breathe a sigh of relief only in the street. Since the beginning of the war, when the number of post office visitors has increased, to conduct postal business is a real ordeal and blessed is he who has no need to go there.