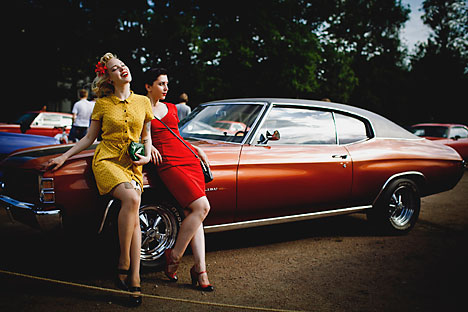 Press Photo
While public polls are showing a negative attitude toward Americans among ordinary Russians, from a lifestyle perspective, the influence of American pop culture is quite notable.

DeLorean cars, Doc Brown quotes and Photoshopped images of Marty McFly flooded Inernet users Oct. 21. Crowds gathered to greet time travelers Marty and Doc, set to arrive on this date in 2015, according to the American cult classic “Back to the Future” movies. The future was in full swing just as BTTF had imagined it, with one difference: the scene and its surrounding hubbub took place in Russia.

Weeks into this historic period of the future, one can’t help but think about the influence American culture has on Russian everyday life.

Even in the days of the Iron Curtain, people managed to hear illegal songs and learn about fashion and cultural trends via forbidden radio waves caught in secret in the middle of the night. But these days, with world media wide open to Russian users, there’s no lack of all things foreign. In fact, certain trends have grown so solidly into Russian life that they’re no less important to the current generation than Chekov or Tarkovsky.

Russians take to the streets over American film classic, `Back to the Future'

“Back to the Future” was never a thing of the past for Natasha Bezrukova, 36, who in 2012 managed to finagle two special guests for her son Seva’s seventh birthday. She posted an ad in a Moscow newspaper, asking for “a kind heart that would be able to gift the child an hour of delight,” as well as one specific detail. The result: not one but both owners of the two existing DeLoreans in Russia volunteered their cars for a birthday ride.

“There’s something in the movies of the ‘80-’90s, something true, something that makes you watch it again at an older age with your own kids,” Bezrukova said.

It was only when she decided to show Seva the things she liked as a child that Bezrukova discovered her own love for the series, she said.

“We saw the trilogy when Seva was six,” Bezrukova says. “To my surprise, he got the point of the time-space interconnection, got excited about time traveling, watched everything on YouTube on the topic.”

What Marty and Doc couldn’t foresee was how the past would become a fashion statement. Red lips, provocative poses, playful clothes – who would’ve thought that American pin-up, a popular 1940-50 trend, would make its way into contemporary Russia? And yet projects such as “Haunted Cathouse,” the first pin-up project in Russia, weave together the retro with the modern.

For Radmila, who is inspired by American models and photographers, artsy makeup is a daily must, as well as certain clothes and accessories. Source: Personal archives

Radmila “Rocky Zombie,” 26, discovered pin-up at 18 while searching for herself, her style and her way to femininity.

“Pin-up can’t but attract with its ‘sweetness,’ lovely color combinations, smiles and charm of the girls,” Radmila says. “When I saw modern American models with tattoos and colorful hair I thought ‘that’s my option,’ as I was an alternative girl at the time.”

A retro stylist, hairstylist, photographer and creator, Radmila and her team organize performances, lectures, and master classes and go to festivals and exhibitions.

Make-up from the past: Pin-up styles for modern women

“At first I never thought about business and money, but I thought straight away about world fame for my pin-up project,” Radmila says. “That’s what moves me still and what turned the project into profit.”

For Radmila, who is inspired by American models and photographers, artsy makeup is a daily must, as well as certain clothes and accessories.

“They’re real innovators in everything and are afraid of nothing, then and now. Our shoots go to American magazines or just into the web,” Radmila says. “Our clients are clothes stores, fashion brands, festivals, cafes and private individuals.”

The interest is growing day by day, and Radmila and her group are booked till Jan. 1, she says. The popularity of pin-up could be explained by the emerging fashion for femininity, something that hasn’t been emphasized since the ‘80s, Radmila says.

Another trend making a comeback: the cult of famous ‘90s TV shows such as “Sex in the City” and “Friends.”

Visit the Russian city of Perm, a city near the Ural Mountains 700 miles from Moscow, and you’ll find a recreation of the old “Central Perk” café set, a facsimile that has attracted visitors from all over Russia for four years.

Karina Alenina, 36, the creator of the café, says the series has become a solid part of her life, literally.

“It’s not just that I’m quoting it all the time and persuading people to watch it, but also the fact that my first daughter is named Emma, after Ross and Rachel’s daughter,” Alenina says. Alenina first saw “Friends” in 1995 as an exchange student in the U.S., at her host family’s home. She was hooked instantly.

“Later, I saw the series translated in Russian and started watching. At last I got all the jokes!” Alenina says. “The older I became, the more all the characters and plots got revealed from a new perspective.”

She adds, “I think this series has all the everyday life situations played out, which surely helps to look at one’s own problems in a different light, easier, with humor.” Alenina jumped at the chance to recreate a part of her favorite show, and so Perm’s “Central Perk” café was born, she says.

“We did it all by ourselves, from the famous red sofas, all the furniture and signs to the tiniest interior details,” Alenina says. “Joe’s famous sawed door became a toilet door at the last stage.” Raised watching the show, Alenina and her friends hold it in high regard.

“In Russia ‘Friends’ was one of the first American series translated into Russian, and that’s why a generation has grown up with it, capable of telling the quality,” Alenina says.

Alenina, Radmila and Bezrukova are not alone: from huge annual Comic Con events to a snug little café in Perm, American culture has become a part of daily life for many Russians, and for many, a part of their identity.

“It’s not that retro culture is so very popular, but people started recognizing it and distinguishing it,” Radmila says. “Maybe out of respect for the past or maybe because we’re so influenced by American fashion and trends.”

I wouldn't necessarily connect such hobbies with the extensive cultural expansion of the U.S. over the U.S.S.R in the 1980-'90s; the interest appeared earlier. We can recall during the 1950-'60s and movement of the Stilyagi (Hipsters) in the Soviet Union, who liked jazz, boogie-woogie and rock’-n’-roll.

Besides, I would pay attention to the fact, that in the U.S. it is possible to meet the people who are fond of Russian culture. They aren’t only collecting works of folk art, balalaikas and samovars, but also opening private museums of Russian art or restaurants of Russian cuisine.

Now, Anti-Americanism is high but even among its loudest decriers not everyone is against all of America. Many people are critical of U.S. foreign policy and its politics, but at the same time accept, use and even love American culture and its scientific achievements (this is often a subject opponents are teased with: 'you are an anti-Americanist, and you use the computer with Windows, you have an iPhone, you watch Hollywood films, etc.').

If we're speaking about American cultural influence, of course it is very great in the field of popular, mass culture. But all forms of pop-culture are now filled with national meaning, for example songs people listen to more in their own language than in English. Who is asking anymore, where the ballet or symphony orchestra were invented? These phenomena have long been perceived as the expansion of the French, Italian or German culture.