Why a British photographer is saving churches in Russia's Far North 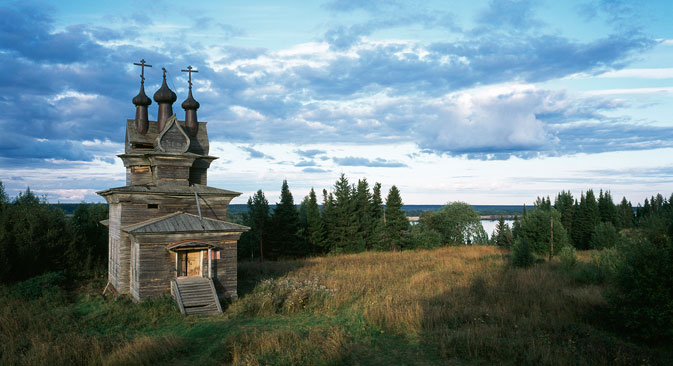 When the Iron Curtain came down and Russian opened its doors to the west, Richard Davies was on the first plane from London.

The British photographer was no stranger to Russia; in the late 1970s and early 1980s he had joined Intourist groups on visits to Moscow and St. Petersburg - at the time known as Leningrad.

The chance offered by the opening up of Russia after 1991 was a gift to a man already something of a Russophile.

Davies had discovered a love for Russia during childhood. At an early age, listening to Prokofiev’s second violin concerto - "the most exciting thing" he had ever heard, Davies found himself "head banging to Prokofiev while my friends head banged to the Rolling Stones." Later, an openly Communist local dentist opened him to the politics of the Soviet Union. "The waiting room", Davies recalls, "was strewn with copies of Soviet magazines and the patients were left to quietly soak up the propaganda."

But his first trips to the Soviet Union were disappointing, leaving him with a yearning for knowing the country, its culture and people more deeply. The organized tours he joined were, he found, devoid of real cultural exchange. Although "the Intourist guides were surprisingly open, […] getting a smile from anyone in the street, restaurant or museum was a challenge." More importantly, Davies had hoped to see the countryside of Turgenev and Tolstoy, a pastoral beauty he would finally experience after some unexpected inspiration.

In 2001, Davies discovered a series of images of wooden churches in Northern Russia, produced a century before by the artist Ivan Bilibin. "An innocent abroad", Davies set off on his own journey the following year. "I had no idea what I might find, who I might meet or indeed what might result from my travels", he notes.

Wooden Churches - the book that emerged from those travels - began as an exploration of the Russian countryside, but quickly grew into something greater. Over time, one trip to Russia each year grew to two or three. As Davies traveled the North, photographing the marvelous wooden churches that remained standing, he became familiar not only with Russia’s history of hardships, but also with the Russian soul itself and, in his words, "the lives of resilient people who have lived through extreme times in extreme places".

The churches reflect many of Russia’s historical extremes. Left to rot after the Orthodox Church began replacing wooden buildings with those of stone, the historic structures of the North came to be seen as a sign of abject poverty and backwardness. As a German traveler noted in the 1830s, someone from a village with a stone church would never marry someone from a village with a wooden one.

During World War Two many of the historic structures were destroyed by the invading Germans, renewing the state’s interest in maintaining them as a symbol of Russian perseverance. However, while Soviet-era notices, indicating 'under State Protection', remain hanging on the doors of decaying churches, the Kremlin today is "more interested in building up its nuclear arsenal than preserving historic churches in the far North", says Davies. Worse still, the church, too, seems to prefer building "flashy new churches" to restoring "creaky old historic wooden churches."

His travels leave him gravely concerned over the future of the wooden structures. For while some communities have chosen to devote time and resources to restoring and preserving their local wooden churches, like Verkhnaya Uftyuga and the volunteer group ‘Obscheye Delo’, in other settlements, time has taken its toll on the magnificent buildings.

Davies recalls hearing terrible stories: of tractors accidentally backing into churches, of local youth partying in them. "The wooden churches are special and deserve the same sensibilities of the talented craftsmen who created them", Davies insists, but tragically, there is little government funding and few qualified, responsible restorers. "There are great skills in Russia that could be harnessed to restore these extraordinary buildings", the photographer insists. "It is a culture worth fighting for."

Since 2002, Davies’ aim as a photographer has grown in scope; today, he looks to generate and renew interest in the restoration and preservation of these extraordinary structures, which possess "a spiritual presence that commands respect". The irony of a foreigner trying harder to preserve Russia’s historic churches than the Russian government itself does not escape Davies, to whom a Russian cultural attaché to the United Kingdom once pointed out that "you seem to be doing what we should be doing."

However concerned Davies may be over the future of wooden churches, his photography nonetheless celebrates Russia. His most recent work, Russian Types and Scenes, attempts to capture the people and places encountered during the making of Wooden Churches. There are many "extraordinary everyday things" to chronicle, from landing in fields next to wooden airport terminals to being questioned by authorities in towns with intercontinental ballistic missile sites. Likewise, portraits of Russians from the North, accompanied by quotations from Russian stories, give an insight into the complexity of the Russian character.

"I know that the people of the Russian North are kind and generous", Davies observes. "They are independent and hardy and have learned to survive through their own efforts in their stunningly beautiful land."

His love for Russians shines through in his preface to Types and Scenes - a passage from Labour politician Charles Buxton’s In a Russian Village: like Buxton before him, Davies hopes that his work "may help others think of Russia, not as an abstraction, not as a unit, but as a very large number of very interesting human beings, most of them lovable."

At a time of extreme political disagreement, the openness and curiosity of those like Davies is to be celebrated: a cross-cultural dialogue and exchange of ideas through travel and artistic expression.