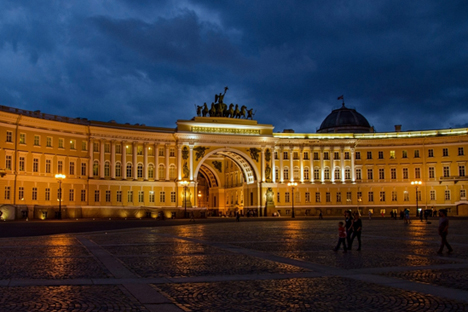 The Fourth International Cultural Forum to be held December 14-16.

Press photo
Timed to coincide with UNESCO's 70th anniversary, the IV International Cultural Forum will be held December 14-16. More than 300 events will be hosted at 80 venues in the city. RBTH has chosen five of the most interesting.

The Hermitage compares and contrasts two art collections put together during the same period, in the second half of the 18th century by two of Europe's great monarchs of the time – Catherine the Great in St Petersburg and the last king of the Polish–Lithuanian Commonwealth, Stanislaw August.

The Polish king's collection has a rather tragic history - its depletion began even during his lifetime and after his death it was completely sold off. One part went to Russian royalty and wealthy nobles; the rest was spread around the world.

The two monarchs shared similar tastes, which is why the collections contain so many European masterpieces of the 16th-18th centuries.

On December 14 participants and guests of the Forum can visit the museum for free.

The city's main drama theater opens the Forum with the premiere of a play, staged by Russian dramatist Victor Ryzhakov based on Tolstoy's classic novel.

According to the producer, the stage version of the novel reflects "the scale of Tolstoy through the number of characters and intensity of understanding of people’s destinies”.

The play is a kind of tour of the novel’s separate chapters, with the role of “guide” played by veteran Russian actress Alisa Freindlich.

3. “Sense of line”. In the memory of Louis XIV. Baroque ballet, Hermitage Theatre

This is the first experiment of the professional baroque ballet reconstruction as an independent stage act.

St. Petersburg artist Larisa Pogoretskaya created the costumes for the performance using sketches of typical theater outfits worn by the actors during the Sun King’s times.

The program will consist of baroque dancing in Italian (“comic”) tradition, a ballet set to music by Domenico dall'Oglio - a Russian court composer of the mid-18th century - and a suite of French dancing in the noble style, based on contemporary choreographer Raoul Feuillet’s notes.

The concert is devoted to music geniuses whose anniversaries are celebrated this year – Pyotr Tchaikovsky and Antonin Dvorak. The program consists of two congenial compositions – the Russian composer’s Violin Concerto of 1878 and the Czech composer’s Symphony No. 8. Along with the chapel’s orchestra, a violinist from South Korea Ru Khi Un, accompanied by conductor Ilya Derbilov will perform in the concert.

To get an idea of classical Russian painting of the 19th century you don’t have to walk around the entire museum - a gem of Russian art galleries. You can simply see the retrospective of Pavel Fedotov, who was one of the founders of critical realism.

In the paintings of Fedotov - known as the 'Gogol of painting' or 'the precursor to Degas' - you can find all the canons and main genres of Russian and European art of 18th -19th centuries – from landscapes to battle scenes and still lifes.

Participants and guests of the Forum can visit the museum for free.

Read more: 5 English portraits you shouldn’t miss at the Hermitage>>>