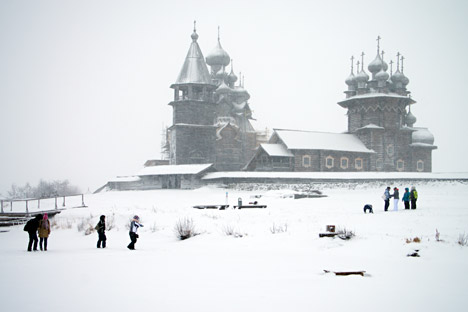 Shutterstock/Legion Media
This winter the Kizhi Pogost museum celebrates its 50th anniversary. The world-renowned architectural ensemble on an island in Lake Onega is included on the UNESCO list of World Heritage sites. Let’s examine some interesting facts about this legendary place and wooden marvel of Russian architecture.

1. People from the Novgorod Republic (existed from the 12th-15th centuries) are the ancestors of contemporary Kizhi inhabitants. One thousand years ago, natives of Novgorod started exploring the extreme lands to the north – they went fishing, sowed fields and raised cattle. In the 15th century Kizhi’s lands were included into the Grand Duchy of Moscow and for the first time was mentioned in the chronicles as Kizhi Pogost – a unit of villages.

2. Kizhi is a little island covered by carbonaceous shale. “Kizhi black earth,” “north anthracite” and schungite attracted artisans. “Flaky stone” was used for medical treatments and for painting cannons – people thought that it would return one’s youth. However, a factory for the processing of the metals in Kizhi was built only in the 17th century. Entrepreneur Semyon Gavrilov constructed it for the big reserves of copper and iron found on the island.

3. Producing knives was one way to make a name for yourself in the settlement. Unique Kizhi knives that almost never became rusty or dull sold like hot cakes at the Tikhvin Fair, Russia’s largest in 18th century. However, locals were hostile to all attempts at industrialization and even revolted. That’s probably why this island – one of 1,369 on Lake Onega – is today famous for two of its temples and a belfry. 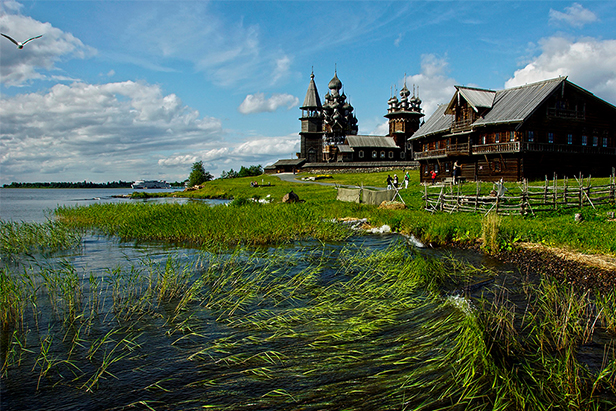 How I saw log churches and white nights on Kizhi Island

4. The Church of the Transfiguration appeared on the island 300 years ago. This temple with 22 domes was built from wood by an unknown master on the site of an old church that burned down after being struck by lightning. Its height from the basement to the cross of the central dome is 37 meters and legend has it that there are no nails in this building. However, although the church was built according to the canons of Russian carpenters, there are still some nails – in the domes.

7. An architectural echo of the ensemble is a tent-roofed belfry. The edifice was rebuilt in the 19th century because of decay. For 60 years – from 1929 to 1989 – the belfry was silent. The ringing of church bells was forbidden during the Soviet period and only during perestroika did all 12 bells start ringing again – nine old ones and three new ones.

8. Specialists began to view Kizhi as an architectural monument in the middle of the 19th century and the Academy of Arts sent a group of artists and architects there. In 1911 landscape painter Iegoshua Shlugleit composed "In the Far North.” This image of Kizhi Pogost was purchased by none other than Tsar Nicholas II of Russia.

Karelia: Land of the Flying Stones

9. Buildings from all over the Republic of Karelia – 68 in total – are collected in Kizhi, among which is the most ancient temple in Russia – the Church of the Resurrection of Lazarus from the 14th century. In 1966 Kizhi became a museum and later an open-air school: from May to September pupils and students come to the island to learn about its ethnography.

10. A quarter of a century ago Kizhi Pogost was included on the UNESCO list of World Heritage sites at the same time as the Historic Center of St. Petersburg and the Moscow Kremlin. The architectural ensemble was proclaimed unique according to three criteria – it represents a masterpiece of human creative genius, it is a construction in harmony with its surrounding landscapes and it demonstrates a feat of carpentry.

Read more: A weekend in Petrozavodsk and Kizhi>>>