Alice Cooper’s cane? Placebo’s drumsticks? Easy to get hold of! 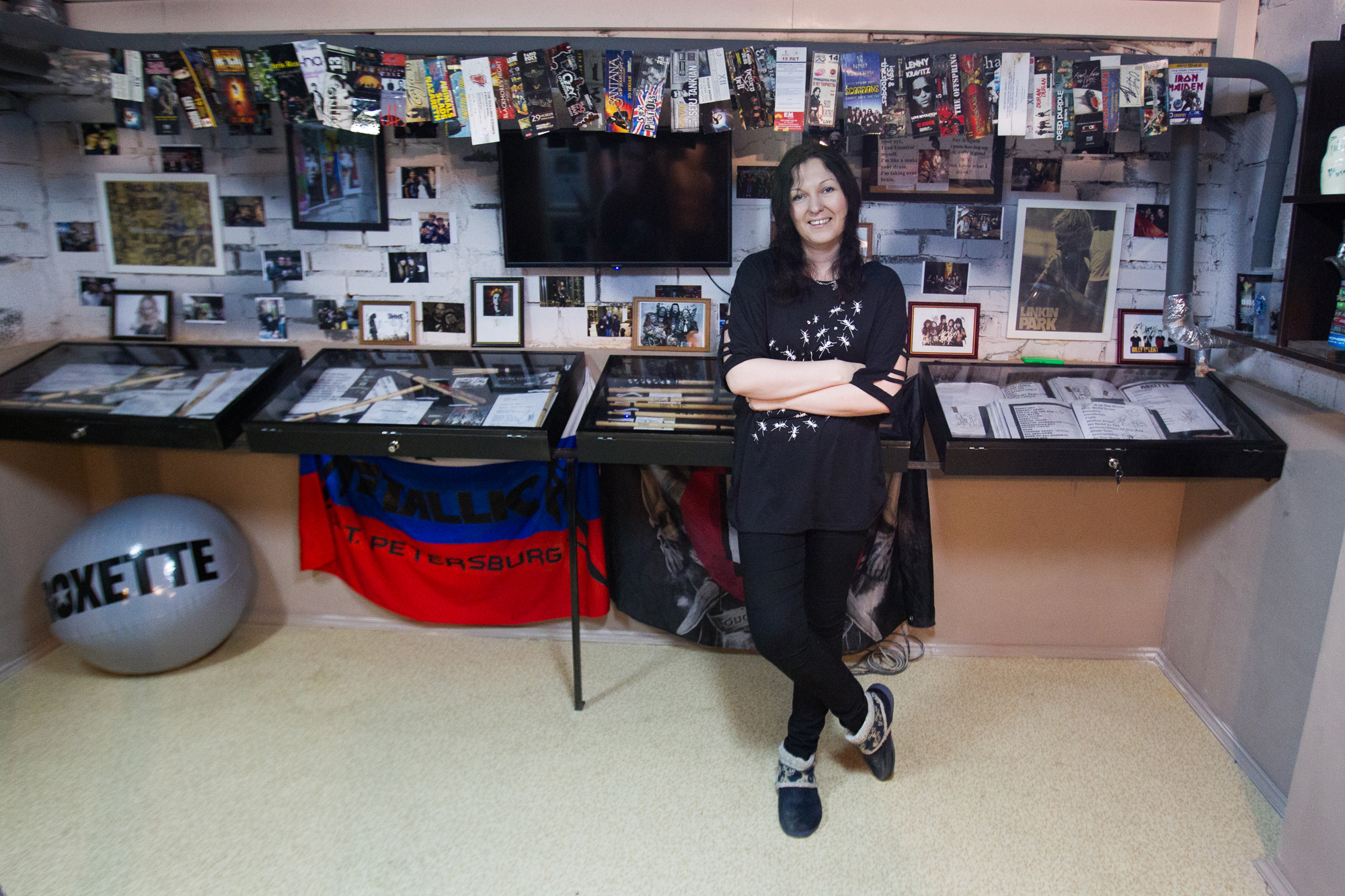 Russia's first rock artifact museum opened in St. Petersburg on Feb. 2. RBTH inspected items formerly belonging to the likes of Ozzy Osbourne, Ronnie James Dio, Red Hot Chili Peppers and the Prodigy – and found out how they got here.

The owner of St. Petersburg’s newly-opened Rock Artifact Museum, Anna Turova, says that her own collection began with a drumstick that she caught at a System of a Down concert.

"I had to pull it out of the hands of Finnish fans," she said. "It was an unequal fight, but I won."

Today, her museum features a collection of drumsticks that used to belong to drummers of musicians such as Billy Idol and Ozzy Osbourne and rock bands such as Placebo, Tito & Tarantula and Papa Roach.

For six years, Turova has been involved in event tourism and organized group tours to European rock concerts and festivals. During this time, she has participated in more than one fight to get hold of a piece of unique memorabilia.

"Once at a Metallica concert, a beach ball with the logo of the group was thrown into the audience," she said. "To get it, I struggled with two large Czechs. We tore the ball in the fight, but still I got it!"

The new museum has more than 1,000 exhibits – tickets autographed by global rock stars, drumsticks, picks, set lists and musicians' personal belongings. The museum's collection has been formed by several rock fans, but it is largely based on artifacts amassed by collector Oleg Osokin over 30 years.

A guitar for the chosen one

"The musician throws it from the stage and it hits you on the head," she said. "But you are happy that it hit you, not somebody standing nearby."

The history of the Russian rock artifact collecting movement has seen other cases of incredible luck. For instance, there is a photograph on the museum wall of St. Petersburg resident Polina Sidorik with Mötley Crüe bassist Nikki Sixx's guitar, which she got from the band.

"At the concert, I managed to get into the front row," said Sidorik.

"In the middle of a song, the group moved to the second stage in the middle of the room, so I turned to them. Suddenly, someone slapped me on the back, and I get a guitar autographed by the musicians with the inscription ‘God has blessed you.’ Mötley Crüe's technician handed it to me with the words, 'This is a gift from the band.'"

She believes Sixx chose her because she knows how to have fun at concerts.

Some fans are even ready to commit a crime in pursuit of a souvenir from one of their idols.

"In one case, a guitar was stolen from [Finnish melodic death metal group] Children of Bodom on a train," said Turova.

"And one day, when [Finnish rockers] HIM came to Russia, fans ripped off and stole a hat from [singer] Ville Valo's head. He even threatened not to come to Russia ever again."

For Turova, however, things obtained in such a manner are not an achievement.

"What's valuable is what you get directly from the musician's hands," she said. "This is a chance to touch the idol, get an autograph, talk to him."

In the museum, you can see matryoshka dolls on which musicians from The Prodigy and Papa Roach drew themselves at the request of a fan. A cap autographed by Swedish metal band Sabaton hangs nearby.

Soon, the museum's collection will be supplemented by an unusual exhibit – a car door signed by former Black Sabbath frontman Ronnie James Dio. One of his fans – a biker who repairs cars – brought the door to the concert, and the musician left his autograph on it.

The museum also has a large collection of concert setlists. According to Turova, the lists of songs can tell a lot about rock musicians.

"According to the rules, setlists must be pre-printed and placed at every microphone stand," she says.

"However, the museum shows how musicians prepare for performances in reality."

Anna shows a setlist from a Red Hot Chili Peppers concert and tells how the list of songs was hastily sketched with a marker right on the stage.

The other sheet of paper says "Privet, Billy, kak dela?" It was used as a reference by ZZ Top guitarist Billy Gibbons at a concert to please fans by addressing them in Russian.

Of course, there are more traditional ways to reach a rock idol – for example, to write a letter.

That's what Nikolai Vasin, Russia's best-known Beatles fan, did. In 1970, he sent a telegram to John Lennon to congratulate him on his 30th birthday. The answer was a Beatles record with the star's autograph.

Vasin's collection, which he exhibits at the Pushkinskaya 10 art center, boasts dozens of other Beatles records, books in different languages, the band's paraphernalia and scrapbooks of newspaper clippings since the 1960s.

"I began the collection 50 years ago," said Vasin. "That's when I heard the Beatles on the BBC, and now I have their music playing every day."

Vasin takes special pride in his photo with Paul McCartney.

"I had a friend in McCartney's security team who told Paul's manager about my collection," he said.

"One month before McCartney's visit to St. Petersburg, he was here, photographed my collection, showed it to Paul, and Paul was delighted. When he arrived, he saw me, hugged me and kissed me on the cheek twice. Here it was – the greatest moment of my life."