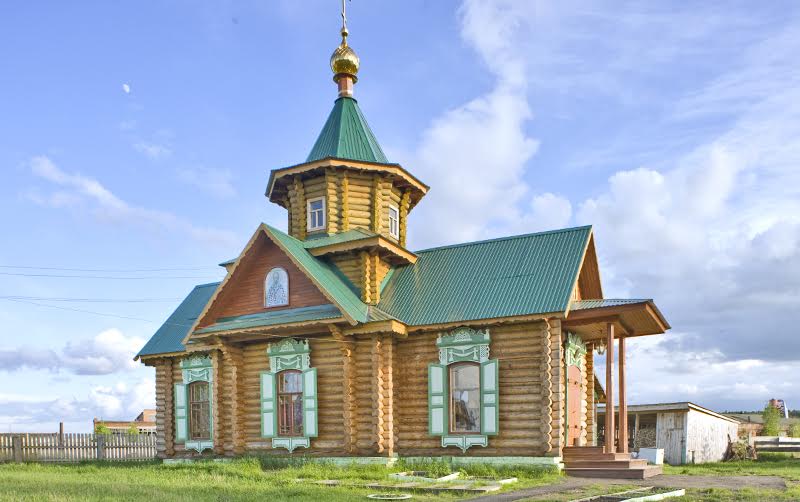 The Yenisei and its tributaries form Russia’s second-largest river system, covering almost one million square miles from the Mongolian border to the Arctic Ocean, and have long served as essential arteries of trade and transportation in the development of Siberia. In the 20th century, the Yenisei assumed a significant new role, becoming a means of tapping the wealth of Siberia’s forests on an industrial scale.

A prime example of this is the town of Lesosibirsk, whose name joins the Russian words for “forest” and “Siberia.” The town, whose population is slightly under 60,000, is located on the Yenisei some 170 miles north of Krasnoyarsk and 19 miles north the river’s confluence with the mighty Angara.

Although Lesosibirsk was formally incorporated only in 1975, a settlement known as Maklakov Meadow existed at the site as early as 1640. At that time, the neighboring river port of Yeniseisk (22 miles to the north) was the administrative center of eastern Siberia. Maklakov was an outlying village of little significance whose name apparently derived from a term for petty trader, sometimes in stolen goods.

But at the beginning of the 20th century, Norwegian entrepreneur Jonas Lied (1881-1969) chose the site for a large lumber mill and its fortunes changed dramatically. An extraordinary figure in the development of Siberia, Lied had a special interest in the Krasnoyarsk area, and in 1912 he founded the Siberian Steamship, Manufacturing and Trading Company. The following year, he made a widely reported trip with the explorer Fridtjof Nansen to the Kara Sea and the lower reaches of the Yenisei.

Take a regular flight from Moscow or St. Petersburg to Krasnoyarsk (Domodedovo or Sheremetyevo airports, depends on the airline; travel time is about 4.5 hours). Then take a local bus from the main bus station to Lesosibirsk (travel time is about 5 hours).

The mill established by Lied continued to function as a state enterprise during the Soviet period. After World War II, operations were greatly expanded (in part with Gulag labor) in order to process vast stands of Angara pine cleared in advance of construction of the Bratsk Hydroelectric Station. To transport the flow of timber, a spur rail line was built from the settlement to Achinsk, 170 miles south and located on the Trans-Siberian railroad. In 1975, an expansive river port opened, and the settlements of Novomaklakovo and Novoeniseisk combined to create the town of Lesosibirsk.

Today, the area’s economic mainstay is the giant Woodworking Combine No. 1, one of the largest such factories in Russia. Russian lumber plants have often been characterized by their haphazard appearance, but LDK No. 1 (from its Russian acronym) represents the industrial might of central Siberia. Instead of carelessly piled boards, echelons of rail cars are stacked with lumber protectively wrapped for transportation throughout the country and for export to Asian markets. By virtue of its strategic location, Lesosibirsk is also part of the planning for a rail megaproject known as the North-Siberian Mainline.

For all its economic prospects, Lesosibirsk has little to distinguish it architecturally from other post-war industrial towns. There are, however, two striking exceptions to local architectural monotony—both of them Orthodox churches and both supported by the lumber factories. In the north part of town is a capacious church dedicated to St. Andrew, the First-Called Apostle, who is especially revered in Russia because according to legend, he brought Christianity to the lands that later would be inhabited by the Eastern Slavs.

The Church of St. Andrew impresses for a number of reasons, but especially for its sensitive interpretation of the style of 14th-century churches in the medieval commercial center of Novgorod. Begun in 2007, the church was consecrated in January 2012 on the territory of the former Novoyeniseisk settlement. The design was the work of Krasnoyarsk architect Vladimir Medievsky, assisted by Father Andrei Yurevich, a priest and professional architect.

Anyone familiar with medieval Russian architecture will be startled by this apparition, a faithful recreation of ancient Novgorod within a Siberian grove of birch and pines. The walls, built of brick and painted white, show Novgorod-style details such as embedded crosses and decorative brick borders. The upper structure culminates in trefoil curves that lift the sinuous copper roof to a single gilded cupola.

On the southern edge of town is yet another visionary shrine, perhaps even more striking than the St. Andrew Church. Overlooking the Yenisei River, the Cathedral of the Elevation of the Cross is considered the largest church in Krasnoyarsk Territory—and perhaps in Siberia generally.

Designed by Alexander Bannikov of the Krasnoyarsk studio “Architecton” (with the assistance of Father Andrei Yurevich), the Lesosibirsk cathedral was built between 1995 and 2002. The structure soars to a height of almost 230 feet and culminates in a “tent” tower that resembles the early 16th-century Church of the Ascension at Kolomenskoye (Moscow), one of the most distinctive monuments in medieval Russia. The vertical emphasis of both churches is echoed in their dedications.

The Cathedral of the Elevation of the Cross also follows the medieval concept of a “church beneath a bell tower,” with an opening for 11 bells above the central structure. Such a design would have been impossible on the scale of the medieval Ascension Church at Kolomenskoye, but modern technology enabled the large openings at the base of the “tent” tower. The red brick walls support 13 gilded cupolas.

The cathedral interior is dominated by an icon screen with six rows (instead of the usual five). The icons were painted by the workshop of Father Vitaly Shumilov in the Moscow Region town of Dubna. On the sides are two additional altars, the left of which is dedicated to the Icon of Our Lady of Vladimir. The altar on the right (or south) side is dedicated to the Royal Martyrs—the murdered family of Tsar Nicholas II.

The crepuscular reaches of the cathedral interior create a mystical acoustic space appropriate to the Orthodox liturgy, with its Byzantine origins. Hearing the liturgy sung in this space impresses with the extent of Orthodox spiritual culture, from the Bosphorus to the Siberian taiga.