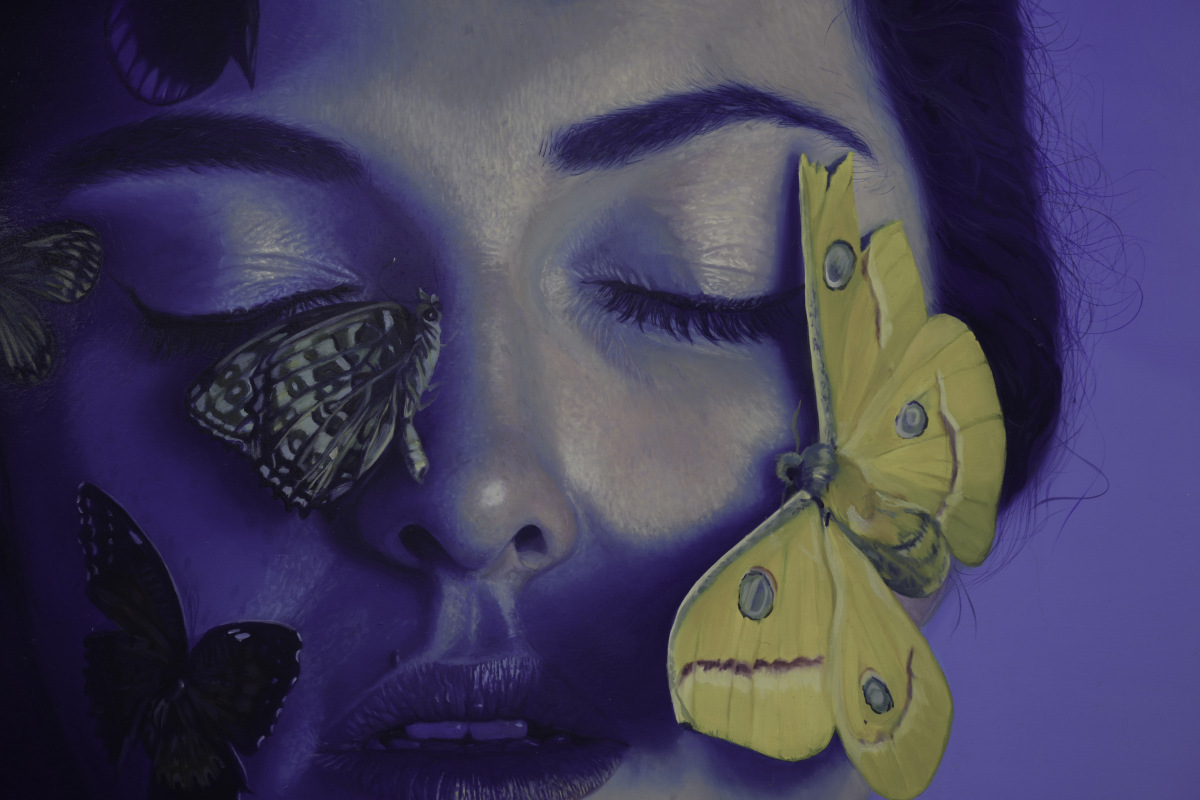 Detail of ‘Gotta Learn to Fly’

Irina Starkova
Artist Irina Starkova’s exhibition “Still Lives” is on show in Mayfair until May 31. Her first UK solo show explores how birds, butterflies and other insects have shaped the human world.

For Russian artist Irina Starkova, it’s all about the birds and the bees – or to be more accurate, about putting them behind glass. Her first UK solo exhibition, currently on display at Erarta Galleries London, explores the influence that the forms and patterns of insects and birds have had upon humanity.

Starkova spent the summer digging in the archives of the Natural History Museum and Institute of Tropical Medicine in London. While researching ornithology and entomology, she made photos of the specimens and wanted to make a film. But then she found something deeper than just a butterfly’s wings.

On show until May 31, the exhibition Still Lives is a collection of the detailed, analytical drawings, examining how birds and insects “have shaped the human world, as we constantly copy and borrow their forms, their colors, textures and adapt them for our use,” she commented to RBTH.

One of the main dilemma and inspiration for the project was taxidermy, which Starkova says historically played “a key role in promoting wildlife conservation and giving people a chance to see creatures from different habitats that they wouldn’t have otherwise been able to see.”

“Today, however,” she added, “with the advent of modern technology, its role is less clear.”

Formative experience at the dacha

As a child, Starkova spent her summers at the family’s dacha in Russia, where the swallows used to build mud nests under the roof of the wooden house. Sometimes the eggs or chicks fell to the ground because of holes or cracks in the nests and Starkova would collect them and rear them by hand until they could fly away.

She remembers her first visit to the Natural History Museum, which has a huge collection of birds.

“It felt like something out of Night at the Museum. I was given a key and told on which floors I could find certain bird species, and then left in the cold dark archives to find my inspiration. I had all these bird corpses around me – it was utterly compelling!” she said.

One of Starkova’s aims was to show how people use the animal kingdom to express human emotion.

“The chickens have been molded into poses to express basic human desires and the eagle with the halo makes a saint out of a martyr – showing how the human world idolizes the dead,” she said.

The entomological boxes explore how insects have literally shaped (consciously or unconsciously) household objects, symbols (letters, signs) that people use in everyday life. For example, the physical shape of a butterfly resembles the infinity symbol.

Born in Moscow, Starkova currently divides her time between London and Monaco. From an early age, she became interested in photography and the art of processing and developing film. From an early age she started collecting stamps, old Soviet postcards, photos and magazines.

But most of all Starkova loves insects: dissecting them, making homes for ants, tadpoles and beetles.

“I love the process of relaxing the butterflies and spreading their wings on a mounting board – I always have the feeling that they might come alive!” she said.

Starkova says she is inspired by great writers: Huxley, Greene, Bulgakov and Nabokov, the last of whom was a keen lepidopterist famous for his research on the winged creatures – he even wrote a book, Butterflies.

Still Lives is on display at Erarta Galleries London until May 31. For more information visit www.irinastarkova.com.

A digest of contemporary Russian art on display in London