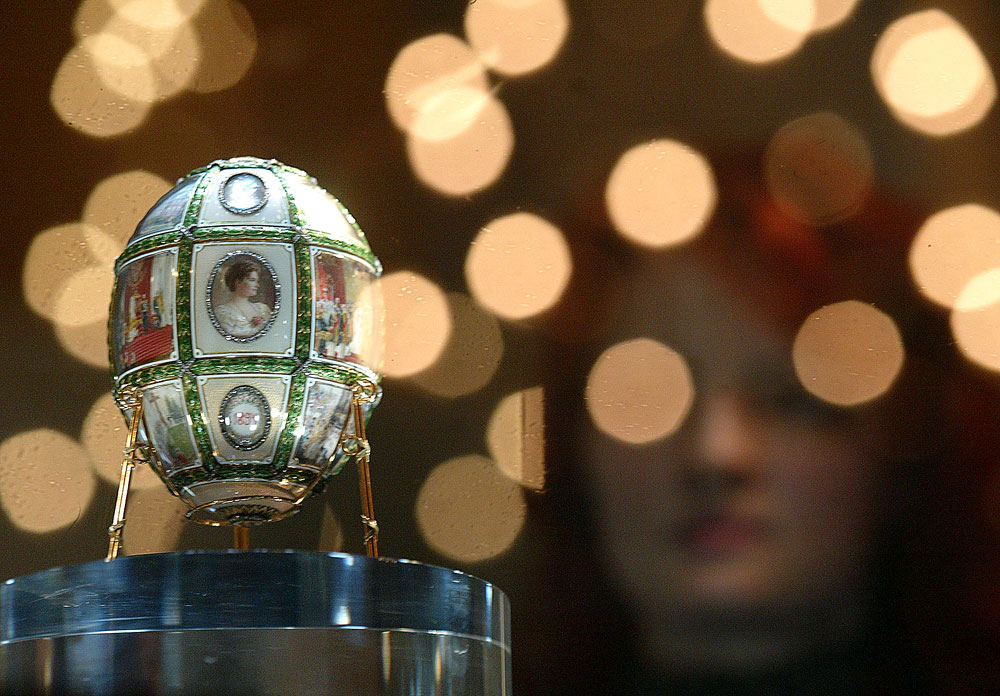 A visitor admires the Egg by Faberge, presented by the Russian Czar Nikolas II to his wife in 1911, during an exhibition in the Kremlin in Moscow.

Reuters
May 30 marks the 170th anniversary of the birth of Peter Carl Fabergé, the legendary Russian jeweler. From the Huguenots of France to the British queen, RBTH retraces the life of the creator of the famous Fabergé eggs.

1. He followed in the footsteps of his father

Peter Carl inherited his job from his father, Gustav Fabergé, who opened a jewelry workshop – doubling as a store – in St. Petersburg back in 1842, even before Peter Carl was born.

Peter Carl Fabergé. Source: Press photo
The family emigrated to Germany first, later moving on to what is now the Baltics, where they stayed until the search for wealthier clients led them to St. Petersburg in the 19th century. Peter Carl took over as the head of the family business in 1872, having studied both jewelry and entrepreneurship.

Gustav's ancestors were Huguenots who fled France in the 17th century, escaping persecution.

2. He didn’t make a single item by himself

While Fabergé is usually referred to as a jeweler, he never crafted anything with his own hands. A great manager, he assembled a team of the best jewelers of his time and provided them with a steady stream of orders. He also had the uncanny ability of understanding what exactly his clients wanted. However, he did indeed personally design some of his company's products. He also spent 15 years studying and renovating jewelry items from the collection of St. Petersburg's State Hermitage Museum.

Fabergé's company first came to prominence after it was awarded a gold medal at the 1882 Russian Industry & Art Exhibition in Moscow. The company was lauded for its copies of Ancient Greek gold jewelry items from the Hermitage collection. During the event, Empress Maria Feodorovna bought a pair of Fabergé's stylized “antique” cufflinks, and Fabergé himself shortly became Jeweler to the Russian Imperial Court.

In 1897, Fabergé hit it really big at the Stockholm World's Fair of 1897, as he became the court jeweler to the royal family of the United Kingdoms of Sweden and Norway. In 1900, he became famous enough to become one of the jury members at the World's Fair in Paris along with fellow jewelers Frédéric Boucheron and René Lalique; the same year he was also awarded the Légion d'Honneur, the highest order of merit of France.

5. He crafted a wide range of luxury accessories

Fabergé's company produced silverware, cigarette cases, desk sets, miniature silver figurines adorned with semiprecious stones, various trinkets like powder cases and candy boxes, and the so-called objets de fantasie (ornamental items, small statues and so on). However, the jeweler is best known for his intricately-designed Easter eggs made for the Russian royal family.

6. He is mostly remembered for his Easter eggs

The first Fabergé egg was made in 1885 – Tsar Alexander III ordered it as a gift for his wife, Empress Maria Feodorovna. Within the white enameled egg was a yolk made of gold, which contained a golden hen, which in turn opened up to reveal a tiny replica of the Imperial Crown and a ruby pendant.

Looking beyond Fabergu00e9: The great Russian jewelers of the 19th century

The Empress liked the gift so much that from then until the Russian Revolution, Fabergé's company received a special order for an Easter egg from the royal family each year. During the reign of Nicholas II, the company produced two eggs each year, one for his wife, Empress Alexandra, and one for Empress Dowager Maria Feodorovna.

In total, Fabergé crafted 50 Easter eggs for the royal family (eight of these were lost), plus about 20 eggs for other clients. After the revolution, the jewelry of the royal family was sold off, and three of the eggs wound up in the collection of Queen Elizabeth II of Great Britain.

7. His clients were royals and celebrities

Peter Carl produced almost all of the diamond jewelry owned by Mathilde Kschessinska, a prima ballerina of the Bolshoi Theater and a former mistress of Nicholas II. As she herself recalled, for security reasons she would not keep her jewelry with her, and stored it in a special safe at Fabergé's.

When the ballerina was about to perform abroad, she reached the company's office by phone and gave a secret number which stood for one of the trinkets; the company would then deliver the item to the corresponding country with a guard who personally took it to the hotel or the theater, and never left the ballerina's side.

8. He also made items for ordinary people

Some of Fabergé's products were accessible not just to the nobles, but to ordinary Russians. For example, right before Easter, the company's stores started to sell miniature enameled egg pendants in various colors.

The The egg shop in St. Petersburg. Source: Press photo

Similar pendants were given each year to the grand princesses of the royal family, so they slowly collected a full necklace made of these.

9. He opened a store in London

By the early 20th century, Fabergé's company had offices in Moscow, Odessa, Kiev and London. After the London store was opened, Empress Maria Feodorovna, who was the sister of Alexandra of Denmark, wife of King Emperor Edward VII, said Fabergé had made her life more difficult, as, before this expansion, she always knew where to get a nice surprise gift her British relatives would not expect.

During the Russian Revolution of 1917, when Tsar Nicholas II abdicated and the Bolsheviks seized power, Peter Carl Fabergé managed to flee the country by posing as a courier from the British embassy. All he could take with him was a single briefcase, but thanks to the jewelry stored in the London office and with his many foreign partners, Fabergé was able to lead a decent life abroad.

He first moved to Latvia, and then went on to Germany, but the stress he had to endure finally caught up with him – he died in 1920 in Lausanne, Switzerland, while recovering from an illness. The goldsmith was buried at the Cimetière du Grand Jas in Cannes, France.

The Fabergé saga: The fall of two empires>>>