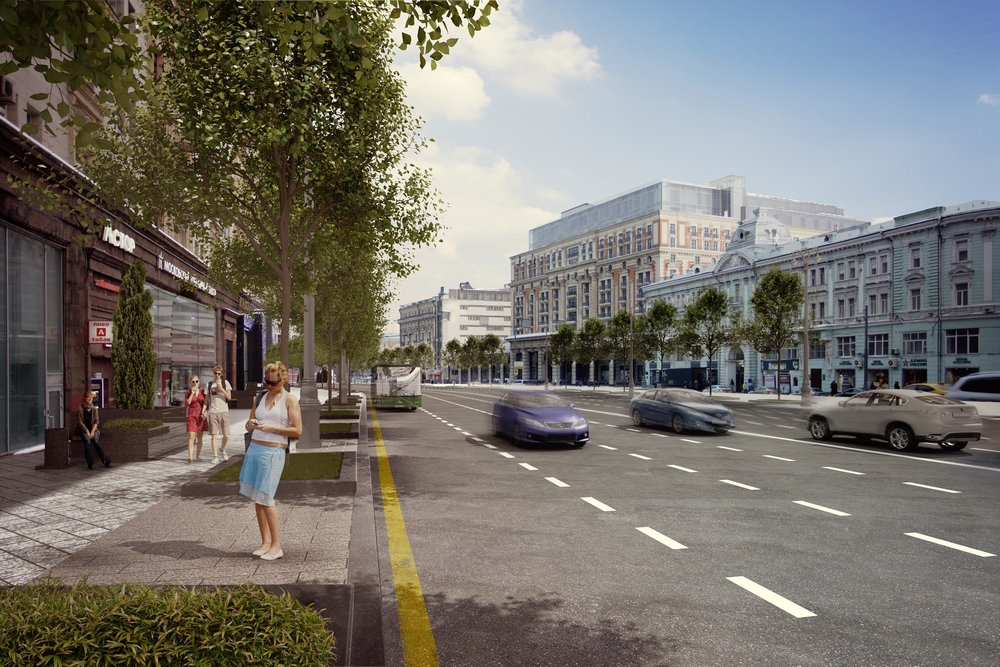 The main proposal is to restore a lime tree alley that adorned Tverskaya from the late 1940s to the 1990s.

Press photo
In the 15th century, Italian architects erected several key administrative and religious buildings in the Kremlin. Today, the center of Moscow is being transformed by foreigners once more – this time by architectural firms from the Netherlands, the UK and the U.S.

From June 30 to July 3, Moscow hosted the sixth edition of the Moscow Urban Forum, devoted to growing megacities and the challenges associated with urban development. A separate session was dedicated to the architectural projects that will appear in the Russian capital in the coming years, many of which are being carried out by foreign companies.

The project of reconstruction of Moscow's main street has been developed by the Dutch bureau West 8 in cooperation with Russian consulting agency Strelka. The main Dutch proposal is to restore a lime tree alley that adorned Tverskaya from the late 1940s to the 1990s.

"The trees that will appear on the expanded sidewalks will be the street's main decoration in any season and will noticeably humanize bustling Tverskaya," Adriaan Geuze, the founder of West 8 and one of the authors of the project, told RBTH.

Press photoA square near the Pushkinskaya metro station in Moscow

For this, the architects have widened the sidewalk (by reducing the number of lanes for traffic) and divided it into two zones: a pedestrian one – made of light granite – and a “technical” one – made of dark granite matching the color of the plinths of the buildings. The technical strip will have lime trees, bus stops and lampposts recreated from historical drawings from museums' collections.

Passers-by will be reminded about the history of the street by a fragment of a wooden pavement from the 14th-17th centuries – found in the middle of Tverskaya during the excavation of older layers of soil. The authorities promise to preserve a portion of the wooden framework, covering it with glass windows. The street is scheduled to be fully upgraded by the end of 2016.

This innovative landscape park will open in September 2017 – in honor of the 870th anniversary of Moscow – on the site of the former Rossiya hotel near the Kremlin. The capital's most ambitious and expensive city improvement project to date, its cost is estimated by the authorities at 380 million euros ($420 million).

The decision on its creation was made in 2012 on the initiative of Russian President Vladimir Putin. An international competition for the concept of the future park was held in Moscow in 2013 and saw victory go to an internationalist consortium led by U.S. company Diller Scofidio + Renfro, the designer of the High Line Park in New York City.

There will be a philharmonic venue, themed pavilions, including exhibition rooms, as well as a large pedestrian zone leading from Varvarka Street to the Moskva River embankment. According to the design, the future park will connect all the city center's hiking routes – from the Kremlin to the Sparrow Hills.

The Skolkovo Innovation Center lays claim not only to the title of Russia's Silicon Valley, but also to the status of one of the centers of modern architecture.

So it was fitting that top-tier international teams were invited to participate in a closed competition for the architectural concept of the future Sberbank Technopark at the end of 2015, including such bureaus as Foster + Partners and Fuksas.

The project, however, was awarded to Zaha Hadid Architects – this is one of the last projects by Zaha Hadid, who died in March 2016. According to her concept, the technopark's streamlined glass building will follow the contours of the land plot of 7.83 hectares. A boulevard is to run between the building's two transparent spaces, with a large glass hub serving as the gateway.

"We want to review and improve the fundamentally modernist approach to the creation of workspaces, which has so far served as a kind of universal," said the project's manager, Christos Passas of Zaha Hadid Architects, explaining the architectural concept.

"We see new opportunities in the accentuation and transformation of modular components with a simplified geometry, the updated and improved access to light and territories, involving a maximum of fresh air in the working environment."

More than 10,000 Sberbank employees are to move to the technopark building when it is ready. A laboratory, lecture halls, classrooms, and an R&D division will be built for them here. The complex, with a total area of 131,500 sq. m, should be completed by 2020. The cost of the project amounts to about 280 million euros ($310 million).