Culture
Anna Popova
Established as an iron foundry in the early 18th century, the Kasli plant began producing cast-iron sculptures in the 1820s and quickly became famous all over the world. Yulia Maslova, the head of the Department of Metal and Stone at the All-Russia Museum of Decorative, Applied and Folk Art, told RBTH about artistic cast-iron traditions.

1. The idea of cast-iron sculptures grew out of industrial plants

The Kaslinsky Cast Iron pavilion created one hundred and ten years ago was opened after the renovation at the Fine Arts Museum. Source: Anton Butsenko / TASS

In 1747, industrialist Yakov Korobkov bought land in the settlement of Kasli in the Chelyabinsk Region (about 1,100 miles east of Moscow), where he built several factories. Initially, the bulk of the orders were for the military, but the Ural plant also produced fine cookware, such as pots, cauldrons and other utensils.

The famous artistic castings appeared later, in the 1800s, first as copies and then as original works.

Factory manager Grigory Zotov brought the first model sculptures for art castings from Berlin in 1820. It was from these models that the Russian masters made their copies. In 1855, Mikhail Kanayev, a graduate of the Imperial Academy of Arts, began to work in Kasli as the factory’s first professional sculptor. The famous Kasli indoor sculptures were based on his designs, and later, on designs by other famous sculptors. Sculptures with their own distinctive style and subject matter appeared, and they later became quite well-known: Wood-sledge, Old Woman at a Spinning Wheel and others.

Subsequently, Zotov's work was taken over by Grigory Druzhinin. A passionate collector, he was the factory's manager and de facto art director for 30 years. Druzhinin added to the collection of model sculptures used by Kasli masters for their own work.

The models included about 20 sculptures by Peter Klodt von Jurgensburg, the sculptor of one of St. Petersburg's most recognizable landmarks, The Horse Tamers on Anichkov Bridge. Today, the plant's model collection includes 800 artistic castings, as well as about 400 architectural and other castings.

4. Kasli castings are still made according to old techniques

Over the years, the basic technical aspects of casting remained unchanged. It was believed, for example, that the iron is obtained using charcoal. In turn, models are manufactured using the method of dry molding: a model made of wood, clay or wax is pressed into the molding material and molten iron is poured into it.

The finished sculpture is preceded by the creation of a sketch, model, casting, stamping and coating with a special compound of carbon black and varnish, which gives the sculptures a special black velvety tone.

Kasli cast-iron sculptures were but in no way inferior to more expensive bronze ones. Such interior decorations were affordable not only to but also to officials and merchants. Ashtrays, paperweights, and chandeliers were all produced at the Kasli plant.

The egalitarianism of the cast iron is striking, as it can be made into utilitarian objects or fine works of art. When the Russian imperial court placed orders with Italian architect Carlo Rossi, he entrusted the casting of the architectural details to masters.

A worker of the Kasli Plant for Architectural and Art Castings covers the surface of a sculpture with a paint. Source: Alexander Kondratuk / RIA Novosti

In 1900, Kasli participated in the World Exhibition in Paris. When designing the Kasli pavilion, architect Yevgeny Baumgarten used elements of Russian modernist style as well as Byzantine and Scandinavian motifs. This work glorified Kasli not only in Russia but also abroad.

There was also an amusing episode during the exhibition. A sculpture called Russia by Nikolai Laveretsky stood in front of the pavilion – an allegorical image of a woman in armor and with a sword in hand, which personified Russia. Many inquired about buying it, but after long a reply came from the plant: "Russia is not for sale!" Today, the restored and reconstructed pavilion can be seen at the Yekaterinburg Museum of Fine Arts.

7. Casting is a family business 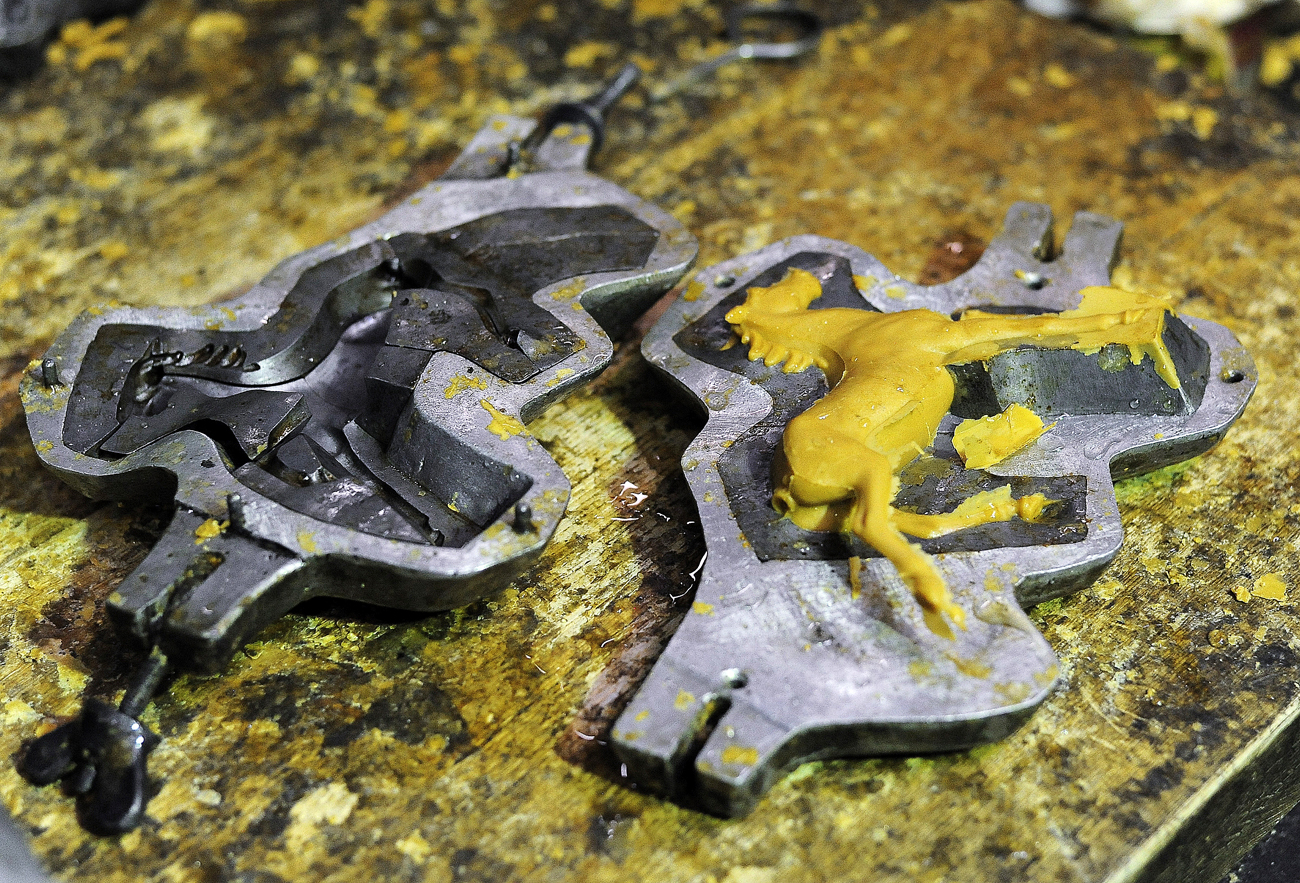 As happens in many other crafts, Kasli has had masters who learned their skills from their fathers, and this tradition continued into the 20th century. Semyon Gilyov was in charge of the reconstruction of the pavilion in Paris beginning in 1957. His son Alexander worked at the factory for more than 30 years, including 10 years as the head sculptor. Thanks to him, was able to uphold its high standards during the Soviet era. great-grandson also works with cast iron in the Kasli tradition.

Even now, when the raw materials are brought from the Chelyabinsk Metallurgical Plant, the art-casting workshop still maintains its traditions. Last year, the Kasli masters even conducted an experiment, producing a small number of brooches, and earrings made of cast iron. All of these items are quite small: no larger than a matchbox and no thicker than the lead in a pencil.

The vanishing masters: How and where the Caucasian burqa is made>>>