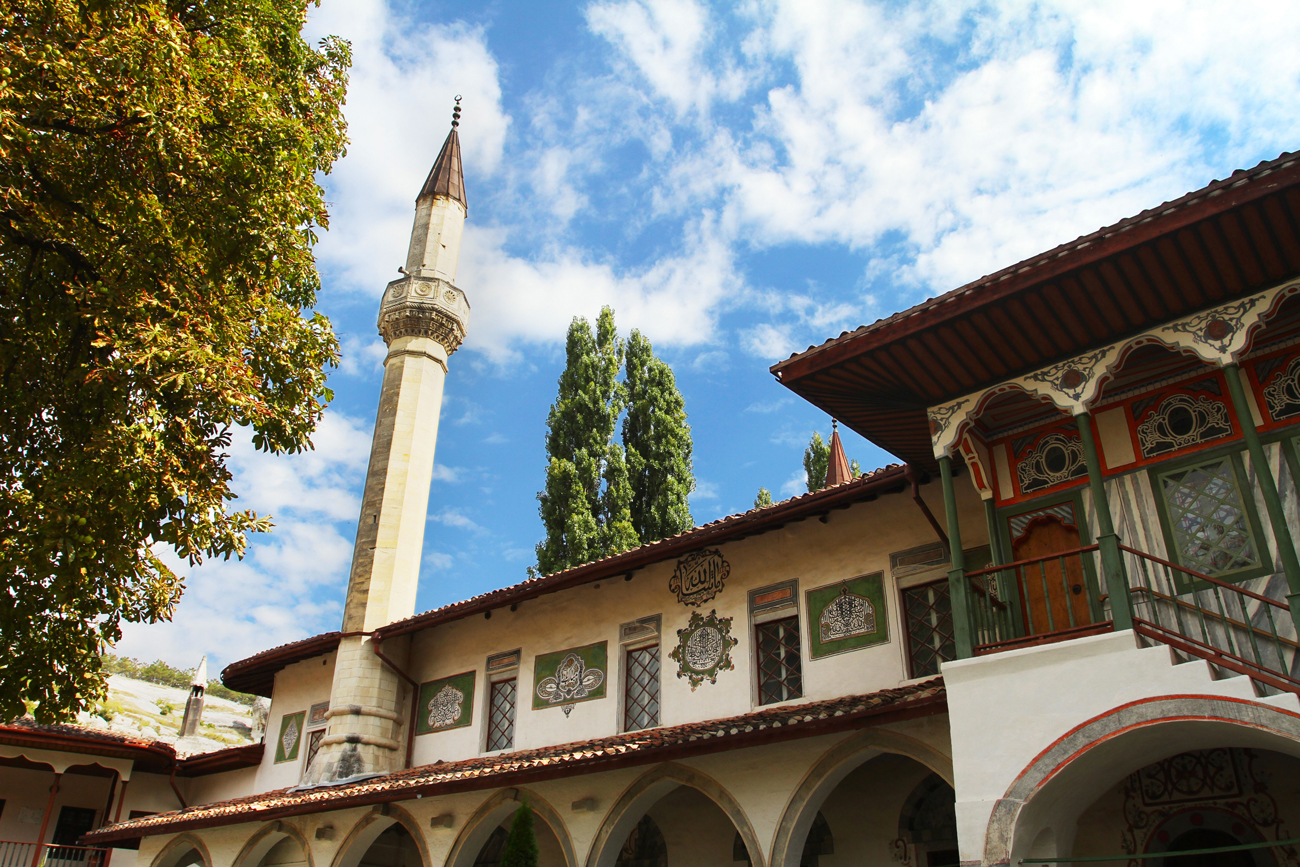 Alamy / Legion-Media
The Bakhchisarai Palace, one of the jewels of Crimea, is the only remaining example of Crimean Tatar palace architecture. The history of the Khan's residence goes back almost 500 years, to when the peninsula was an Ottoman vassal state.

Today the building is a unique monument of Crimean-Tatar palace architecture. It was erected in the middle of the 16th century. The earliest structures on the territory – the Sarah Guzel baths and the Big Khan Mosque – date to 1530. A special lodge was built for the sovereign decorated with stained-glass windows and Iznik tiles. Interestingly enough, the mosque still functions today.

2. The palace was the center of the Khanate's political life

For more than 200 years the palace was the center of the Crimean Khanate's political life. Each new leader erected new structures, thus immortalizing his name and forming the edifice that we see today. Its numerous fountains and gardens eloquently remind us of the palace's name: in Crimean Tatar the word bakhchisarai means garden-palace. The estate, a place where one can rest and cool off, embodies the idea of heaven on earth.

"The palace compound was built in a typical architectural style for Crimea at the time. Besides the administrative quarters, it contained the Khan's and his family's private apartments, a library, mosques and other structures," says Anna Polkanova.

The Divan Hall is one of the most impressive in the palace. Here the most pressing issues in the Khanate were decided. The Khan would sit in his throne, which was wrapped in orange cloth and decorated with golden needlework. The Khan's confidants were allowed to sit on low sofas and his advisors sat on benches by the wall. The hall still has the 16th-century stained glass windows and carved ceiling.

The renowned Crimean Tatar architect Omer worked on the palace. His paintings can still be seen in the Big Khan Mosque and the Summer Gazebo. In the 18th century he rebuilt the gazebo, adding another floor for the Golden Cabinet

4. The Russian army burned the palace in the 18th century

In 1736, during the Russian-Turkish War, the Bakhchisarai Palace was seized by Russian troops. "Under Field Marshal Minikh's command the Russian army entered Crimea for the first time," explains Gennady Marshtupa, a senior researcher at the Moscow Historical Museum.

"Minikh and his army reached Bakhchisarai and set the palace and the Khan's capital aflame. He then sent a missive to Empress Catherine II [the Great] about his 'complete victory.'" Afterwards, the palace was rebuilt, but the description of the compound that Minikh asked his experts to prepare has survived.

5. The palace was glorified by poet Alexander Pushkin

One of the most famous monuments on the palace territory is the Fountain of Tears. According to legend, Qirim Giray Khan ordered it to be built in memory of his beloved Dilyara Bikech and placed it by her mausoleum. The dripping water symbolized his tears of grief and the bowl represented the sorrow filling his heart.

In 1787, not long before Catherine the Great's visit, it was brought to the court of the fountains. In 1820 Russian poet Alexander Pushkin visited Bakhchisarai. Several years later he wrote a poem called The Bakhchisarai Fountain, glorifying the palace: "Fountain of love, the living fountain!/I bring you two roses as a gift…" For many years now, in accordance with tradition, every day two roses have been placed in the fountain.

6. Russian tsars have stayed in the palace

Russian monarchs would frequently come to Bakhchisarai. Catherine the Great spent three days here. As a token of her visit a road sign was created, the so-called "The Catherine Mile," marking the empress's journey from St. Petersburg to Crimea. Later Alexander I, Alexander III and – in 1912 – Nicholas II came to the palace. Memorials dedicated to the Russian tsars still stand today. In 1913, on the 300th anniversary of the House of Romanov, Bakhchisarai residents chipped in and built a fountain – the first of a series of monuments constructed for the occasion.