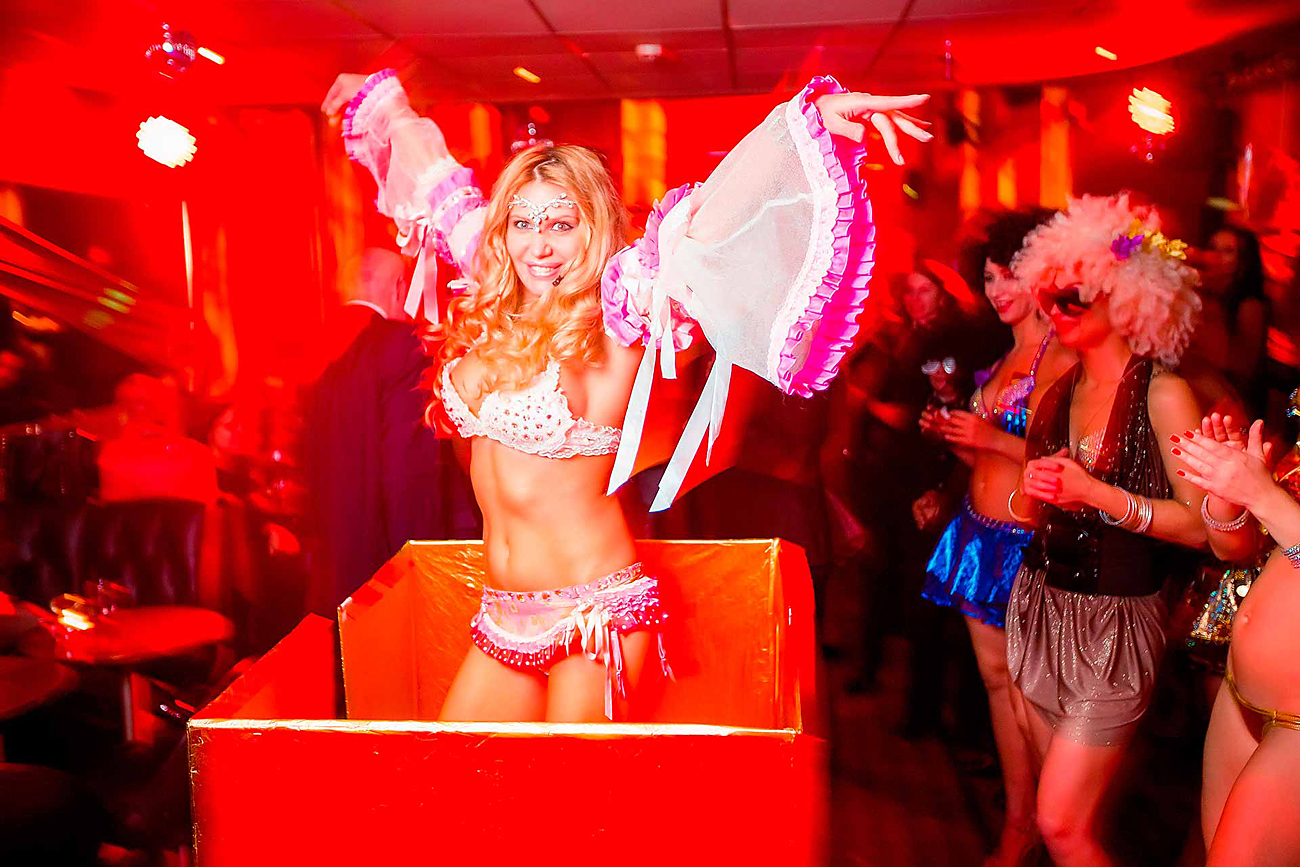 Press Photo
Located right in the heart of Moscow, Night Flight was Russia's first nightclub. On Oct. 25 it will celebrate its 25th anniversary. Tanks on the streets, the scandal with Bryan Adams, fights between Gaddafi's bodyguards and throngs of prostitutes: The club has seen a lot in the quarter of a century since it opened its doors.

1. Tanks drive by the club

Night Flight opened on Moscow's main drag, Tverskaya Street, in 1991 when the USSR was living out its final months. "There was absolutely nothing in our country, in Moscow in particular," remembers Yury Giverts, one of the club's founders. Two Swedish partners brought all the club’s furnishings from Sweden. "And this was not only furniture, but also the wallpaper, the ashtrays, toothpicks, screws and screwdrivers," says Giverts. Until the middle of 1990s, when there was a shortage of food in Russia, everyday a truck with produce would arrive from Sweden.

All the equipment was brought to the club on Aug. 15, 1991 and on the 19th the putsch began – the State Committee on the State of Emergency tried to remove President Mikhail Gorbachev from power. Tanks drove past the windows of the future club on Tverskaya. The coup attempt failed and on Oct. 25 Russia's first nightclub opened its doors to the public.

2. Vodka for kroner and yen

In the 1990s Night Flight was primarily oriented towards foreigners – most Russians, except the nouveau riche, had no time for night clubs. The club was the first establishment in Russia where all the staff spoke English.

Back then the ruble was not convertible and for food and drink foreigners would pay in international currencies, any currencies.

"In the morning we'd see that the receipts had been issued in everything from Swedish kroner to Japanese yen," says Giverts. Now everyone pays with rubles but there are still many foreign guests – about 65 percent of the club's clientele.

3. Martini with tomato juice as a masterpiece of mixology

The Russians who in the 1990s could afford Night Flight were not the most sophisticated club-goers and the shortage of produce inspired the staff's imagination. Inexperienced guests would believe a barman if he told them that a martini with tomato juice is the ideal cocktail and the latest mixology craze.

Nevertheless, Night Flight was teeming with excitement. "For every slow dance, future oligarchs would throw 100-dollar bills to the girls behind the tables, people on the streets were genuinely amazed and happy to see foreigners and Stockholm, in comparison to giant Moscow, seemed like an alley," says the club's general manager Swede Mats Jansson, who in the 90s was in charge of security, in an interview with the Afisha magazine in 2014.

4. Fights and a car in the door

Jansson remembers that time as being fun but dangerous. Night Flight was the first club in Russia to introduce a system of rigid face control and far from everyone was pleased with this. The club did not admit "bros" (Russian Mafiosi) in jogging suits and golden chains, only people in suits. Once, a guest whom the face-control bouncer did not allow to enter got so angry that he drove his car right into the club's front door.

Another time, Jansson remembers, a fight broke out in the entrance. Two of Muammar Gaddafi's son's bodyguards had a row while the Libyan leader was inside the club. But the conflict, as always, was soon settled.

The club's severe guards did not make exceptions for anyone. Admission into the club had (and has) a fee and once even rock star Bryan Adams was forced to pay. That day he and his band had been expected as the club's VIP guests. The other musicians came early but Adams was late.

The musicians were allowed in for free and without waiting in line, but when the Canadian rocker, who was no longer expected, finally arrived, he was forced to pay. The club manager was shocked but the security director said that Adams "could afford it."

6. A tsardom of prostitutes

"In the beginning of the 1990s meeting a foreigner was like winning the lottery," says Mats Jansson, adding that they attracted not only ordinary girls but also prostitutes. Judging by the reviews on the TripAdvisor site, even though the 1990s are long past, girls of easy virtue still frequent the club. "Everything is good but I won't let my husband go here alone," writes one visitor.

Jansson admits that 99 percent of the girls who come to Night Flight "are professionals." But the club itself, in his words, is completely legal. The prostitutes do not work there; they just come like the other guests, they pay to enter and for the drinks. What they do outside the club does not concern the management.

Read more: 5 Moscow restaurants where you can dine at the chef's table>>>