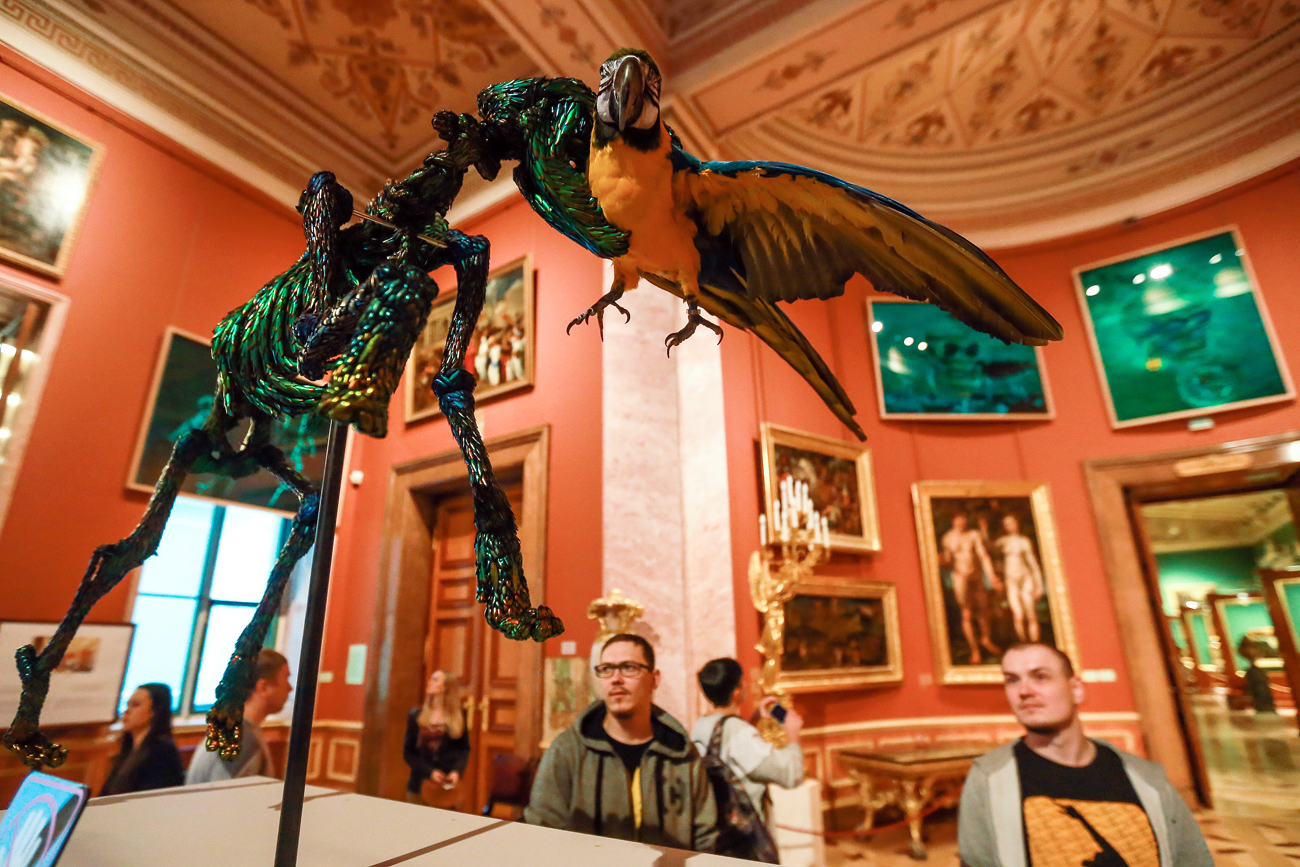 Sergei Konkov / TASS
An exhibition of works by a Belgian artist has led to online hashtag wars and calls for the director of the Hermitage to resign.

An exhibition featuring installations by the Belgian artist and theater director Jan Fabre at the Hermitage museum in St. Petersburg has provoked an outcry from both human rights activists and art lovers. The exhibition, entitled "Jan Fabre: Knight of Despair, Warrior of Beauty,” feature effigies of dead animals in installations with names such as Carnival of Dead Mongrels and Protest of Dead Homeless Cats.

Many visitors have had little positive to say about the exhibition, calling Fabre a “tramp” and a “pelt-skinner” and the works “an abomination.” Internet users have called for the exhibition to be closed and the museum’s director fired, posting messages with the hashtag #pozorermitazhu (“shame on the Hermitage”). Curator Dmitry Ozerkov said that the museum stands by its decision to display the works and that the exhibition will not be removed.

Fabre himself is a world-renowned artist whose installations have appeared in dozens of museums, including the Louvre in Paris, as well as at the Venice Biennale and “documenta,” an exhibit of modern and contemporary art that takes place every five years in Kassel, Germany.

“An effigy made from animals hanging on hooks is really a protest against the consumerist relationship of humans towards animals,” Fabre said, explaining the installations at the opening of the exhibit. According to Fabre, a dead dog is predominantly a metaphor, a self-portrait of the artist, because “the artist is a wandering dog.”

At the opening, the artist also reminded viewers that the animals used in the exhibition had been found dead on the streets.

Not all visitors accepted the explanation, however.

“To say that I was shocked is to say nothing really. We have hit rock bottom friends! How can such a world-class museum allow this exhibition to take place?!” wrote museumgoer Dasha Samyklina on her social media page after visiting the exhibit.

Another visitor, Svetlana Sova, echoed these sentiments and called on the St. Petersburg authorities to respond as Moscow officials had to another controversial exhibition. “People went there to admire the paintings, and were met with this horror…” Sova wrote. “In Moscow, they shut down a pedophile exhibition, yet at the center of our northern cultural capital some sadists have hung up a string of murdered animals on hooks.”

Sova’s comments referred to an exhibition by Jock Sturgess at the Brothers Lumiere Photography Centre in Moscow of photographs taken in a nudist colony. Photos that depicted minors were brought to Moscow but not displayed, although later people found copies of the images online and reposted them.

The Fabre exhibition opened on Oct. 21, but as with the Sturgess exhibit, those opposed to it on moral grounds did not notice it for several weeks. Once the first complaint appeared, however, news of the exhibit spread rapidly via social media. In many cases, actual information about what was on display was interspersed with exaggerated rumors, including comments about children being admitted (although access to the exhibit is restricted to visitors over 16), a description of an installation featuring crucified cats (although there is no such installation) and fake photos of the works. Well-known conservative politicians and cultural figures hurried to speak out against the exhibit. Vitaly Milonov, a State Duma deputy from St. Petersburg who is known for his outspoken hostility towards homosexuality, among other things, said the exhibition “spit on the soul of the Russian people.”

The hostility towards the exhibition was compounded by an incited in the city of Khabarovsk (5,100 miles east of Moscow) that took place this fall. Two local students were accused of dismembering animals they took from animal shelters. The girls had tortured the animals in an abandoned hospital and took photographs of their crimes.

“Obviously we understand what we are doing,” said Ozerkov, who is the head of contemporary art at the Hermitage in addition to being the exhibit’s curator. “We have written and talked about the fact that this exhibition will be difficult and will need understanding from many sides.”

He mentioned that neither the Russian Constitution nor the EU Charter of Fundamental Rights includes animal rights laws and that the sale of dog and cat fur is not illegal. The exhibit is raising awareness of these issues.

“The public’s reaction shows that we have made a great exhibition which hit society where it hurts,” Ozerkov said. He added that the hostile online reaction was a deliberate provocation and “a false denunciation of contemporary art, museums, and a free society.”

Hermitage supporters also took to the Internet to remind readers that many museums in Russia have been displaying stuffed animal carcasses and even preserved human fetuses for years. “What would happen if these people went to the Zoological museum or the Kunstkamera?” wrote Elias Panov, referring to the museum in St. Petersburg that has displayed a number of preserved “natural oddities” since the time of Peter the Great. Hermitage supporters are using the hashtag ‘#koshkizafabra’ (“#catsforfabre”), referencing the famous Hermitage cats.

The Russian Ministry for Culture has declined to take sides in the debate, releasing a statement saying only that the Hermitage has great independence and freedom, and should therefore “determine its own priorities when creating exhibits” and making artistic decisions.