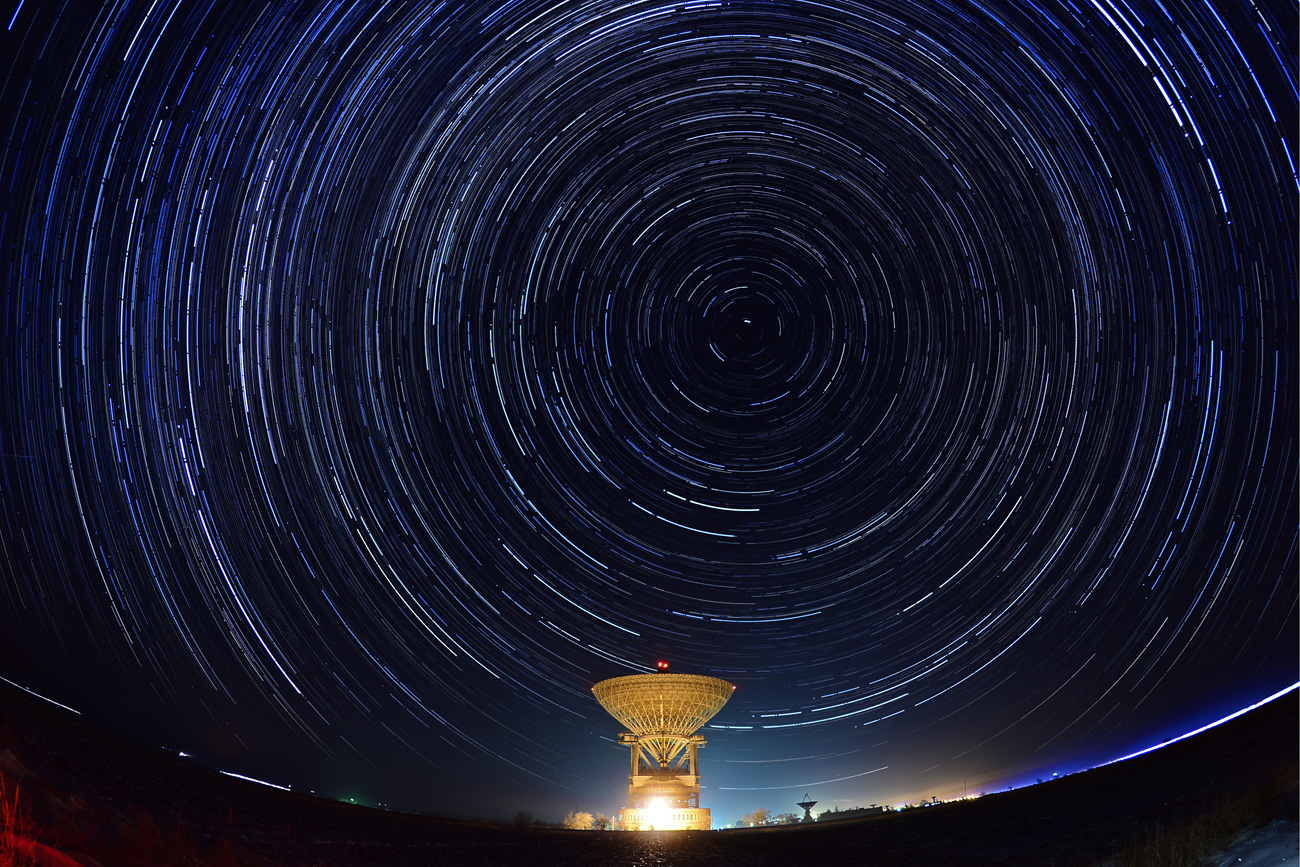 Meteors streak across the night sky over the Galenki RT-70 radio telescope.

Yuri Smityuk/TASS
Meteorites have been landing in Russia's Far East for millennia. From a couple pounds to 100 tons, these astronomical bodies have left their mark on the landscape, and even postage stamps.

On December 6, a meteorite fell in the Sayanogorsk district in the Republic of Khakassia. According to preliminary reports, the celestial body was about 32-50 feet in diameter and it had either a rocky or rocky-water composition. Scientists said that such celestial bodies fall to Earth every day.

This is one of the largest and most famous meteorites to have ever fallen not only in the Far East but on the planet. On the morning of February 12, 1947, the residents of the Primorsky village Beitsukh saw a bright object in the sky, after which there was an explosion. Specialists discovered 106 craters and holes with a diameter of three to 92 feet and a depth of six feet. It was determined that the Sikhote-Alin meteorite weighed about 100 tons.

One of the witnesses to the meteorite's fall was painter Petr Medvedev, who was drawing a picture of the local landscape at the time. Ten years later, his drawing of the meteorite appeared on a postage stamp.

On October 18, 1916, there was a powerful explosion three miles from the Boguslavka village. A large cavity formed on the location of the fall, which later became a lake. The body of water does not exist anymore, but the contours of the lake can clearly be seen today.

This meteorite is considered to have been one of the biggest that people were able to observe. It weighed 564 pounds.

The finder, L. Tynavie and the meteorite Omolon / Archive photo

This meteorite fell to Earth on May 16, 1981, not far from the Omolon village in the Magadan Region. Reindeer breeder Ivan Tynavi was the only person who saw it fall. He took a small fragment of the meteorite and for several years carried it around with him in the tundra. In 1989, scientists in the Far East learned about Tynavi's discovery.

The Omolon meteorite, which weighed 551 pounds, is a priceless exhibit because of its type (the rare pallasite class) and form (a perfect four-sided pyramid).

On July 10, 1977, gold mine workers in the Aliskerovo village in Chukhotka's Bilibinsky District were dredging the soil when they discovered a small metallic object resembling a spindle. At first the discovery was not given much consideration but then one of the workers suggested that it could be a meteorite. They decided to wait for a professional opinion from an expert geologist, who indeed confirmed the assumption of the object's extraterrestrial origin.

During the examination of the meteorite, it was concluded that the celestial body had fallen to Earth several thousand years ago.

Another meteorite in Chukhotka's Bilibinsky District was found on June 20, 1981, and also in a gold mine. At a 43-foot depth, bulldozers came upon a molten metal lump that had been wedged into the permafrost. The 220-pound discovery was carefully extracted and sent to Magadan for tests. Geologists concluded that the metallic meteorite had fallen to Earth about 3,000 to 6,000 years ago.

This is the "northernmost" meteorite of all the ones that have ever been discovered by man. In 1990, Vadim Ryabchun, an employee of the RAS Far Eastern Division Magadan Geological Museum, found it on Yakutia's Arctic coast. The rock, which had a heavily melted and oxidized surface, had fallen to Earth about 10,000 years ago.

Although the meteorite's weight was only 2.5 lbs., a piece less than half an ounce was sent to Moscow for analysis.