7 facts about the Cottage Palace, a gift from Nicholas I to his wife 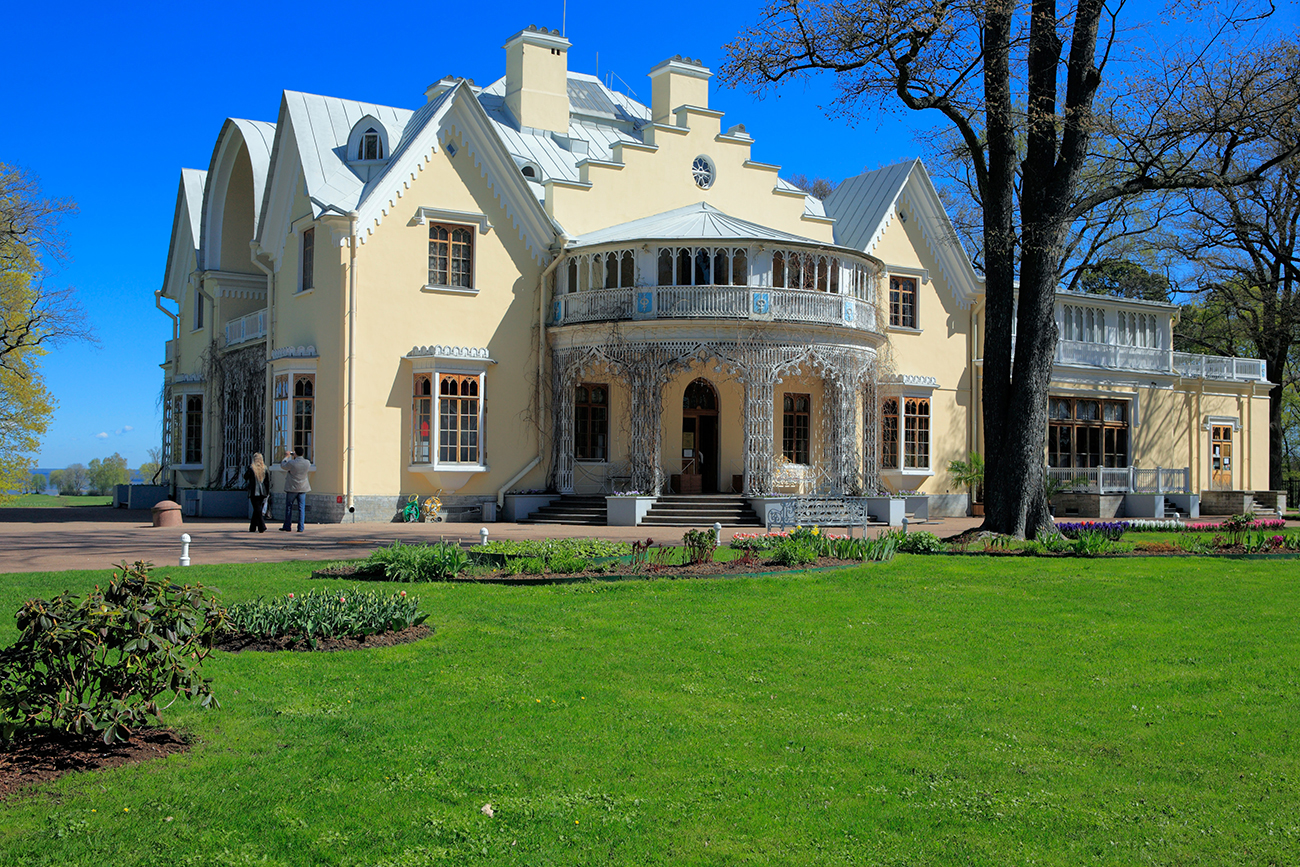 Legion Media
This country house, built on the outskirts of the Peterhof estate near St. Petersburg, is a dacha that the emperor built for his beloved wife. Thе Cottage Palace combines luxurious palace interiors with familial comforts.

Nicholas I (1796-1855) married German Princess Friederike Louise Charlotte Wilhelmina, daughter of the Prussian King, and she became known as Alexandra Fyodorovna after converting to Orthodoxy. Their partnership definitely had political advantages, yet its basis was in love. When Napoleon seized Berlin, Frederick William III's family asked Russian Emperor Alexander I for protection, which eventually resulted in a romance between the princess and the emperor's brother Nicholas I. The princess did not expect to become empress, since it was Alexander's eldest brother Konstantin who was in line to inherit the throne. However, when Konstantin stepped down in 1825, Nicholas I took his place.

One of the fruits of their great love was the Cottage Palace, which exists in its original form to this day. Here are some interesting facts about the place where the royal family went when they needed to get away from the hustle and bustle.

1. The Cottage Palace was the tsar's private home

Unlike the imperial palaces of Peterhof, Tsarskoye Selo and Pavlovsk, the Cottage Palace was never considered an official state residence. The cottage was not designed to impress foreign ambassadors with its architecture and sumptuous interiors, or to entertain members of the court and inspire awe in the subjects. It was designed and built as an isolated family abode, even if that family was royalty. This was what the couple valued most about the residence.

2. The residence was a present to the tsarina 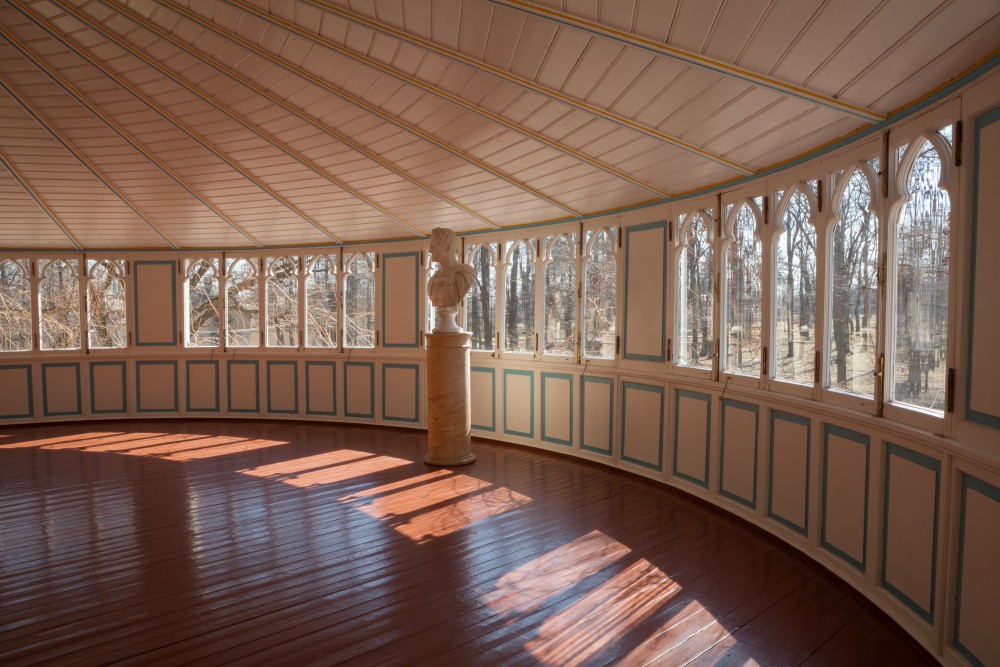 Inside the palace. Source: peterhofmuseum.ru

This palace was constructed as a gift. Nicholas I built this residence for his wife Alexandra Fyodorovna, who did not like the massive gilding of the official palaces. This is why the palace is located on the outskirts of the estate, far from the Grand Peterhof Palace, and is a place not many visitors are likely to tour today.

3. The design was based on the English style 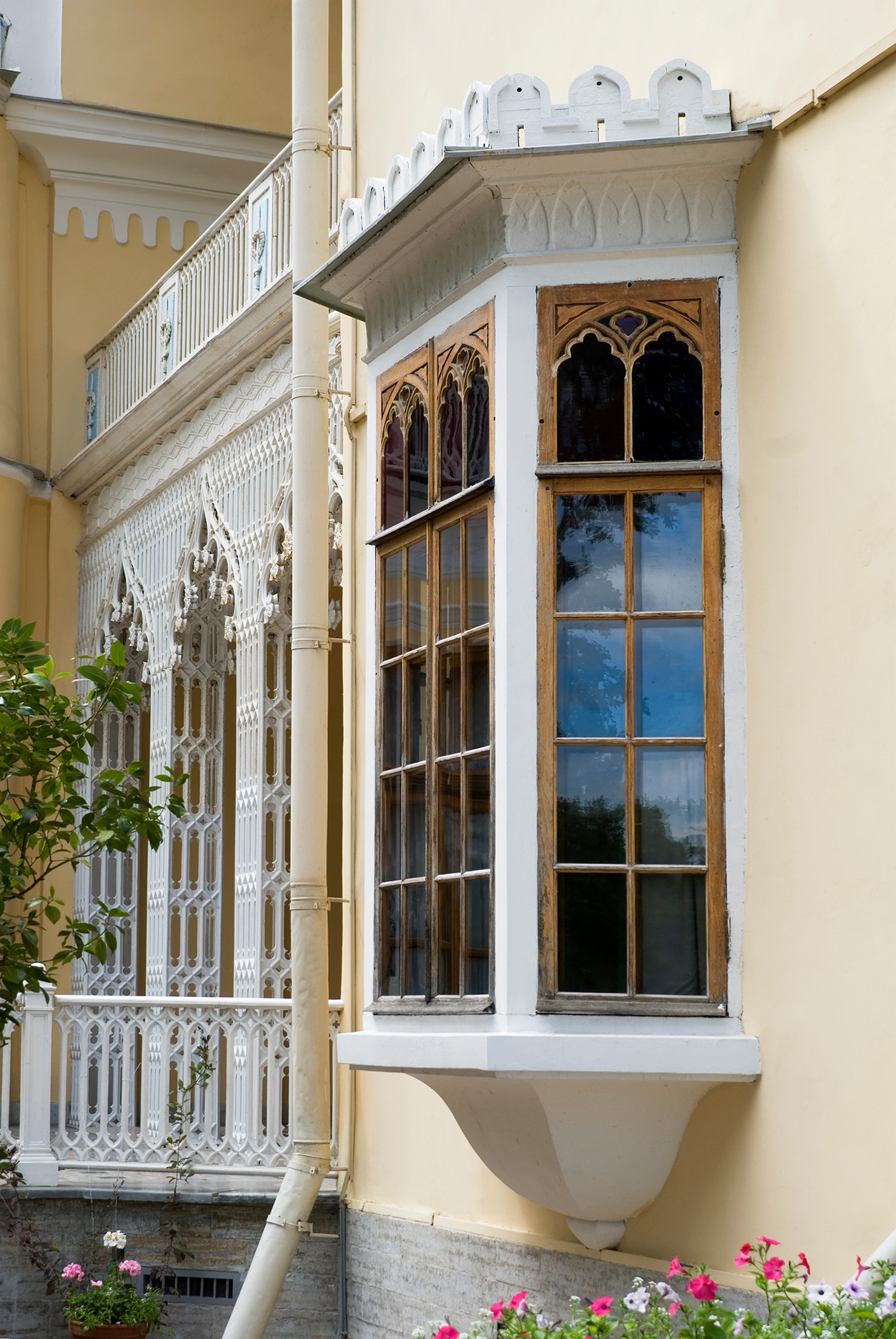 The palace was built over the course of three years, between 1826 and 1829. At the time, the official style of the early 19th century, the Empire style, was already being replaced by Revivalism. Court architect Adam Menelaws, a Scotsman, constructed the palace in the neo-Gothic style. Steep roofs, pointed arches and windows and balustrade balconies on the exterior were complemented with fan-shell stucco ceilings and crown molding featuring trefoils and cruciferae in the interior. This style can be observed even in the smallest details, such as the cast-iron spiral staircase, furniture, clocks and candelabras.

4. It was named after the tsarina 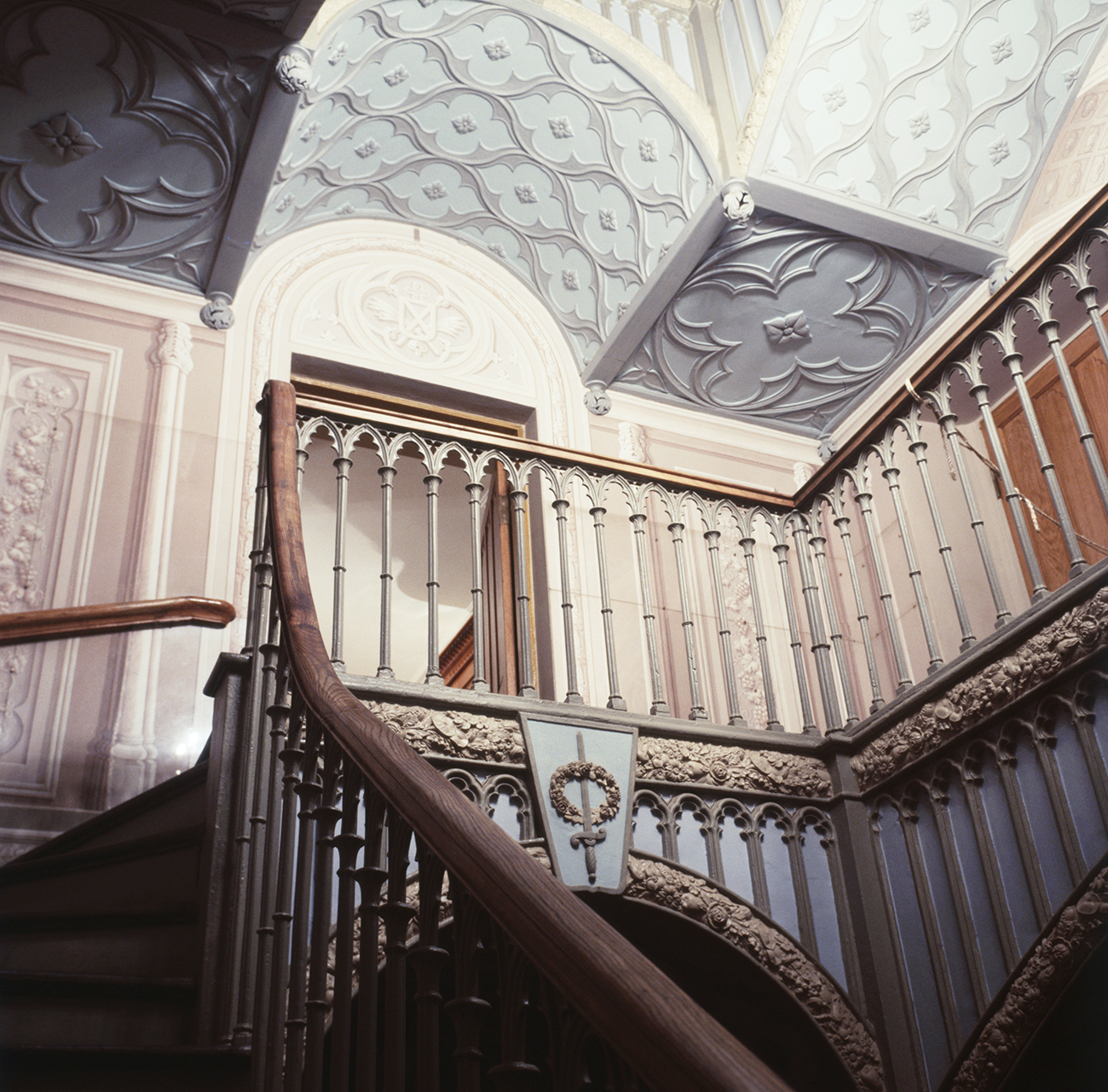 A coat of arms of the residence. Source: TASS

In the 19th century, the official name of the palace was Alexandria, in honor of Alexandra Fyodorovna. At Nicholas I’s request, the famous Russian poet, Vasily Zhukovsky, created a coat of arms for the residence featuring a blue heraldic shield with a knightly sword and a garland of white roses, which were the empress' favorite flowers. Zhukovsky also coined the motto, "For faith, the tsar and the fatherland." This coat of arms is found not only on the facades but also on many objects inside the palace.

5. The palace opened its doors to the public once a year 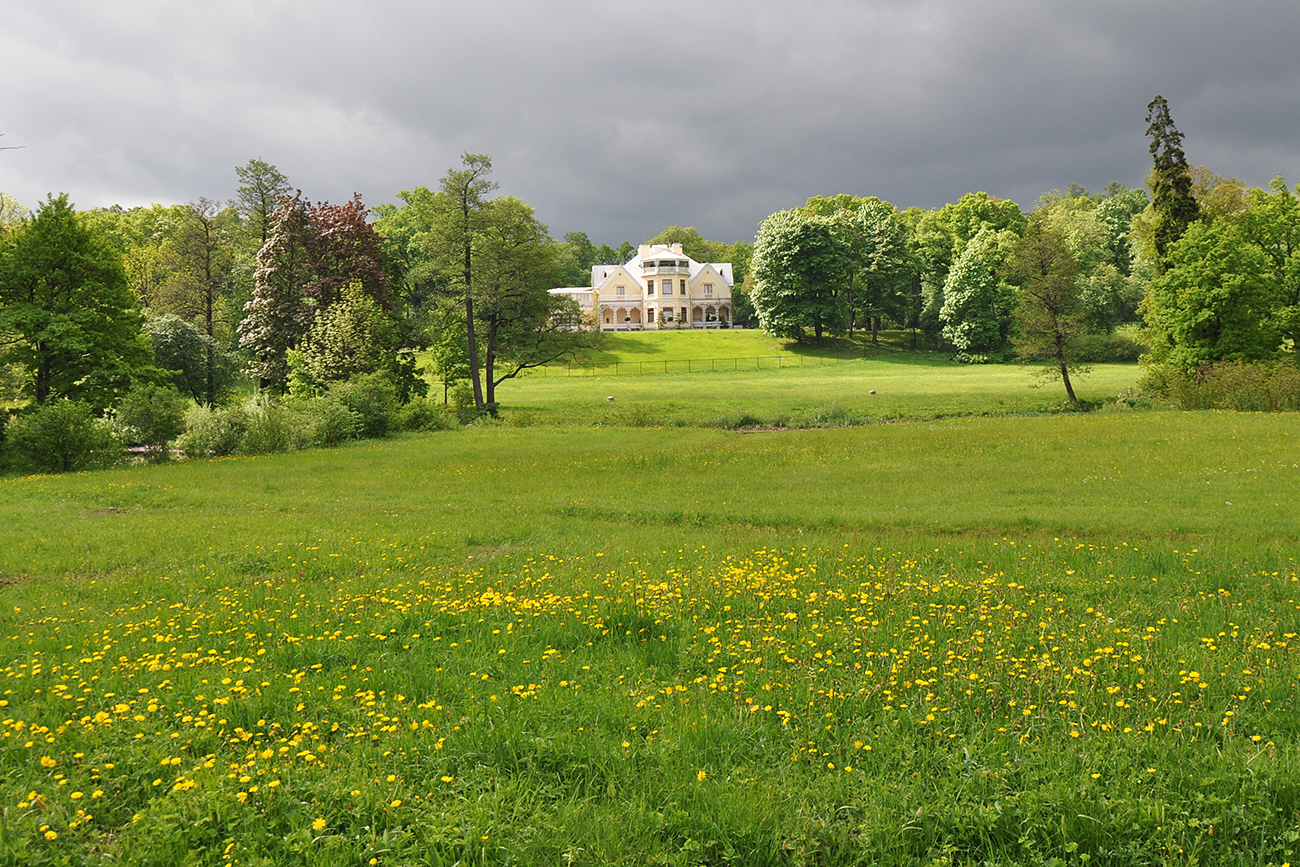 A garden around the palace. Source: Legion Media

Once a year in mid-July, on the occasion of the empress's birthday, the garden around the palace was opened to all. For the rest of the year, this territory was strictly prohibited to outsiders. Among the rare guests to the palace was the French tourist Marquis de Custine who described his journey to Russia in a book published in 1839. According to his description, the palace resembled the home of "a wealthy and elegant Englishman."

6. It was equipped with plumbing and ventilation 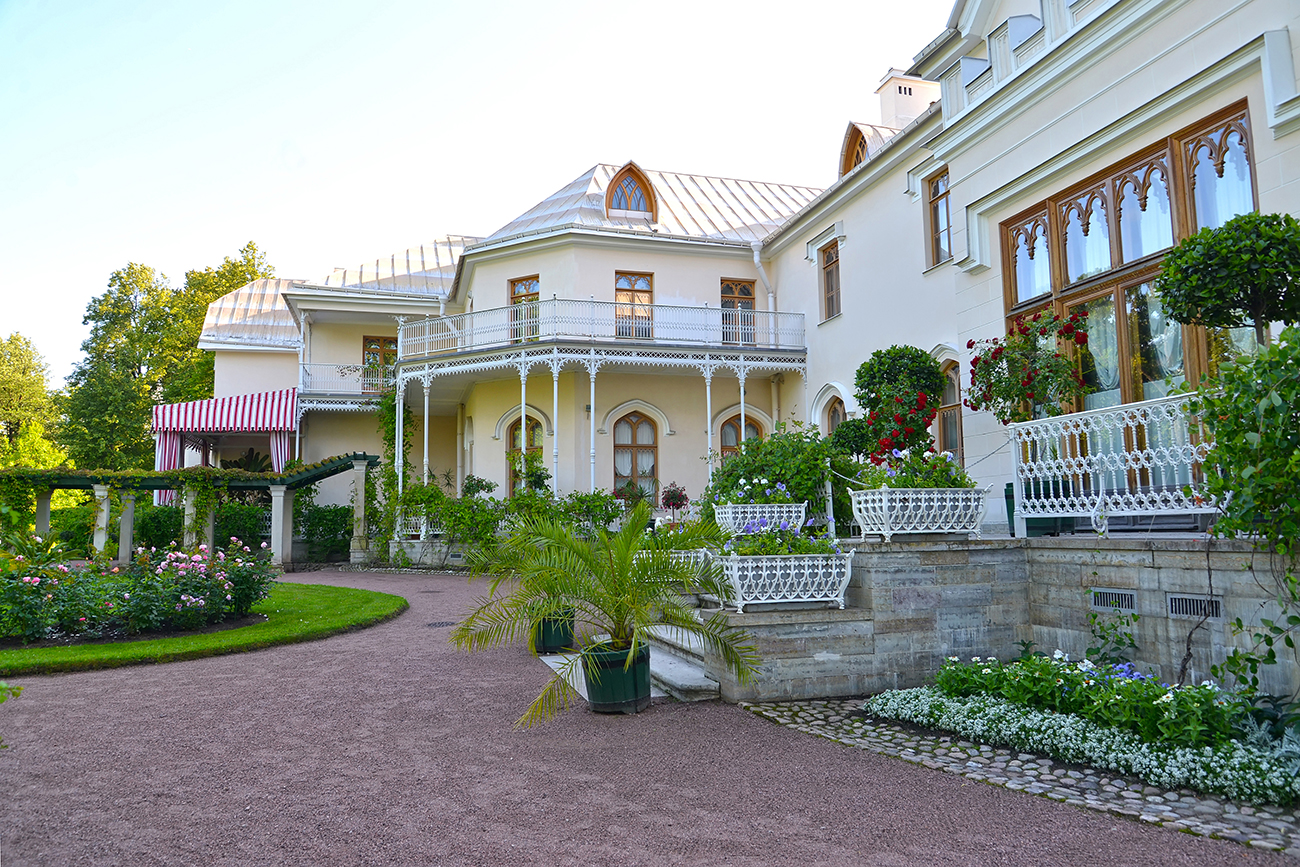 The three-story, 27-room manor was equipped with the most advanced technology of the day, which significantly reduced the number of servants, and guaranteed the couple their desired privacy. There were pumps that brought water to the bathrooms and ventilation and radiant heating systems that helped maintain temperatures in the rooms. The kitchen was located in a separate building and food was brought and served at appointed hours.

7. The palace has remained intact 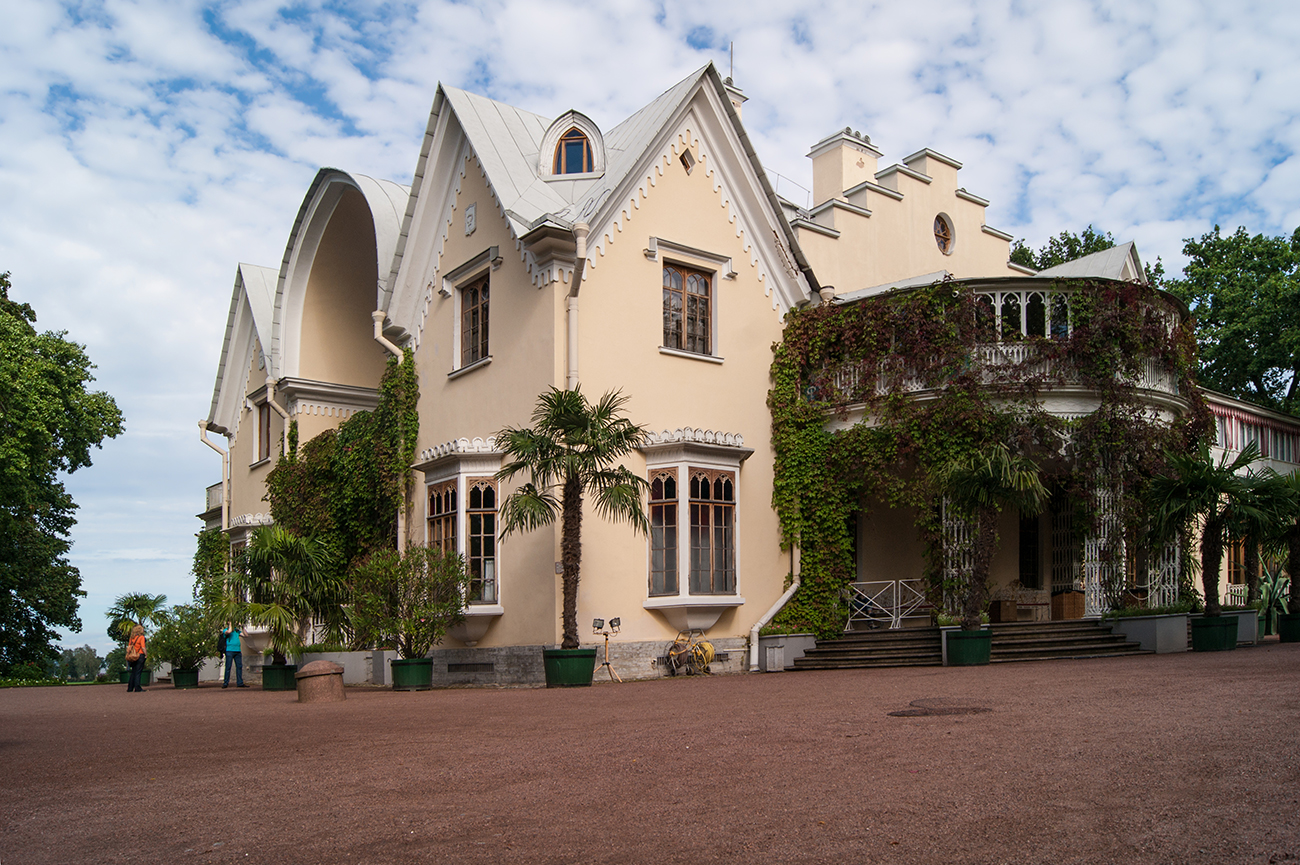 The palace still remains intact, having survived the Revolution and World War II. During the Soviet era, authorities wanted to transform the building into a reception hall but the museum directors resisted. As a result, what we have today is an authentic monument to the private lives of 19th-century Russian royalty.

Read more: 7 palaces in and around St. Petersburg you should visit right now