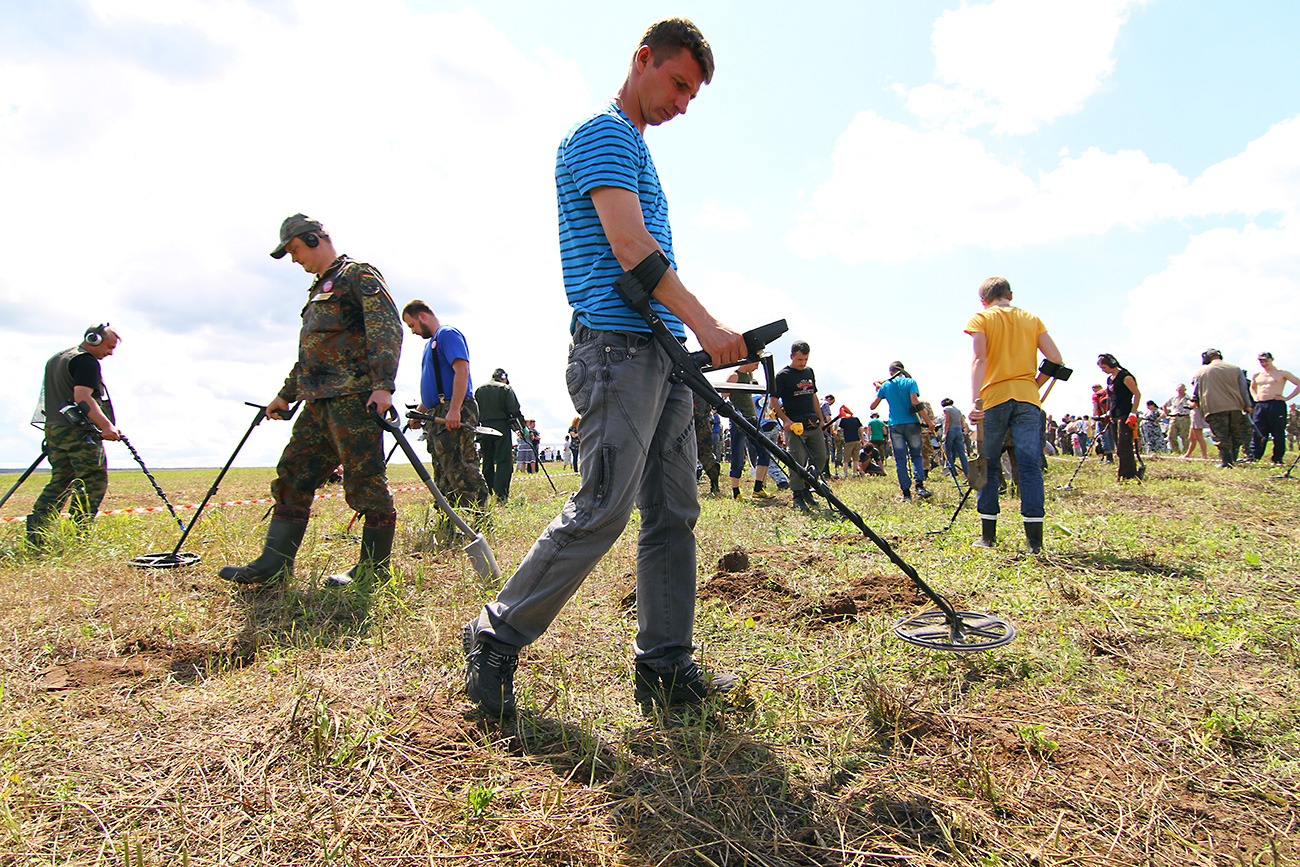 Anton Novoderezhkin/TASS
After you’ve done the necessary sightseeing and have travelled around the Golden Ring, try something that around two million Russians like to do – test your luck searching for treasures in the countryside with a metal detector.

There are many people in Russia who have made a hobby of searching for old objects, but in 2013 the Russian authorities introduced a new law, which basically puts them at risk of being fined or imprisoned.

While the law has prompted large public debate it is still not totally clear as to whether all those who search for various objects in fields using metal detectors will face punishment.

According to the law, you need to obtain special permission from the Russian Ministry of Culture to carry out digging activities. This, however, is quite complicated and requires gathering many documents and a submitting a detailed explanation about your future expedition. The permission will only last for up to three months and even professional archaeologists might have problems obtaining it.

If you find anything on a treasure hunt you will need to share it equally with the owner of the land where it was buried. If an object has cultural value, it should be handed over to the state bodies.

Legally, even if you find something valuable by mistake you must inform the authorities and hand over the objects.

What is certain is that it is definitely a bad idea to deliberately search for old historical artifacts in a place marked as a cultural heritage site (a former settlement, barrow or a place of ancient religious rite). For this, you will surely end up in jail or risk paying a fine – up to 1 million rubles ($17,700).

To avoid any risk, Russian treasure hunters recommend choosing the place of your potential search very carefully by checking with online databases of historical and cultural heritage sites (available on the Russian Ministry of Culture’s website).

How big is the risk?

According to Vyacheslav Suskov, a modern-day treasure hunter from St. Petersburg, there have been a few arrests since the law was introduced. If you are spotted on a cultural heritage site with artifacts in your pocket and there are eyewitnesses around, then you risk being fined and all the objects will be confiscated.

“Over the last four years there were around 5-7 cases that I heard of,” Suskov told RBTH. “These are usually serious cases when a significant layer of the land was harmed or ancient burial sites in the Krasnodar Territory or historical settlements in Novgorod were affected.”

Small-scale searches by enthusiasts might also invite the ire of the authorities. Back in April 2017 Russian authorities carried out their first raid on such treasure-hunters near Troitsk, which was the venue of fierce military clashes between Russia and Napoleon’s Army in the 1812 war.

The Moscow City Heritage Committee along with local authorities aims to stop those who might carry out illegal searches, according to Leonid Kondrashev, the chief archaeologist of Moscow.

What can you search for?

The law forbids looking for objects that are more than a hundred years old, but a search using metal detectors is not banned.

“What you can look for are fragments of meteorites, lost jewelry, keys, phones, coins and scrap metal,” Suskov told RBTH.

As for legendary treasures, it will take too much time and resources.

“The information about their whereabouts is often too contradictory and sometimes it encompasses very large territories that cannot be properly explored,” Vladimir Poryvaev, another Russian treasure hunter and owner of his own treasure hunting bureau, told RBTH. “Such riches are more likely to be found by mistake.” 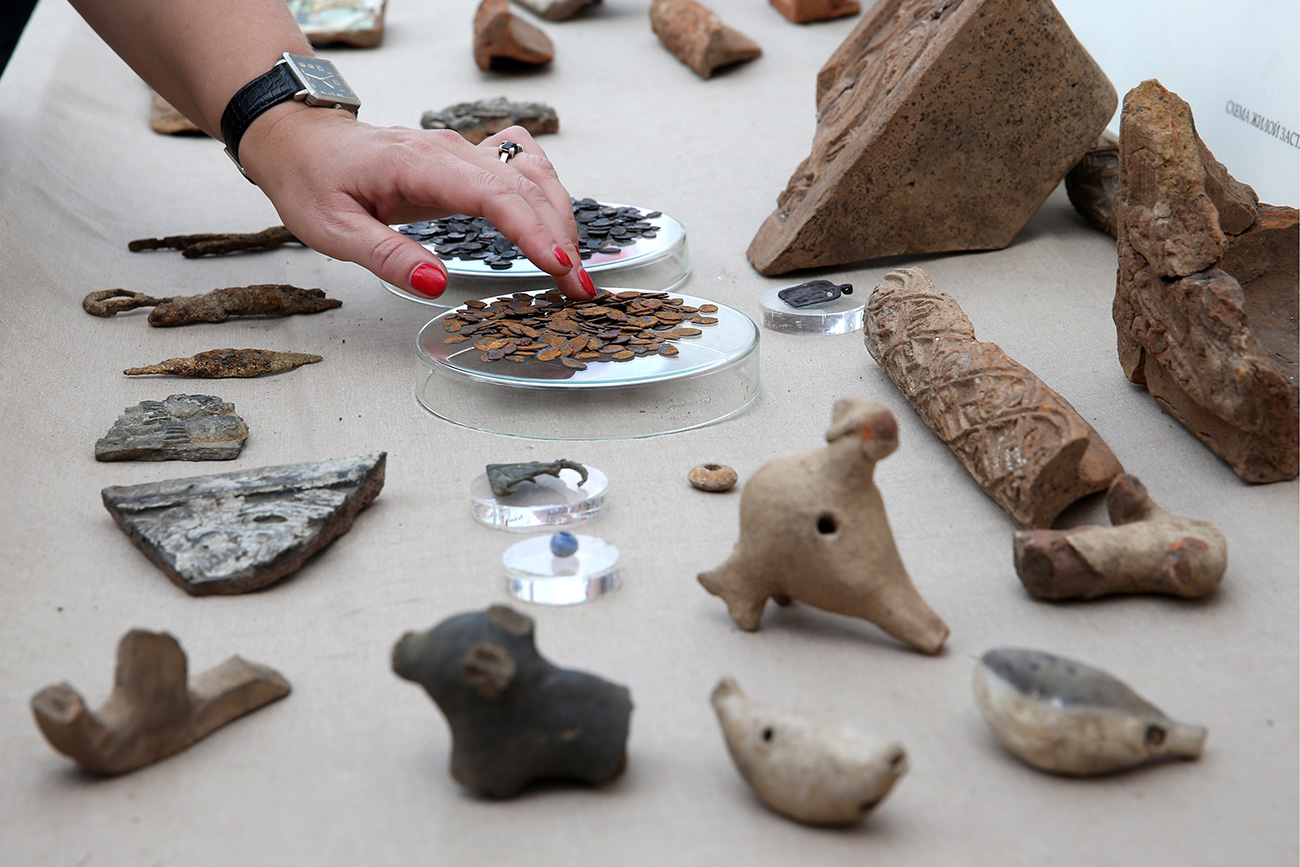 A treasure discovered during archeological excavations in Kadashevskaya Settlement in Moscow. The treasure is dated by the time of Tsar Alexis of Russia (1629—1676). / Vyacheslav Prokofyev/TASS

Will you be able to take your treasure abroad?

You can give it a try, but Customs officials are highly likely to confiscate the items. According to Suskov, there were cases when even cheap coins from the beginning of 20th century were confiscated to check their value.

“Objects that are more than a hundred years old may have some sort of historical value. Plus, a Customs official might not know whether the object was bought for 100 rubles in a shop or if it was secretly found somewhere in the area of the Tauric Chersonesos [an archaeological site in Crimea] ruins,” Suskov says.

What if you don’t want to take risks?

Legal restrictions do not stop Russian enthusiasts, but there are still other ways of turning your visit to Russia into a more exciting adventure.

If you are interested in discovering something significant and truly historical as well as learning about Russian history and archaeology, think about joining one of the expeditions that Russian archaeologists offer during the summer.

For that, you don’t need to have any special qualifications in history or archaeology – just a good understanding of the Russian language will do.

A pair of extra hands is always needed during expeditions and all expenses are usually taken care of by the organizers themselves. You might only need to pay for your travel to the place of the expedition.

There are various opportunities advertised by the Archeology Fund, the Russian Geographical Society and Russian-speaking social media groups.

How can you avoid problems?

If you are still up for a challenge, here are a couple of pieces of advice from Russian treasure hunters to keep in mind.

-  If you are stopped by the police, never say that you are searching for artifacts. You can only look for allowed items: scrap metal, meteorites, modern jewelry and other small objects.

-  Policemen are not interested in arresting you (they'd prefer to focus on serious criminals) so never give them a reason to detain you. To prove your guilt, the police will have to gather substantial evidence (photo and video, inspection with eyewitnesses and expertise), which is quite time-consuming.