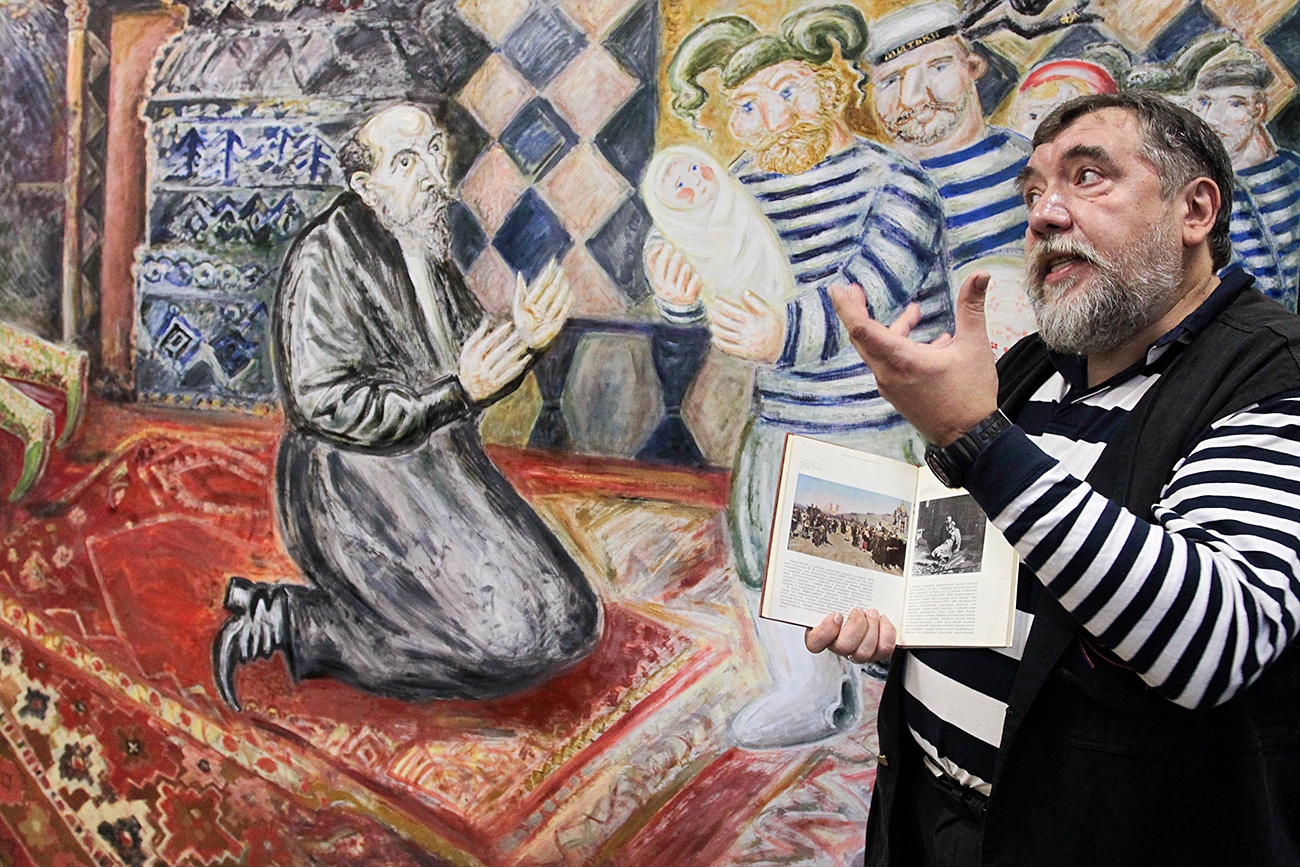 Dmitry Shagin and "Mitki Bring New Son to Ivan the Terrible" painting, at the Mitki-Art art center in St. Petersburg.

Anatoly Medved/RIA Novosti
St. Petersburg was always famous for its informal art and abundance of creative minds. But the Mitki art group have not just become world famous, they’ve created an entire subculture.

The Mitki art project was conceived as a parody of artistic subcultures, but ironically it quickly became a symbol of Russian underground art of the late 20th century, offering audiences a particular take on everyday reality. The work of the Mitki artists was very popular in the USSR, and it continues to be displayed in the country's leading museums. RBTH looks at the path of accidental success taken by these artistic pranksters.

Urban folklore of street sweepers with a Russian soul

The Mitki name derives from its founder, St. Petersburg artist Dmitry Shagin, whose nickname is simply, Mitka (or Mityok). Their first exhibition of naïve paintings was held in a private apartment in 1985 but was broken up by Soviet police. Then, hostile articles began to appear in the Leningrad press.

This persecution only fueled the Mitki’s popularity, and Shagin was dubbed the "country's main Mityok." In their paintings, the Mitki's home city of Leningrad (St. Petersburg) is sometimes represented in a romantic way as in children's drawings, or it recalls the propaganda posters of Soviet years.

With their talent for combining humor and tragedy, the Mitki brought optimism to the masses despite the grim reality of the 1980s. Their work has been described as "urban folklore," with its frank and guileless look at life that reveals the beauty of commonplace things.

The artists painted historical, literary and cinematic subjects, and also cheekily reworked paintings by famous artists. The painting, The Mitki Write a Letter to the Oligarchs, is based on Ilya Repin's famous canvas, The Cossacks Write a Letter to the Turkish Sultan. In their reinterpretation of art, the Mitki gave expression to the worldview of a generation of "street sweepers and janitors," those intellectuals of the 1980s who dissented from official state ideology.

How to recognize a Mityok

The Mitki's trademark accoutrement was a striped vest and the obligatory beard, as worn by "people highly esteemed by the Mitki such as Pushkin, Lermontov and Dostoyevsky," wrote the movement’s main ideologist, artist and writer Vladimir Shinkarev, in his book, The Mitki. They were also frequently depicted wearing a sheepskin coat and felt boots.

The Mitki propound Christianity, humility and love for their fellow man and for the world around them. They express emotions using special slang, which has entered the popular language. One of their favorite expressions, "yoly-paly," can express a whole range of sentiments depending on the context: "from slight romantic sadness to heartrending fury," Shinkarev wrote. 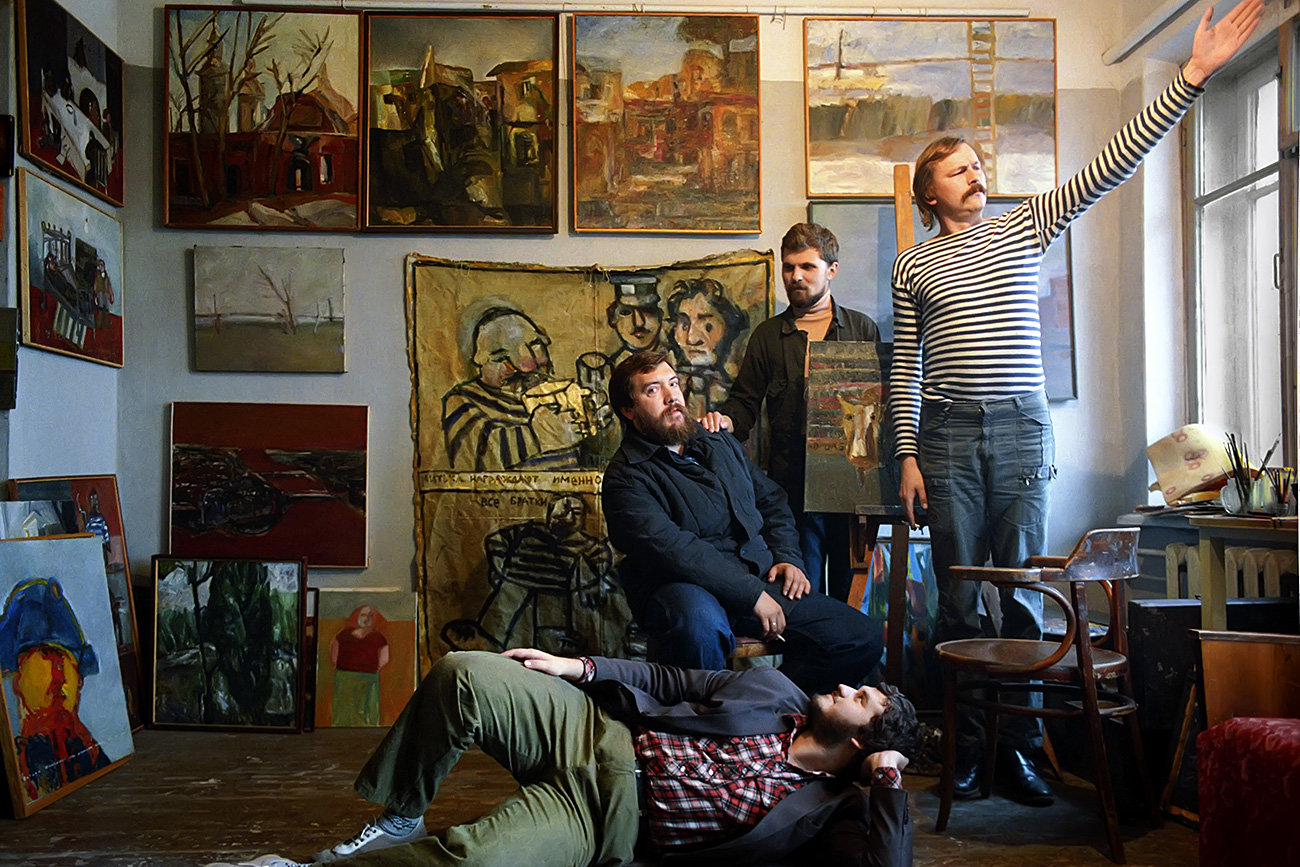 Dmitry Shagin (L), leader of the Mitki artistic movement, in a studio with his associates. Source: Igor Mikhalev/RIA Novosti

One of the most popular words in the Miktki lexicon is "Dyk," which can stand in for practically any word or expression. "Dyk" with an interrogative intonation means "How?", "Who?", or "Why?", but more often than not it denotes a reproach as in "How come?", or "Why should they treat a Mityok like that?"

"Dyk" with an exclamatory intonation signifies lofty self-confidence, agreement with what someone else has said, or a warning. "Dyk" followed by an ellipsis means an apology or an admission of a mistake or even of a reprehensible act.

The language that the Mitki use among themselves is liberally sprinkled with quotes from old Soviet films and cartoons, and they call everyone around them "little brother" or "baby sister."

After a few years, the Mitki began to be joined not just by artists from St. Petersburg, but also by musicians, poets, writers and even numerous sympathizers who shared their views. The Moscow Mitki were set up, as well as Mitki chapters in various Russian cities. Each new "generation" broadens the Mitki's lexicon and adds new themes to the movement's stock of subjects. 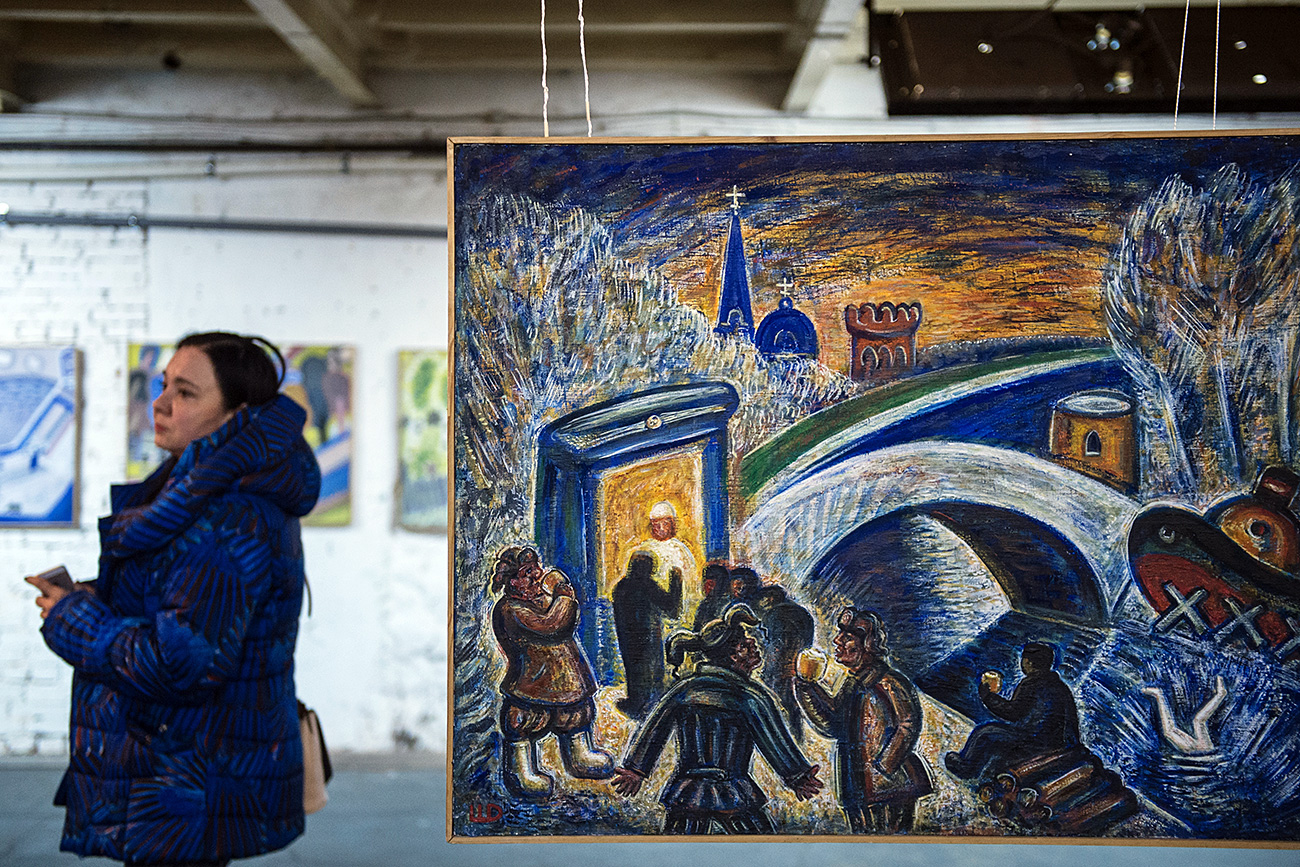 'The Fall of Icarus' painting at the exhibition in Moscow. Source: Evgenya Novozhenina/RIA Novosti

"We're even recognized in the street and allowed to skip the queue to buy wine," St. Petersburg artist Andrei Filippov said in an interview with the online magazine, Afisha Daily.

In 1989, exhibitions of the Mitki's artworks were held in Antwerp, Cologne and Paris. The story of the tour formed the basis of the film, "Yoly-Paly, or the Mitki Go to Europe" by director Alexei Uchitel. The year 1992 saw the release of an animated film based on themes taken from the artists' stories, "The Mitki Don't Want to Defeat Anyone, or Mitki-Mayer."

Subsequently, the artworks of the Mitki began to be displayed in galleries in Finland, Italy, the U.S. and even the State Russian Museum in St. Petersburg. Without expecting it, the Mitki turned into the opposite of their own myth and became acclaimed artists prized by museums, as well as the topic of articles and books of art criticism.

The movement's proponents like to shock the public and have an ironic take on everything around them. Thus, in 2013, Dmitry Shagin and his friends mounted the event, "The Mitki Give Ivan the Terrible a New Son," (on the cover photo) proposing that the Russian culture minister replace pictures in the Tretyakov Gallery with "more appropriate" ones, and also to give Ivan the Terrible a new son to replace the one depicted in Ilya Repin's painting, Ivan the Terrible Murders His Son. 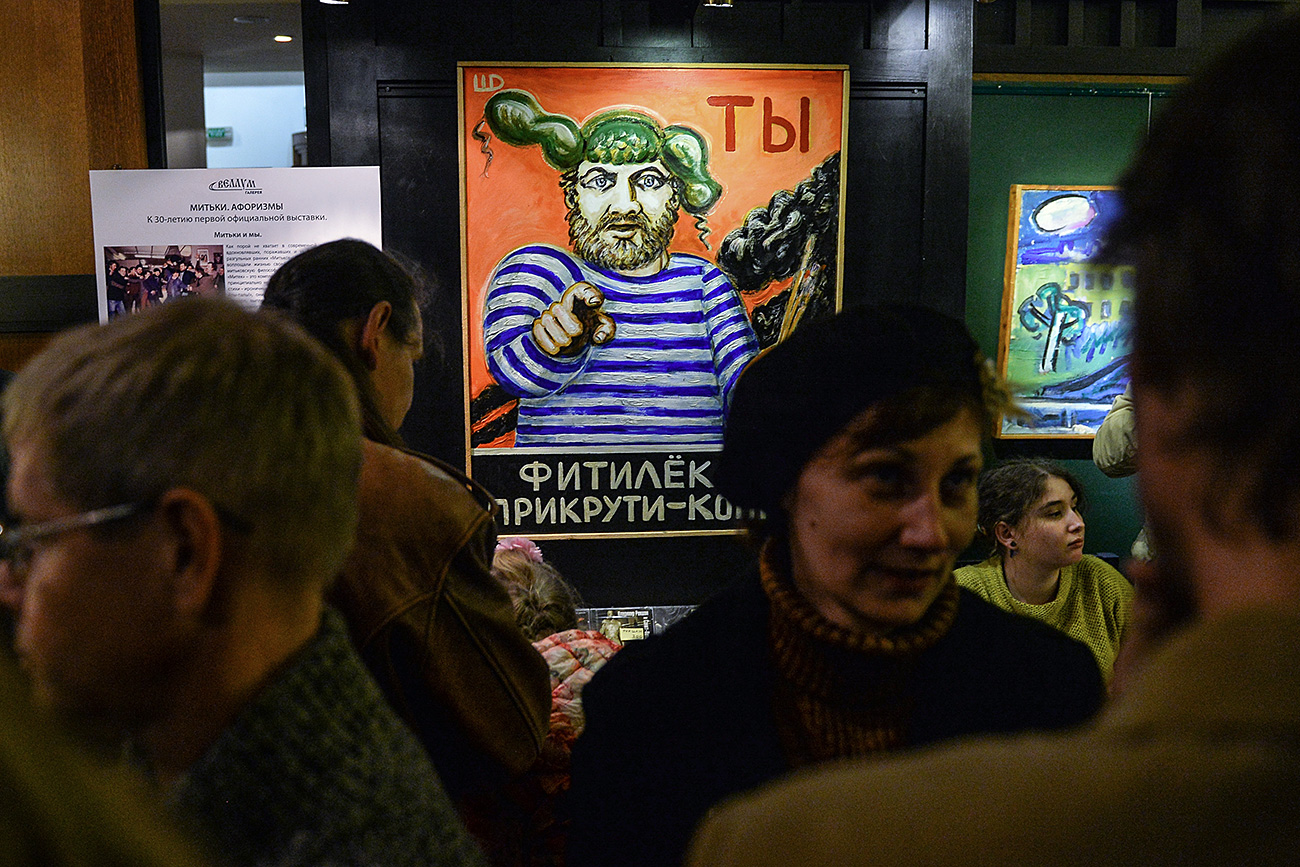 The Mitki's irony, however, does not mask a sneer, and their philosophy is based on optimism, freedom and sincerity. The Mitki even offered to donate their ears to Van Gogh, who cut off his earlobe. They also paint subjects taken from current affairs, as exemplified by Vasya Golubev's, Mitki Send Brezhnev to Afghanistan, and Dmitry Shagin's, Putin Pardons Pussy Riot.

A Museum of the Mitki Creative Association was opened in St. Petersburg in 2006, and it’s now a mecca for fans of the contemporary Russian avant-garde and independent art, and the St. Petersburg counterculture. Here, you can meet the old-timers and founders of the movement, as well as younger artists, and buy a picture if one strikes your fancy.

Read more: ‘Art for booze’ – St. Petersburg artists give away paintings for drinks